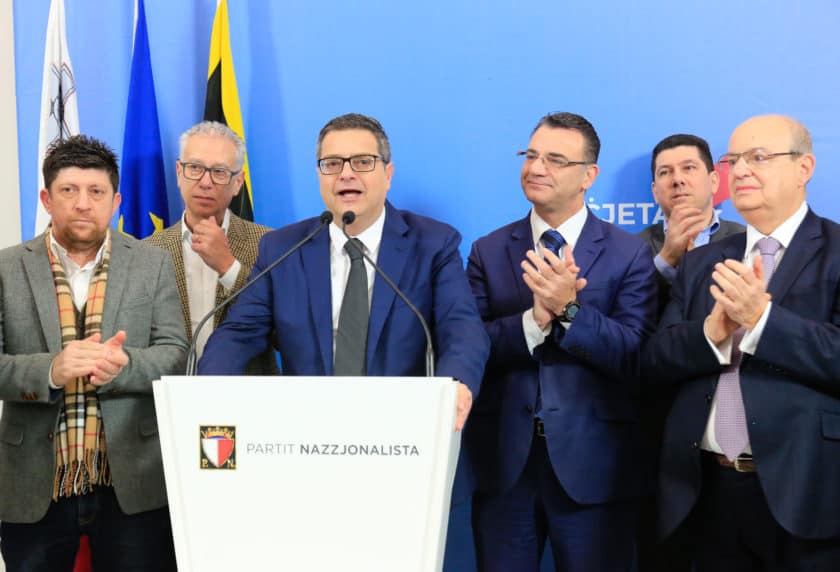 The Executive Committee of the PN, composed of some 70 accredited individuals, convenes this evening to discuss the party current situation. It is reported that the party leader will be proposing a strategy towards a way forward. This initiative, on the advice of his persons of trust, is however eclipsed by a remarkable threat; side-lining the Group of 19, and other seasoned political actors, if these still contest his reconfirmation as party leader.

This is departing on a wrong foot. Adrian Delia’s good intentions in his leadership are characterised by the absence of diplomatic tact in his approach to possible adversaries – those with different opinions, and by acts of submission disguised as a belief in openness and fortitude. The end result is questionable on both an electorate and on a party support level. Forget the surveys and electoral results for a moment. It was a known fact that the party had to face an uphill struggle.

Originally the revised Statute would have identified a separation/division between the Party Organisation, whose officials would be non-MPs, and the Parliamentary Group whose Chairman acts as party leader, responsible for the parliamentary programme and assisted by his specialised committee groups of MPs. This would have provided for a mechanism focussing on integrative party leadership with overlapping decision-making processes in connection with the party’s political programme. It is questionable up to what extent the present complex party structures provide for such open deliberation.

The Group of 19 and its followers, that include a number of party stalwarts that rally around Adrian Delia out of respect to the party itself, should propose yet a further free, open and articulated objective and data-based discussion on the party leadership, the possibility of the PN ending with less than 33% of electorate votes and the party’s potential as an alternative government, prior to discussing Adrian Delia’s proposed strategy that could invoke a vote amongst party members.

Discussing membership is a cause to raise eyebrows. Just recall what Robert Arrigo said few days ago. His wider interpretation of membership is that these are just party donors. They are not expected to be active in politics, to participate in party discussion, to put forward proposals or to, through their representatives, register with the party leadership their “ayes” and “nays”.

For many years the PN has interred all notions of intra-party democracy and deliberation on leadership organisational matters. For years the party immersed itself in parochial scuffles. The main item on the agenda was ‘power’, not necessarily leadership. In a presumed open and democratic party, leadership is inspired by a dialogue with faith (the source of existence of all humanity) striving for the common good of the individual and his communities and associations he forms part of. There is no room for submissiveness.

Howard Elcock (2001) considers that “political leadership is a concept central to understanding political processes and outcomes, yet its definition is elusive.” He moreover discusses the various governing, governance and allegiance roles political leaders play and the devices by which their ability to lead effectively can be improved.

One such device is a sustained open contact and discussion among party members and more importantly with political society as a whole. Irrespective of the legitimacy of the authority vested in the leaders, party members and society at large need to practice a system of checks and balances on the workings and convictions of these political leaders and the parties themselves.

On a number of occasions, I tried to discuss the mechanisms for a sustainable intra-party democracy and deliberation beyond aggregation that in turn is limited to just voting when appointing officials and endorsing policy proposals. The statute today reconfirms such mechanisms and mandates the active participation and contribution of all party representatives ranging from party organs to party branches and district and regional groups.

To what extent does such mandatory deep, intelligent and objective discussion take place during an Executive Committee meeting? The media only reports the pronouncements and acclamations of the party “literati”. Is it possible that these “literati” in a representative role would be speaking for the remaining committee crowd who could only be mumbling words following the positions and directions of their protectors?

A bottom-up deliberative approach nurtured by almost all party representatives would not result from home visits, from festas, visiting shops or from enjoying a round of pastizzi. This social aspect is relevant, but in no way does it convey the thinking of specific interest groups empowered to discuss issues internally in groups they form part of.

The possibility for discussion and debate could make intra-party democracy meaningful by empowering members. These groups can engage in reasoned arguments with the elite, challenge the status quo and understand or devise policies. Prima facie the revised Statute provides for such a scenario. “(Such system) provides a mechanism for individuals to jointly define and sharpen their political views through a process of reciprocal exchange with each other, out of which there can emerge a political platform they can all stand for.” (Invernizzi-Acetti & Wolkenstein, 2017)

In Malta, rule of law is on everyone’s lips. No one shall contravene the law of the land premeditatedly or through circumstantial assumed unlearned opinions. The same applies to a political party.

The house is on fire and we immerse ourselves in discussing the characteristics of the fire but not measures how a fire would not again wreak havoc on our home. Often, Malta is characteristically renowned for experimenting with half-measures. The revised Statute, that in the circumstances is an impeccable exploit with all inputting their intelligent and erratic positions, is a case in point. Distancing the party from the notion of submissiveness entails a system of checks and balances that acts as a leverage.

Power should not be the agenda for the coming Executive Committee meeting. If the power issue needs to eventually be put to the vote of the tesserati, one would need to bear in mind the thinking of those thousands that ended up members of a conformist silent crowd that express deep reservations on the tesserati register and the machinations that are said to have been practiced in the not too distant past.

Prior to going to a vote of non-confidence and subsequently to a vote for leadership, if so is the case, it needs to be ascertained that such campaigns (intra-party or among the party members) afford a level playing field. The party Secretary General now responsible for communication needs to ascertain that the party media projects the thinking of both factions and eliminates all forms of censorships.

The starting point of today’s Executive Committee meeting shall not be what distinguishes one faction from another (that is known, evident and justified) but should be the formulation of a discourse on the imperative need of sustaining a heterogeneous group of actors believing in a future for the party through converging parallels. In order for such discussion to take place the Executive Committee would this evening require a respected political actor who with a notary-figure approach would mediate between these ‘warring’ factions.

Committee members, even if considered as enlightened are called to exercise caution, restrain anger and quasi-judgemental statements. Reasonableness rather than emotions should characterise the session.

Committee Members have to project their thinking in a spirit of realism and collegiality also with those who persist in their positions. They owe it to the party, the party members and more importantly to the whole political society.