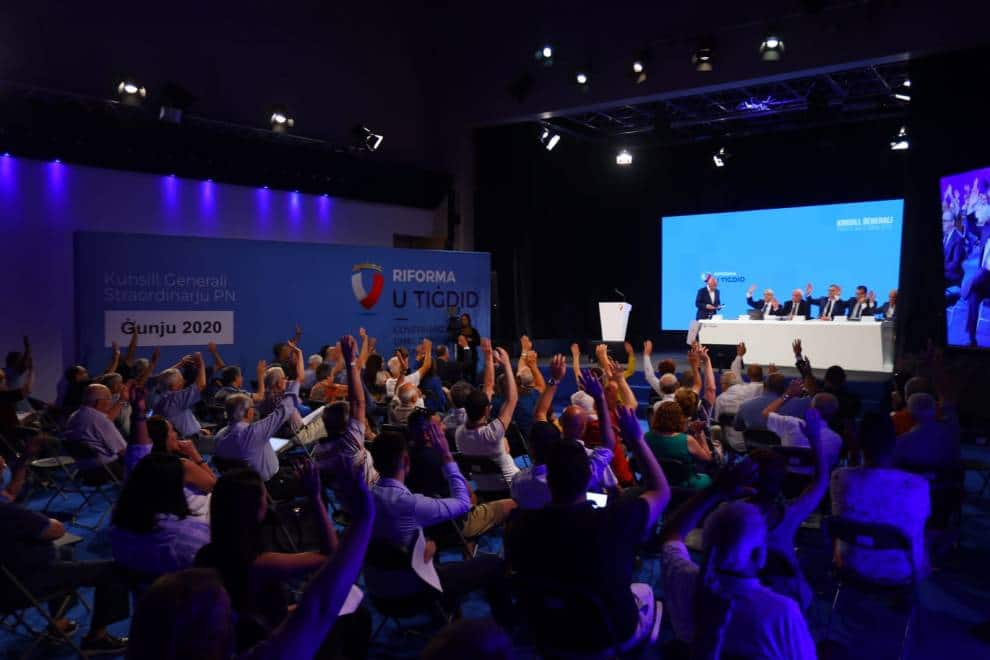 This is not an academic critique on the recently approved changes to the Partit Nazzjonalista statute; certainly not a reproachful exercise of an otherwise highly deliberate, researched and pragmatic political instrument focussing on party structure and rules of procedures. It is an attempt towards a dialogue on the relevance of faith in a post-modernist party.

Up to an extent the statute also endeavours to separate the “Extra-parliamentary Party Organisation” (EPO) from the Parliamentary Party Group (PPG). The party should have introduced a mechanism focussing on integrative party leadership with overlapping decision-making processes in connection with the party’s political programme.

More importantly Louis Galea did not restrain himself to a sort of dialogue meeting people in shops, festas or over a round of pastizzi. Instead he effectively puts into practice an intra-party deliberative approach that goes beyond aggregation.

European party statutes often would not contain any programmatic political prose. Political programmes delving in detail on identity, mission and political initiatives, referred to as “foundation programmes”, are held separate.

It need be pointed out that the Konrad Adenauer Stiftung report for 2018 on the state of Christian Democratic parties in Europe, no longer recognises the PN as a CD party.

Most party statutes in a preamble would refer to the party’s identity, delicately indicating its inspirational source/s that gives life to its mission of being of service to the ‘peoples’ based on ongoing ‘political renewal’ in an evolving socio-economic environment. Christian inspired parties, that were the founders of today’s European Union, still profess references to their drawing inspiration from cultural, religious, humanistic heritage. This holds good for the European Union Treaty of Lisbon where in a neutral context it places emphasis on the valid contribution of religions without ever referring to laïcité or secularity.

This is not the case with today’s statute of the Partit Nazzjonalista. Certainly not without reasoned justification in consideration of a local abstract “revolutionary” political thought centring on induced mass capitalism and consumerism and the smouldering notions of extant diverse levels of secularism that may have also permeated the party itself.

The concluding statement by one speaker, reading a prepared text, that the party is ‘lay and secular’ (stating the obvious) could have shed an unintended different dimension to the conspicuous absence of references to ‘faith’ in the statute approved text.

It is a case seeking comfort in Paul’s to the Corinthians narrative of a ‘positive law’ command “… seeing through a glass, darkly…” Ingmar Bergman’s trilogy of faith in the early sixties speaks volumes.

I discussed at length with individuals, members of what I describe a conformist “vast silent crowd”, who themselves raised the issue; but more importantly with the prime-mover of the drafting of the Statute, who Jan-Werner Müller would describe as an “in-between-figure” – a knowledgeable and enlightening person in this case assisting a political party.

Also, recalling Jean-Dominique Durand “There is not a single Christian Democratic ideology or movement… the formula covers a wide variety of internal differences, stemming from religious, philosophical, but also historical, sociological and electoral factors.” and also in the spirit of Christian Democratic tenet that what unites all practitioners of this ideology is to find practical ways of reconciling Christianity and modern democracy, I shall briefly put forward a contrasting yet mediatory position.

Apparently, justification for renouncing religious references lies on the premise that all the constituent values and all resulting prescribed collateral political action addressing the individual and his communities (Article 2 of Statute) emanate from the Christian gospels. But this cannot be otherwise, particularly so since Jacques Maritain’s teaching that there is a relationship between democracy and Christianity and Natural Law is all the more relevant in these post-modern democracies. Indeed, most parties today profess these same missions – and that includes local government.

Recent studies confirm that faith issues are becoming more relevant, impacting on electoral choices. A 2017 study by the London School of Economics affirmed the growing importance of faith in politics and views religion as complementary to liberal democracy rather in conflict with it. It is also reality that some politicians are making religious references as a magic word to manipulate public opinion.

The Papal encyclicals over the past century initially recognised the spite of workers resulting from an industrial society; later they recognised the need for Christians to involve themselves in politics. Catholic political formations soon distanced themselves from the churches. Post World War II it was religion, for a number of reasons, that brought together peoples and states.

Pope Francis, following the footsteps of his Jesuit colleague Carlo Maria Martini, asks Christians to involve themselves in politics with a capital and lower key – an act that Paul VI defines as the highest act of charity. Recently Francis stated he “…does not believe in a Catholic party. For that reason, Catholic politicians will join different parties and will work with people of other faiths in pursuing the common good.”

Francis, as before him Benedict XVI, recognises that in today’s realities serving in politics could be martyrdom. He encourages Christians particularly to persevere in their arduous mission, and when they err, they would ask forgiveness and move on. I recall a certain Prof Ballin, a Catholic in the Dutch Christian Democratic Appeal, who as Minister in a coalition government had to pilot the Bill authorising assisted death.

But what is most relevant in this present context is Francis’ address in July 2013: “Continue to overcome apathy, offering a Christian response to the social and political anxieties…” He is asking us to not interfere in others’ different faith, others who practice a confined secular approach to life, but to respect and collaborate. And yet he advises that we should present ourselves as Christians ‘offering a Christian response’.

Pope Francis has altogether changed the thinking of his predecessors; being a realist he at times distances himself from former “non-negotiable values” – that recall colonial “reserved matters”. This is the crux of the elective affinities between faith and politics. The choice of Francis is one aiming towards developing consciences, something that calls for longer times.

Professor Ernst Hirsh Ballin, introduces his paper (2013) ‘Christianity and the Future of Christian Democracy’ with this quote: “You are the salt of the earth. But if the salt loses its saltiness, how can it be made salty again?” – Matthew 5:13.

He goes on to describe how a foundation programme of a Christian-inspired party may express its relationship to the Gospel and the faith/churches as a dialogue that results in a political conviction. This programme would use expressions, as “respond to”, “interaction” and “search for meaning”… none of which suggest submission.

It is hoped that a reference to a dialogue with faith and the Gospels be affirmed on launching this otherwise impeccable achievement and is included in the programmes of the Partit Nazzjonalista. It is also hoped that the party, open to all – but not at all costs a “broad church” party – would include in its nomination of officials and election “candidates” selection criteria a weighting relating to the individual’s political conviction as described above. A sociologist reminds me that most people who do not vote PN indeed care about faith.