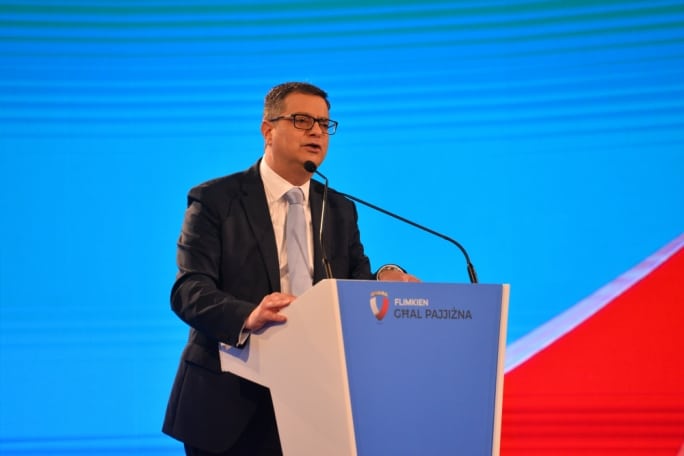 Adrian Delia is the archetype of the populist tyrant. It doesn’t matter to him that he doesn’t have the support of his Members of Parliament. It does not matter to him that you can’t have a leader of opposition if the opposition does not follow him. He will stick around claiming legitimacy from his party which is gripped by inertia and unable to make choices independently of the person occupying the post of party boss.

Remember what he did the last time he was in serious trouble. It was March of last year and the national subject was once again Adrian Delia. A year earlier the Financial Intelligence Analysis Unit, the FIAU, reported it found a reasonable suspicion of money laundering by Adrian Delia when in the early 2000s he represented Soho brothel keepers and handled money from them in a Jersey account in his name.

It was the same account he denied ever existed during his leadership campaign until Daphne Caruana Galizia published documentary evidence it existed.

In the year after that FIAU finding the police found that close to half a million euro were deposited in cheque and cash deposits over the period it was open. He was confronted with these facts in questions from The Sunday Times. Adrian Delia hit back. He hired a criminal law attorney, Joe Giglio, to represent him and went on the offensive with the police claiming the documents he was shown by The Sunday Times carried false signatures.

Kris Bajada had been in a coma for two months when this story raged. He woke up – you couldn’t make this up if you were pitching a story for the National Enquirer – and told Malta Today: “There is absolutely no doubt that Adrian was the one who opened that Barclays account and managed it. Adrian must have thought that I would take some secret to the grave with me… if he denied having set up that bank account, it is a lie. What he said about the falsified signature was a diversionary tactic to deviate the public’s attention from the true facts, perhaps because he wanted to save face with elections around the corner.”

But Adrian Delia had created enough confusion to get the desperados in the PN hoping their leader was not a crook, reasons to continue to believe it. As a cherry on the cake Kris Bajada was, conveniently for Adrian Delia, the former brother-in-law of Simon Busuttil. A police search at Simon Busuttil’s sister’s house was enough to allow Adrian Delia to portray himself as the victim of a frame-up.

Then he did that other thing which he does. He sent out the victim message of paranoia to his mindless supporters in the PN and implicitly urged them to go to the Dar Ċentrali and act as a lynch mob to scare MPs and Executive Committee members and prevent them from opposing him.

That’s what happened in March 2019 last time we heard he had been found to be reasonably suspected of money laundering and that the police were investigating him for it.

Remember the three steps in Adrian Delia’s survival manual then:

First, discredit the journalist. You will remember the biċċa blogger onslaught when the Soho scandal was first reported by Daphne Caruana Galizia. And then again by filing police reports about falsified signatures in response to questions from The Sunday Times.

Second, play the victim. Go to the police and tell them the evidence against you has been fabricated in a frame-up with innuendo on who might have done that so that attention is shifted on to them. It was Simon Busuttil last year.

Third, mobilise angry supporters. That’s happening this time already. Messages are going around the outer inner middle circle of the core PN support calling for their presence this afternoon outside party HQ to cheer on “il-maħbub kap tagħna”.

Previous:Impeach Peter Grech
Next:16 July: Vigil for Truth and Justice