The Nationalist Party is free to make its own choices of course. If the decision this weekend is to keep Adrian Delia on the path of confirmation, then that is its business. There’s a lot of the last-minute desperate campaigning going around reminding PN councillors why they should not give party members the opportunity to choose a new leader. Almost all of it is absurd. Some includes the risk that if there’s an election for a new leader people like Andrew Borg Cardona, Jason Azzopardi and Manuel Delia might like it. We can’t have that now, can we?

If Daphne Caruana Galizia were alive, they would be talking about her. They are certainly thinking of her.

There it is. The objects of hate identified by One TV, used by Adrian Delia to preserve himself.

This weekend’s ballot was brought about because of Adrian Delia’s illicit chit-chats with Yorgen Fenech after Yorgen Fenech was outed as a briber of politicians. That was the proverbial straw. Already piled on the camel’s back were Adrian Delia’s divisive methods, his attempt to dismiss his predecessor from the party, his onslaught on free journalism and his shady past that is the subject of ongoing criminal investigations.

They are calling all these facts lies concocted by an elite intent on removing him.

That word, elite, is being used a lot. Edwin Vassallo made it the topic of a speech in parliament naming only me, Manuel Delia, as the incorporation of that elite. What, pray, is that fucking supposed to mean? Am I a baronet now? How is it elitist to think that Edwin Vassallo is a twerp? It’s frankly a commonplace notion.

David Muscat used it. Just two days ago he was giving a speech at Norman Lowell’s birthday party. Because our Mosta priest thinks he’s doing God’s work encouraging young people to join a political party that sports a golden thunder bolt on a black field as its emblem, that is led by a holocaust denier and a Hitler apologist, and that considers the drowning of black people a heroic, national duty. David Muscat told his congregation of neo-Nazis bent on the violent destruction of the decadent bourgeois state that Manuel Delia “attacked him” for belonging to the “Destra Vera”, the true right. 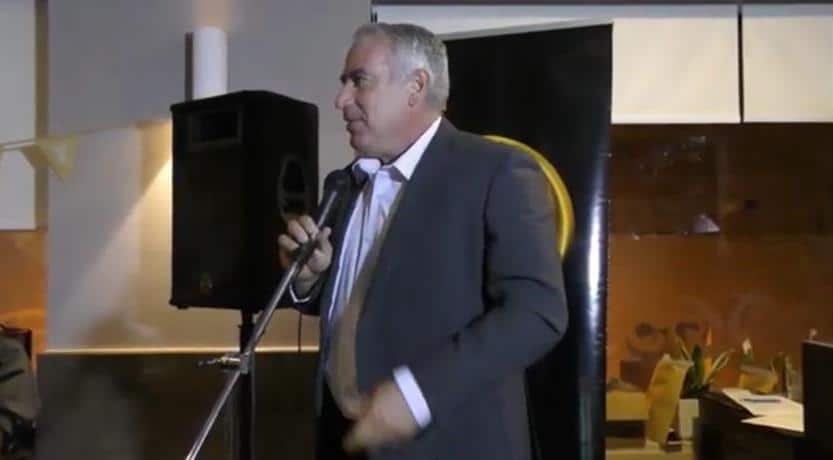 Simon Mercieca aimed higher than me, which let’s face it, is not that much of a challenge. He said today that he believes the move to remove Adrian Delia is backed and financed by George Soros and the real ace in the hole of the anti-Adrian Delia movement is Roberta Metsola with whom they wish to supplant him. Shock, horror, a woman in power, a notion a fascist can never digest. Simon Mercieca has gone full Breitbart, resorting to paranoia, hysteria and of course puerile invention. When everything else fails, blame it on a Jew. 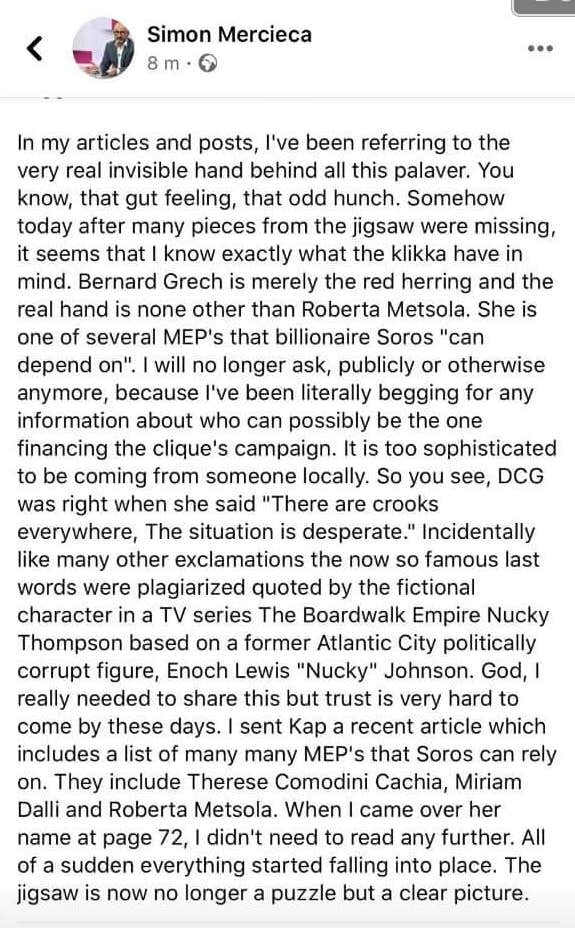 Later Simon Mercieca denied paternity of this madness saying he was only forwarding somebody else’s post. That’s like Donald Trump retweeting a post saying you can keep coronavirus away by drinking dog piss. If you share it and don’t deny it, you own it.

Carmelo Mifsud Bonnici sent out a simple message at a NET TV interview yesterday. His argument, summed up in a Facebook post, “everyone behind the chief”. 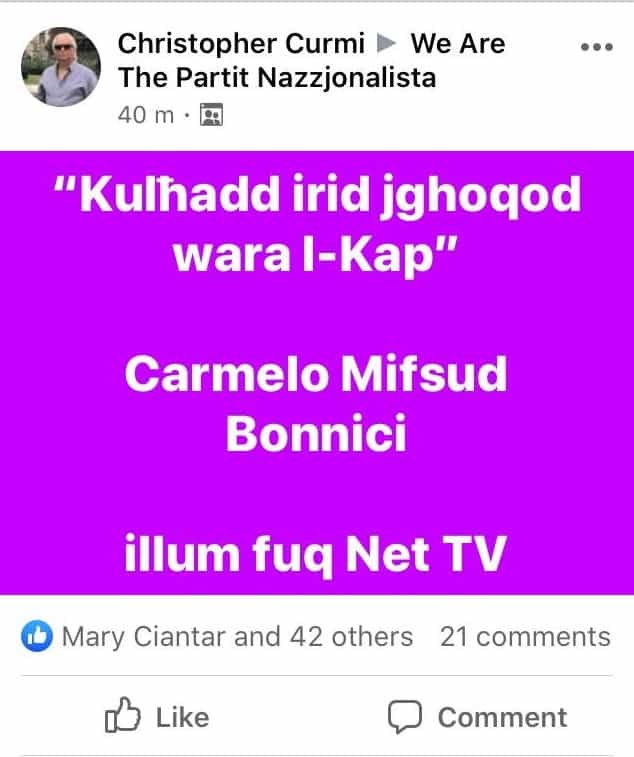 He could have us all recite an oath, left hand straight by our side, right hand stabbing the air:  I swear I will be faithful and obedient to the leader Adrian Delia, so help me God. I promise you, that sounds different if you heard it in the original German. Replace Adrian Delia with Adolf Hitler and you’ll remember what it means to turn party faithful into lemmings.

So help me God. Because of course all fascists claim God fights on their side. Fuck off, won’t you.

These may look like fringe loons. But they’re in the mainstream and they will stay there if Adrian Delia stays at the helm of the PN. For here’s the thing. Though Adrian Delia may not himself resort to bible-bashing southern-belt God-lives-in-me rhetoric like Edwin Vassallo does; and he may not be trying to keep a straight face while speaking about a worldwide Jewish conspiracy to supplant him like Simon Mercieca; and he may not accept birthday party invitations from Norman Lowell like David Muscat does; but he’s giving these people free rein over the Nationalist Party.

Instead of denouncing them, he’s riding on their support. And he’s forming the discourse of their rhetoric that anyone who is not in the crowd stabbing the air and shouting his name is made of a decadent Junker elite financed by the menacing Jew and sundry, scheming, degenerate foreigners and homosexuals.

The Nationalist Party can make its own choice but let it be absolutely clear for everyone, since it seems it wasn’t clear enough when Adrian Delia first ran for the post he occupies. I remember Daphne Caruana Galizia warning that Manuel Delia would never vote for a Nationalist Party with Adrian Delia at the helm. She knew that truth before I did.

But I would do more than not vote for it. It is as important for the future of this country for us to fight Labour and its corruption, as it will be to fight a resurgent fascism brought into the mainstream of our politics by Adrian Delia’s uniquely toxic cocktail of incompetence, ambivalence, greed and moral vacuity.

Fighting mafia infiltration in politics and fighting fascist infiltration in politics is one and the same thing. The Italian fascists crushed the mafia in their time because of all people they could never tolerate a state outside the state they controlled. But they also crushed personal freedoms, aspirations, rights, the dignity of all women and of the men who disagreed with them

Read Edwin Vassallo’s speech to parliament. Follow what Simon Mercieca is saying. Understand what Norman Lowell and his followers are preaching. They want to take away the rights of human beings. The right to life of migrants. The right of people, black or white, to make their own choices in life. The right to religious freedom, including the freedom of having no religion. The right to a justice and law that is greater than the narrowness of our borders but an openness to Europe and the rest of the world.

Their wide-eyed fantasies are lunatic and fetishist particularly because they are mostly about themselves cast as a ruling elite composed of mediocre men – it’s always men – telling us all how we should please the eyes of God.

These fanatics are not Christian-Democrats. Christian-Democrats are by definition anti-fascists, tolerant, inclusive, secular, compassionate. Christian-Democrats profess the universality of human dignity, the blind application of rights and laws irrespective of the race, gender, age and origin of the subject. Christian-Democrats are the Nationalist Party of Eddie Fenech Adami, Lawrence Gonzi and Simon Busuttil that these neo-Nazis speak of with such resentment and contempt they sound just as fitting spouting this drivel on One TV, as they are on its indistinguishable mirror, that other hotbed of far-right propaganda, Net TV.

Consider Edwin Vassallo’s tactics here. He’s an MP for Mosta as is Ivan Bartolo (not the IT guy) who quit Labour and switched to the PN during the EU referendum campaign. Word is being pushed around now that having betrayed the Labour Party in the early 2000’s, Ivan Bartolo’s support for the cause of replacing Adrian Delia is another betrayal. The argument goes that once a traitor, always a traitor.

If there’s anyone in active politics today that embodies the values of Christian Democracy, that’s Ivan Bartolo. His move away from the Labour Party was grounded in the Christian-Democrat cause of European integration and Malta’s participation in that grand scheme. And his politics is a form of structured and formalised charity. He’s barely interested in anything but improving the lot of the poor.

That’s while Edwin Vassallo, denim trousers, purple stole and a crucifix in one hand, and sweating holy water, speaks of treason and traitors like a jackbooted Sturmbannführer.

Politicians who profess mistrust of people who switched from the opposing party do not seek power by democratic means. They seek that fatal purity that only people happy to do away with democracy to achieve and retain power are capable of.

How long will it take Simon Mercieca to suggest we should be postponing elections? Elitism anyone?

Edwin Vassallo said I was Marxist, which should be enough apparently for his listeners to want to burn me at the stake. Marxists will be the first to disagree about his approximation of my political frame.

If Adrian Delia is still leader of the Nationalist Party on the third anniversary of his election it won’t really matter to me if I’m Marxist, Green, Socialist, Liberal, Conservative, Republican, Democrat, Communist or Centrist. And it especially won’t matter if I was ever Nationalist.

I know what I am. I’m anti-fascist. And if that’s elitist, so be it.

Previous:Smorgasbord of insanity (8)
Next:GUEST VERSES (in Maltese): The Woman Who Had Enough