A group of seven professionals working in myriad capacities within the literary and journalistic fields in Malta is inviting writers, editors, journalists, bloggers, publishers, academics, artists, and activists to a public meeting being held online on Zoom on Saturday 13 March 2021 from 10:00 onwards. The meeting will be the first of two intended to create a dialogue and formalise the application with writers interested in becoming founding members of the very first PEN Centre in the Maltese Islands.

Founded a century ago in London by Catherine Amy Dawson Scott, with Nobel Prize-winning author John Galsworthy as its first President, PEN International is a global association of writers promoting literature and freedom of expression, and currently has more than 150 centres worldwide. The core group of promoters for aspiring PEN Malta recognises the significance of instituting a national PEN Centre at a time when the unified voice and forces of the literary and journalistic communities can play a crucial role in furthering PEN’s mission at the local level.

International Secretary and Estonian writer, Kätlin Kaldmaa, will be headlining the discussion and elaborating further on PEN’s purpose. The core group of promoters will also be addressing the audience and tracing the arc of development achieved so far, in addition to laying out the next steps for the creation of the Centre.

Anyone interested in becoming a founding member of PEN Malta can email [email protected] to register for the meeting. More information about the process of establishing PEN Malta will be shared during the event, and there will also be the opportunity to ask questions directly to the panel. For more updates on this project, follow us on Facebook (@PENMalta), Twitter (@MaltaPEN), and Instagram (@pen_malta). 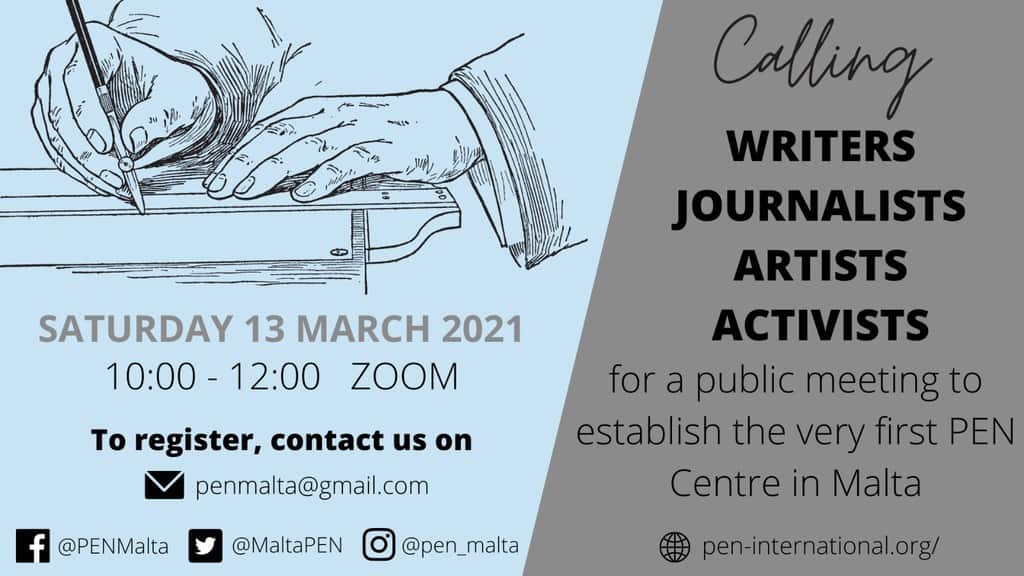 Previous:Government in legal bid to ban Repubblika
Next:National unity on their terms