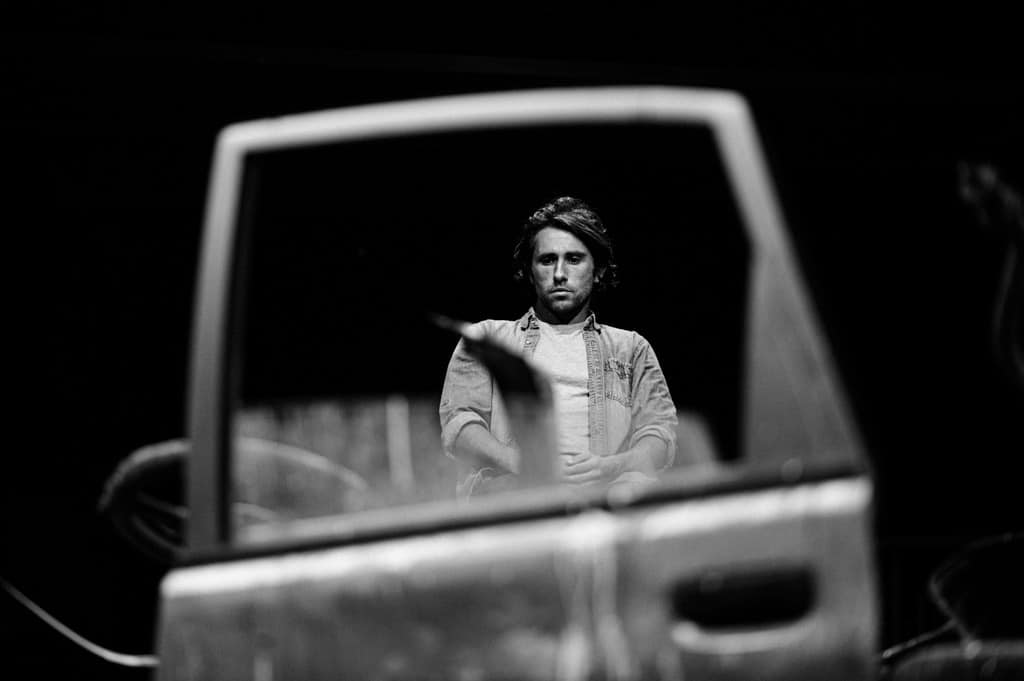 Herman Grech’s play They Blew Her Up is about the killing of Daphne Caruana Galizia. It’s playing at the upstairs square theatre of St James Cavalier and seating was spread out for social distancing making it an up close, silent, emotional affair. The grim set orbited a jumble of metal in the middle of the room, the remains of the car Daphne was killed in. You’d sit so close to it you could feel the theatrical fire singeing the skin off your face.

Actors took turns to step out on stage and recite a series of monologues. This was a chain of soliloquies and if you’re even vaguely familiar with the story of how Daphne was killed and the process of discovering why, quite a few of the lines will be already familiar to you like the Shakespeare play you remember dimly but inescapably from school times.

At first I wondered if a string of short one-person plays amounted to a washing line for a single cohesive performance. The speeches were disjointed. The thoughts and the emotions the characters expressed stood alone like bubbles, untouched and unaffected by the other speeches that would be recited in their absence.

Bubbles. It made me think of covid, never far from the atmosphere in the place. More empty seats in this theatre than occupied ones and yet, in today’s world the whole setting was uncomfortably crowded.

Bubbles. A villain imagining Daphne’s death rationalised her elimination. I felt the actor (Alan Paris) look into my eyes as if he was channelling his anger at Daphne through me. I squirmed uncomfortably as he complained about a conversation he had with his son who had discovered Daphne had written he was terminally ill.

Another character (Kim Dalli), incorporating a series of journalists I felt I know and probably do, also made me shift in my seat as she articulated the professional envy of journalists who saw Daphne beat them to stories and run amok with her acid wit exceeding limits any editor would impose on them.

As I sat through those monologues, my furious responses bubbling inside my head, I saw the dramatic sense in having all other actors wait outside as each one of them spoke their lines to the air. The device honestly reflects how this country has had its conversation about Daphne before she drove down her road in Bidnija and in the heat of the fire that consumed her.

We have monologues, unheard by those who feel differently. They are processes of rationalisation constructed to allow us to live with the injustice and the incomprehension of what came to pass. I speak and speak and speak. But only people who expect to agree with me are listening.

There in the killers’ head (Alan Paris played all of them and none) is some ethical construct in which killing Daphne Caruana Galizia was a good thing.

And in the other voices of the play, the impossibly dapper policeman (Jes Camilleri, as far from the stereotypical Malta squad man as any actor could possibly be) and the vague figure of authority (Charlotte Grech), there are constructs that justify delays in pursuing justice and the unsavoury compromises as invisible restraints they prefer to deny exist hold them back.

As they speak their mind to no one but themselves – villain, witness, hunter – no one is there to listen. Mutual suspicion keeps everyone apart, alone, unable to teach others, unwilling to learn from them.

And then, there’s Daphne’s son (Joe Azzopardi) also speaking mostly alone, rehearsing in his head the interviews he would give, heard by many, listened to by too few. The best lines of the play are for him. That’s only partly due to the playwright’s obvious bias and sympathy for a young man who saw his mother in flames. It’s also because the underlying device of the play is to hand to the characters the script written for them in the real world, from interviews, off the record conversations, and recordings of villains captured by hidden phones.

The actor who plays, mostly, Matthew Caruana Galizia, with dustings of his brothers and the rest of his family, has a Sorkinite script, sparkling, viciously honest, bereft of rhetorical subtleties, burning not so much with poetic intensity as much as the fierce sharpness of a witness with the extraordinary capability of putting in words what they have seen, heard and felt. The script for Joe Azzopardi was written by Matthew Caruana Galizia.

And again, the discomfort of being dragged into the heat, being forced to face the fire, the flames stretching out of the burning car as much as the hate spewed by thousands who were never in the room when his mother was speaking and who are never in the room now as he speaks.

The room where he speaks. It is significant that the play was performed at a State-owned and State-run theatre, metres away from some of the largest civil society protests ever witnessed in this country, all provoked by the events retold in Herman Grech’s play. Protests outside. Silence inside. But the playwright forced the insides of an impervious stone fortress of the State to listen.

At one point I have a Stan Lee cameo as I’m heard on the speakers inside the theatre, roaring at a microphone outside it in the square. Since my face had been throughout the play in and out of the looking glass anyway, hearing my own voice was just another layer of familiar discomfort. Because, in the shadow of Bidnija, there’s no theatre, no artistic license, no room for imagination to fill in gaps. Herman Grech here is a journalist first, a playwright second.

They Blew Her Up is playing at the Spazju Kreattiv theatre until 14 March.

Previous:Robert Abela, a little reading before bed could help with the pressure
Next:Government in legal bid to ban Repubblika