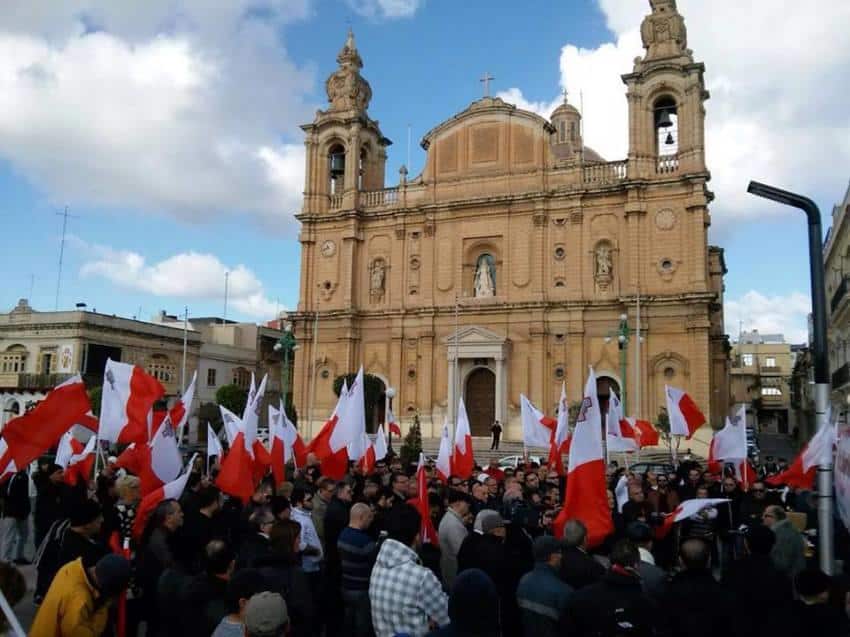 Size, history, ethnic makeup, relative religious homogeneity, peripherality, maritime and front-line geographical location: all these are possible causes, ingredients in the mirky soup of our particular brand of nationalism.

If the causes are debatable, the manifestation of nationalism in this country should be beyond doubt. The fact that we don’t think about it too much, that it doesn’t bother us most of the time, that it’s practically taboo to distance oneself from it, is, as I see it, all the more reason to discuss it.

Almost 90% of respondents to the recent state of the nation survey said they wouldn’t rather have been born anywhere else. It’s risky to read too much into that. If asked the question, without context, I’m quite sure I wouldn’t be able to think of anywhere else I’d much rather have been born. That’s not because I think of Malta as necessarily the best place in the world. It’s more because I can think of plenty worse, and wherever there’s better is not immune from the sufferings of the human condition. Faced by a genie in a bottle question as the survey question seemed to be, I too take comfort in my lot.

Rather than the survey question, it is probably more useful to refer to the way the prime minister recently spoke about his ambition to make Malta “the best country in the world” within the next 10 years. I’ve written about the practical impossibility of reaching any meaningful approximation of that claim. I’ve written about how absurdly hyperbolic the statement is, as partisan slogans go.

But consider now, one further point: the public’s reaction to the claim. Although I heard a few chuckles, those tended to reflect scepticism about Robert Abela’s ability to reach his lofty (and hopelessly vague) hopes. Perhaps things will change when he actually wins an election, but up till now the man doesn’t have many admirers. He’s mostly his own biggest fan. The statement ‘I will make Malta the best country in the world’ is immediately perceived as banal exaggeration because few people think Robert Abela can make Malta the best it’s ever been let alone better than anyone else in the world.

Robert Abela’s ability to conjure miracles is secondary. A deeper absurdity in the claim is that somehow the Maltese are a chosen people destined for such greatness that it would be the envy of the rest of the world.

This article will be completely free of commonplace disclaimers like “I love my country, but” or “I am proud to be Maltese, but”. The fact that we habitually feel we need to make that known before proceeding to criticise something about ourselves frankly confirms the attitude that the point of departure of any reflection about ourselves must rest on the assumption that to begin with we are great.

In the confoundingly enigmatic, but satisfyingly accurate words spoken by the burning bush, we are who we are.

It’s not what we are that I am discussing. It’s what we think we are and how we perceive ourselves. And then, more to the point, how this underlying perception of ourselves penetrates our politics, is exploited by our elites, and clouds our ability to make the right judgement.

Nationalism is the ideological basis for sovereignty. Recognising ourselves as a distinct nation justifies the existence of our State and our independence as a country. Fair enough. But there’s a point where the self-referential and self-indulgent recognition of ourselves is no longer a practical or desirable basis for policy. It’s one thing to think “We are Maltese, therefore Malta should belong to us”. It’s another to say that “We are Maltese, therefore anyone who isn’t must enjoy lesser rights here”. And yet, there it is.

The fact is that the ultimate assertion of sovereignty is in the act of exercising it with restraint. Our most sovereign act after independence was not the brinkmanship of Dom Mintoff but the act of renouncing some of that sovereignty and sharing it with others when we joined the EU. Did we then understand the limits of desirability of flexing our sovereignty just because we could? Hardly. When we’re not showing off the money we got out of the EU, we usually speak about the European Union in terms of resisting its encroachment on our sovereignty.

This comes through very clearly in the passports-selling debate. Though our policy of selling passports to people completely unconnected to our country impinges on the interests of other EU member states we insist the EU should not interfere in our discretion on whom to recognise as citizens. 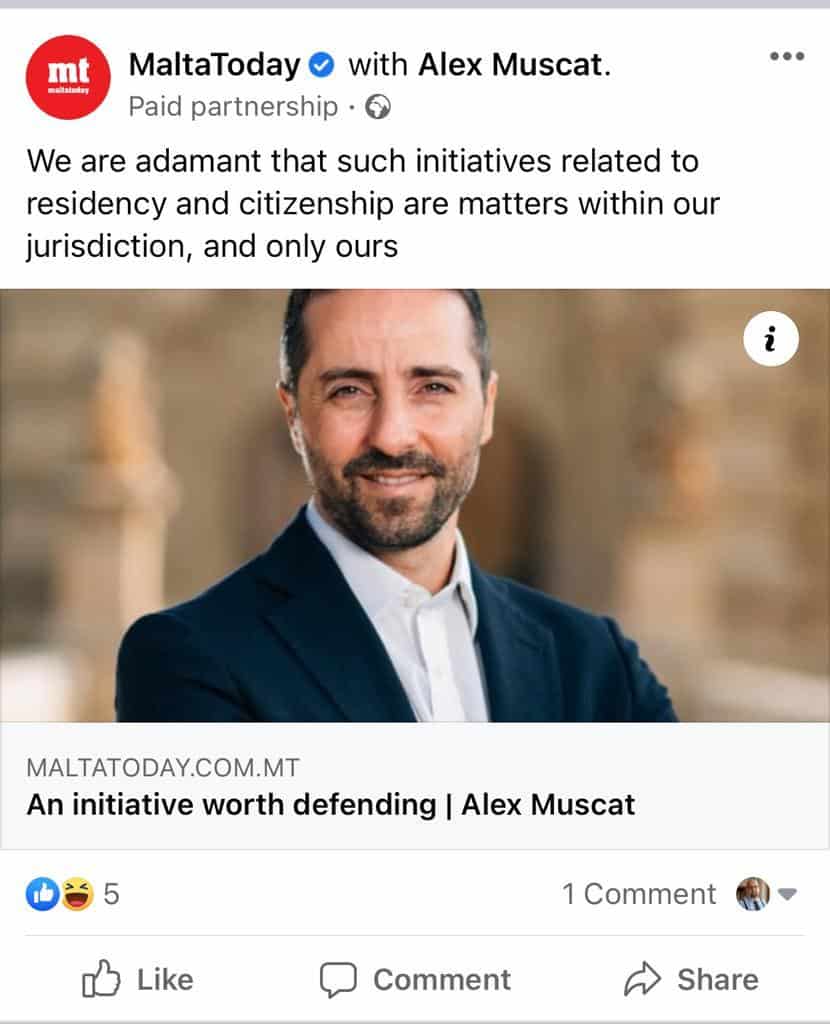 Perceive the shift in people’s thinking. They may have misgivings, if they choose to care, about the passport-selling scheme. Things are less vague on the question as to whether there can be a compromise on our sovereign right to choose to do the wrong thing.

Another example: hunting and trapping in breach of international conservation conventions. The rights and the wrongs of doing it are fairly debatable. But the fall-back defence is an argument of ‘patriotism’. Defenders of the practice speak of ‘tradition’, ‘local context’ and when all else fails ‘sovereignty’.

All else rarely fails. But it happened grotesquely for the government in the aftermath of the killing of Daphne Caruana Galizia. The Council of Europe appointed a rapporteur to investigate what was happening in the country. The European Parliament dispatched missions, held debates and took votes. The authorities in Malta had very little argument in response.

They resorted instead to appeals to the inner patriot in all of us. This was foreign interference in our sovereign affairs. And like collaborators with foreign occupiers, the locals who co-operated with these outsiders were Ġakbini, traitors who betrayed the solidarity expected of children of the motherland.

It’s significant that the Maltese word for traitor is partisan and an identification of political opinion with collaboration with the enemy. Ġakbin is a corruption of Jacobin, a reference to the radical French revolutionary party that by the time the French occupied Malta in 1798 had all but melted away or lost their heads on the guillotine. Sympathising with revolutionary ideals in the Maltese context became equivalent to an association with an occupying outside force. It is incredible that political turmoil that in Malta lasted a handful of years more than two centuries ago still gives the name to people whose ideological attitudes bring them closer to “foreign opinion” than to the shared sense of entitlement of “Maltese patriots”.

I am going beyond the One TV slander and the Facebook trolling that brands people traitors. Consider service providers here in Malta who are starting to feel the pinch of dried-up enquiries for financial services in Malta. They will not call Roberta Metsola and David Casa “traitors” and openly imagine their public lynching on their Facebook accounts. But in private conversation, the service providers find it easy to blame the messengers for their business drought.

It takes a special sort of misguided patriotism to imagine that our financial services business should be immune from any consequence after the scandals that rocked Malta in the last 8 years. Self-confidence that imagines that financial services customers would not think twice before pumping their money through a country that had attracted the attention of the world when a journalist investigating financial crime was blown up and the government sought to frustrate the process of justice, is unhealthy and unrealistic.

It makes the classic mistake of nationalism, taking the mild claims of entitlement that come with self-awareness as a nation, to unrealistic propositions that will land you into trouble. Of course, this is Malta in 2021 not Italy in 1922 or Germany in 1933. We are not likely to mobilise armies and invade Ethiopia or Czechoslovakia. But we don’t think hard enough about what sort of trouble our sense of entitlement can land us in.

Right now, we are playing the dangerous game of claiming entitlement to impunity for financial crime. We expect to face no consequence for what we’ve allowed to happen over the past years. On the eve of the 2017 elections, service providers were warned that confirming the Labour Party in power would have direct consequence on the viability of their business. But none of them wanted the party to stop. No one wanted to stop raping the golden-egg laying goose. It was too much fun. They preferred to ignore the warning signs then, and now they fully expect the party to go on anyway, as some form of right.

The world, we think, owes us a living. Because we’re the best in the world.

There was a bit of that when we – some of us, anyway – had an unrealistic expectation that oil tankers would continue to flock to Malta to be repaired in our drydocks when anywhere from Norway to Vietnam would be cheaper. We comforted ourselves in patriotic delusion. Malta had centuries of ship-repair tradition, we said. Our dry docks where the biggest in the world, we whined. You couldn’t beat how pretty our Grand Harbour is, we stomped. But no matter what we told ourselves, the world and its economy sailed past us, oil tankers and all. 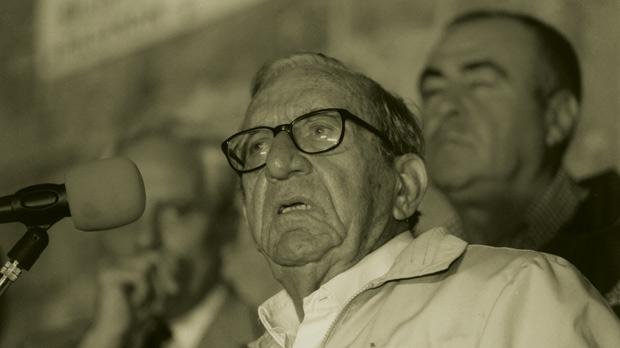 That is the sort of damage that our misguided patriotism can cause. We don’t invade neighbours. We mostly harm ourselves as our chest-beating is ignored by others.

That is not entirely true. Our misguided patriotism and sense of entitlement is also what sweetens policies of racial discrimination and the neglect of our search and rescue duties at sea, which even on the international stage we present as our sovereign entitlement.

Consider another recent example. I will not examine the merits of the vote on a common foreign and security policy taken recently in the European Parliament. Nor will I examine whether Cyrus Engerer and Alex Agius Saliba consciously broke ranks with Malta’s traditional foreign policy of preserving its veto rights wherever they exist. The Labour Party, the government and the MEPs themselves have not properly explained what they intended by the vote and the working theory that Engerer and Saliba had no idea what they were voting for at the time seems plausible given who it is we’re speaking about.

I will, instead, examine the policy of defending the veto power like our existence as a nation depends on it and how it is practically considered as self-evident that we should seek to preserve it at all costs.

The likelihood that we might actually take a foreign and security policy decision which is inconsistent with the view held by the majority of European Partners should be slim. Unless our self-importance grows so much that we think we should indeed invade Ethiopia or Czechoslovakia.

And it is desirable for us to be part of an effective EU on the world stage with a foreign policy that is not blocked by some cowboy like Victor Orban who owes too many favours to Vladimir Putin.

But we want to retain the veto to use it as a bargaining chip on unrelated matters: migration was mentioned. That’s the sovereign right of blocking a common foreign and security policy we agree with (as likely we would) to impose ourselves on unrelated matters, perhaps even our perceived right of breaching international and humanitarian laws.

If it was so important for us to retain the right to unilaterally block any impact on ourselves of decisions taken unanimously by all our European partners, we may as well have stayed outside the EU. We forget the sovereign act of sharing our sovereignty with others and recall instead with nostalgia our ability to behave like Dom Mintoff and attract the world’s attention for being an annoying nuisance rather than a constructive partner.

Wrapping oneself in the flag. It’s not as harmless as it sounds.