It’s hard to imagine reacting to the FATF grey-listing development in a worse manner than ignoring it or underestimating it. And yet, presumably because of the experience of Malta’s conduct since the yellow card was raised in 2019, that is exactly what the FATF expects us to do.

The concern was there, uncouched, in the FATF’s president’s remarks at the post-decision press conference. The Maltese authorities “must not downplay the importance of these measures,” the FATF boss said.

Sure enough, the Maltese authorities did. Immediately.

The reaction “unjust” necessarily implies that we do not think Malta is out of order. If we accept that we are out of order, that we have a problem that needs fixing, we would not be saying we’re being treated unjustly. We would be saying we’re getting exactly what we deserve and will now proceed to make amends.

The government clearly sets out its view that if an injustice has been made with Malta, their job now is to reverse that injustice. If you have been punished unfairly you do not fix the situation by accepting that you have done wrong when you know you haven’t. You try instead to persuade those who are punishing you unfairly that they are the ones who are wrong and you are right.

I can hear them all groan.

Second wrong response: “Other countries are just as bad”

This appeal to hypocrisy argument is fundamentally fallacious because it is hypocritical in and of itself. The Germans are being reminded of the Deutsche Bank scandal for example in some form of attempt to suggest that “they’re not ones to talk”. The German police raided Deutsche Bank HQ and acted on the findings. Meanwhile in the USA, Deutsche Bank was forced into a deferred prosecution agreement paying 9 figure penalties.

The issue of the FATF is not that corruption was caught in Malta. It’s what we did about it when we found out. Even as the Americans arrested Ali Sadr Hashemi Nejad, Edward Scicluna stood in Parliament to defend Pilatus Bank.

And the argument that “we’ve made a lot of progress” in the last years just doesn’t cut it.

It’s not just about the Panama Papers. No one has been charged with money laundering in connection with Pilatus Bank. The prosecution against John Dalli’s daughters over the Christian charity imbroglio will almost certainly fall through. The case against Keith Schembri’s accomplices does not give rise to optimism either. The Egrant inquiry cost more than is spent on schools and it still has not determined who owned the bloody thing. Billions went through Malta in the pre-legal days of the block-chain island but prosecutions of grocers cashing social security checks to the starving are prioritized. And then there’s the Panama Papers.

Third wrong response: “Grey-listing happens all the time. So it doesn’t matter.”

This is not failing your English lit and having to wait for a summer resit.

Consider this article on the Labour Party’s new English language website. It proposes to bust myths about the FATF grey list suggesting that being placed on the grey list is an ordinary, everyday occurrence. It tries to depart from comparisons with Yemen, Uganda, and Zimbabwe by pointing at the ordinariness of other countries that have been placed on the grey list in the past.

One, they say, is Greece. This is the country that was prevented from crushing out of the eurozone by the political will and generosity of the richer states that bailed the country out, particularly Germany. The Greeks are still paying the price of reconstruction and part of that price was a complete overhaul of the party-political system. There was nothing ‘normal’ about Greece’s experience. Ask ordinary Greeks.

The other examples the Labour Party’s website cites are utterly misleading. They refer to “Northern Cyprus” as if it was some province of Cyprus. Northern Cyprus is an occupied territory where Cypriot and European law does not apply. It is a toehold of Turkey and not knowing that betrays spectacular incompetence at the Labour Party’s website. They also refer to Hungary by they were under the FATF’s close scrutiny before the country joined the EU.

The attempt to de-dramatize the significance of Malta’s grey-listing is just what will keep us on that list.

Fourth wrong response: “These problems are older than Joseph Muscat.”

Alfred Sant made the argument today and on his factual premises, he was not wrong. It did not look good when Eddie Fenech Adami met a suspect in the case of the attempted murder of his assistant. Two judges had been charged and convicted of corruption, Nationalist Ministers were caught with stashes of money overseas, and a European Commissioner that had been nominated by Malta was fired for corruption.

Of course, that’s only half the story. The judges were indeed charged and convicted, which actually points to effective law enforcement, not the opposite. The Nationalist Ministers were given an amnesty by Joseph Muscat and John Dalli was ‘rehabilitated’ by Joseph Muscat who fired the police commissioner that wanted to prosecute John Dalli.

Alfred Sant is right that a culture of tolerance to corruption and wrongdoing is not new. I am reminded of one intervention he had made in his campaign to persuade people to vote for “Switzerland in the Mediterranean” instead of EU Membership. “Inbażwru naqra ‘l hawn u nbażwru naqra ‘l hinn,” he had said, telling his audience that Malta outside the EU would be able to cheat its way to economic success, rather than stick to rules of international and European law. 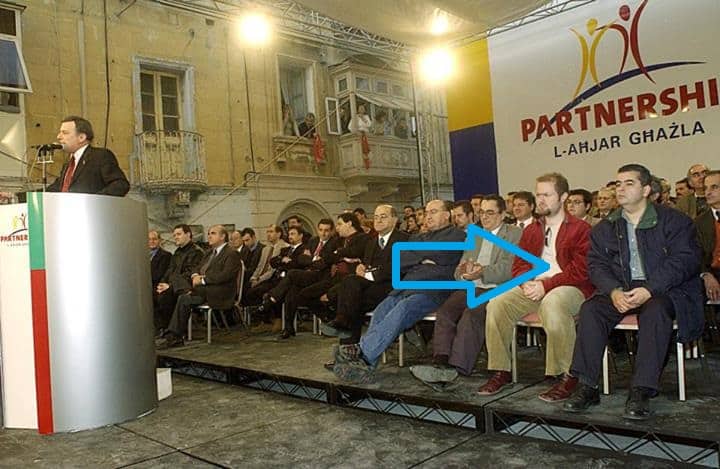 That indeed was the thrust of the “Switzerland in the Mediterranean” campaign. The idea was that in exchange for its aloofness, Switzerland was immune from international law and morality. They could get rich storing gold pulled from the teeth of Auschwitz victims, which is, of course, a vocation devoutly to be wished for.

That piratical philosophy is just what got us where we are. It is a culture that conflates sovereignty with a license for larceny on the high seas.

This is also the wrong response because by underestimating the role of Joseph Muscat in this mess, we fail to address the root of the problem. And I’m afraid, though we had warning symptoms of a culture that was prepared to elect Joseph Muscat, it is once our society elected and confirmed Joseph Muscat that a tendency for greed became national policy.

The discovery of Konrad Mizzi’s Panama companies is only marginally related to the discovery of Ninu Zammit’s Swiss accounts. Konrad Mizzi was absolved and protected by the government in office. Ministers speaking on our behalf to the world right now voted in Parliament to keep him in place. It is here and now that the police should be prosecuting him. It is here and now that nothing is happening about that.

Comparisons with the past may be educational but they only serve to confirm just how culturally adapt we are to live with corruption. Frankly, the historical accuracy of the search for seeds and causes in the misty past is immaterial, and that’s especially because people looking for ignored warning signs in the past do so to justify living with the mess today. Ninu Zammit’s Swiss accounts are no reason, except perhaps for Ninu Zammit himself, to confirm Joseph Muscat to office in 2017.

Anywhere else in the world the present situation would give us a political crisis. I say that not because I enjoy crises. It’s because if we continue to think our bad habits are not a problem, we’re not going to start the hard work of weaning ourselves off them.

“The sun will still rise even if we’re greylisted,” Edward Zammit Lewis said in a line now repeated like a quote from Siddhartha. This is the worst way to respond to this. The sun rose over Hiroshima the day after it was nuked. That didn’t mean Hiroshima was fine. It meant the rest of the universe was indifferent to its predicament.

What these false optimists should realise is what that phrase really means is that the rest of the world will go on largely unaffected if we persist in error and remain mistrusted and on a grey list.

We should be more ambitious than celebrating the fact the sun still rises. This is why we need to face up to the present situation as a crisis and deal with it as such.

When Italy first failed the criteria to be a founding member of the single currency, they set up emergency governments to get in line. Short-term technical governments with a large component of trusted experts under the scrutiny of parliament are a solution that the Italians have resorted to with some success in their worst of times. Consider Mario Monti and the present Mario Draghi government.

We need people running our show that unlike Robert Abela do not have reasons to cover up for Joseph Muscat or Konrad Mizzi.

And we need people speaking for us that the rest of the world can learn to trust again.

And we need to face up to the fact that for as long as we deny what is really happening to us, we are not going to begin to solve this.