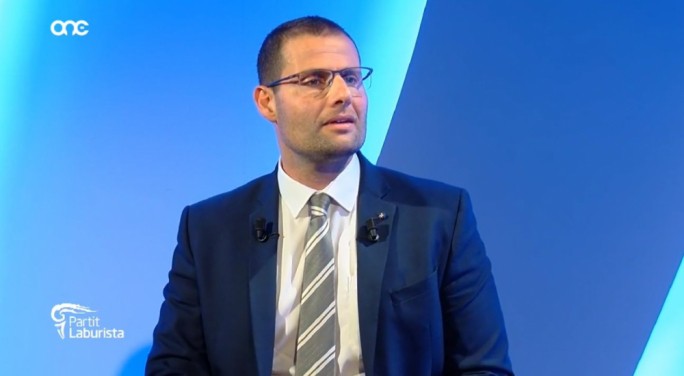 It’s not people who follow timesofmalta.com or read The Times of Malta in print in the morning who are likely to be impressed by some Anthony Degiovanni accusing Matthew Caruana Galizia of “contributing to his mother’s killing”. So, when an unidentified “spokesman from the OPM condemns” Anthony Degiovanni’s remarks to comments made exclusively to the Times, the audience that thinks Anthony Degiovanni is a bully for saying it will just not know “the OPM” disagrees.

We think that in the world of mass information that we live in it is impossible to miss a piece of news like that. That is a misunderstanding of the way our brain works. We do not absorb all that is around us. Nobody does. We’d go mad. No one has the capacity to allow themselves to perceive everything indiscriminately and then use that information without bias to draw conclusions. Our bias is an unconscious tool to prevent us from even perceiving information we don’t want to perceive.

It’s like our ability not to hear what the person next to us is telling us when we’re reading something on our phone.

And then “the spokesman from the OPM” wasn’t even trying. Because if he or she were trying to persuade the people likely to sympathise with Anthony Degiovanni that they’re wrong about this, they would know how to do it.

It should be clear that unlike what Lovin Malta reports second hand from Times of Malta’s report, Robert Abela decidedly did not condemn Anthony Degiovanni’s remarks. Times of Malta’s quotes are attributed to an unidentified spokesman. If Robert Abela wanted to condemn the remarks, he could have and would have. He’s not exactly camera shy. There are clear strategic reasons why Robert Abela did not do that.

The “condemnation” is put on the Times to deflate our resolve to push back on this sort of thing. There’s a protest tonight and they don’t like it. They want anyone who is likely to be displeased with Degiovanni’s remark to think of him as some loony lonesome wolf, that his views are just his own, and that refracting anger at what he’d said over the Labour Party or the government would be unjustified. They just want people not to protest or, if they’re still stubborn enough to do so, to look unreasonable doing it.

Consider that Anthony Degiovanni made those remarks to defend what Anġlu Farrugia had done: lie to Parliament’s Standard Committee and instead of doing what he committed to do (write a strong reprimand to Rosianne Cutajar) he got the Clerk to send her an anodyne memo.

Consider that what Anġlu Farrugia did was to cover up what Rosianne Cutajar had done: lie to Parliament by not declaring the gifts she got from and the relationship she had with Yorgen Fenech when she defended his interests on the floor of the House.

Consider that what Rosianne Cutajar did, whether she knew she was doing that or not, was to cover up what Yorgen Fenech is accused by the state’s prosecutors of having done: killing Daphne Caruana Galizia.

Consider that what Yorgen Fenech is accused of having done was to cover up the commitment his company 17 Black made to pay into Keith Schembri’s and Konrad Mizzi’s Panama companies fat bribes for public contracts.

So, please. This is not just about Anthony Degiovanni being a right royal cunt, though he is, and that is unbearable to even live with. The Labour Party and the Prime Minister have altogether other reasons not to get their supporters to hear of their distancing from the much preferable explanation for the killing of Daphne Caruana Galizia. They can’t have their supporters wonder about Schembri, Mizzi, Fenech, Cutajar, and Farrugia. They’d rather have their supporters think there’s a much simpler explanation for the killing of Daphne that Labour has nothing to do with: her son killed her. Simples.

And they do believe it. Here’s Gejtu Mercieca, a General Workers’ Union veteran, and another Labour Party stalwart cut from the same One TV cloth as Anthony Degiovanni. This was a comment in reaction to Lawrence Gonzi’s remarks that people should be going to tonight’s protest and make their voices heard. 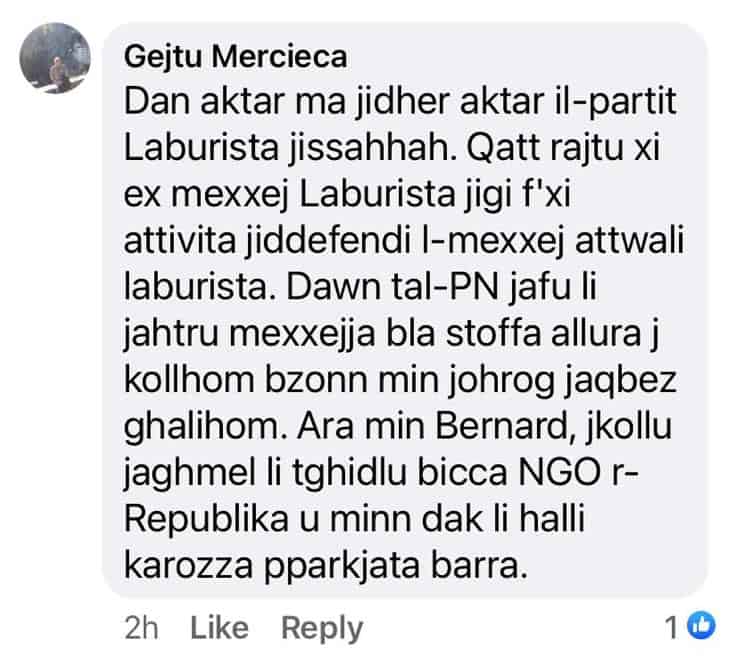 Is “the OPM” going to condemn these in replies from the Times on a one-by-one basis or would they rather just go on One TV and tell their people to stop this madness?

They won’t because what this is about is saying just enough in just the right places to get people not to protest.

Another GWU veteran, Tony Zarb is openly suggesting protests should be banned, because, you know, it’s Christmas week a month from now. Banned, as in made illegal. If Tony Zarb was at the Bloody Sunday 1905 workers’ march in St Petersburg he wouldn’t be among the labour leaders, he’d be on a horse slashing people with a sword.

Jason Micallef, on the other hand, would be in his silk dressing down, looking from behind the windows, complaining that these peasants and labourers and their poor taste in clothes are a cultural outrage.

I wonder why they worry. It’s not like One TV is going to report any of it after tonight. And if it didn’t happen on One TV, it didn’t really happen, did it?

Previous:GUEST POST: The age of the mediocre
Next:You know you’re not living in a democracy when …