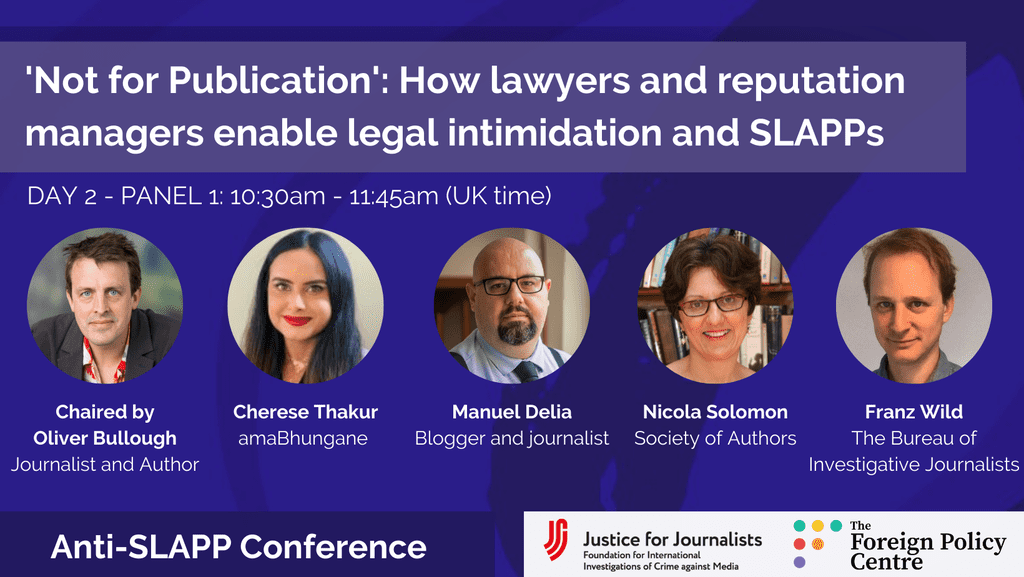 I was very happy to participate today on the second day of this important conference on SLAPP suits hosted in London by the Justice for Journalists Foundation and the Foreign Policy Centre. If you want to watch this morning’s session scroll to 10:30 on the time shown at the top right of the screen of this YouTube live video of today’s events. Scroll down for a transcript of my first intervention.

Thank you Justice for Journalists Foundation and thank you Foreign Policy Centre for this important and timely discussion.

I will share with you my personal experience of SLAPP suits, or at least a sample of them, to try to throw light on what happens when a self-publishing blogger working on their own must be prepared to face when covering stories of financial crime and the organisations that perpetrate it.

My name is Manuel Delia and most of my work is published on a near daily basis on my blog. It used to be something I did on the side but it became a full-time job the day a far better journalist was killed by a car bomb in Malta in October 2017. I resolved to help fill the void she left not by journalism of the same quality – that would have been impossible for a novice like me – but at least with commentary and noise.

Six months later I published a story about a bank operating in Malta that had only been set up 4 years earlier. I had solid information, doubly confirmed, that Maltese investigators had been tipped off about previous investigations by other agencies into the conduct of the owner of this banks. I published that report in April 2018.

I was called in by a firm of Maltese lawyers and told to retract the story and expunge it from the record or I would face a lawsuit in the UK where the same Bulgarian-born owner had other business. I had written in Malta about a Maltese bank operating in Malta but I was threatened with a lawsuit in the UK.

As I hesitated for a few days, I got a call from one of these lawyers. He may have meant this as a friendly aside but he told me his client was serious about filing in the UK and if he did I wouldn’t have to look for a defence team, I would better look for a cliff high enough to jump off.

I gave in. I had only been at this for 6 months and this bank was a side show in comparison with reporting about Daphne Caruana Galizia’s case. But just 6 months later Maltese regulators froze the bank’s activities. Thousands of people whose only money in the world was trapped inside the bank sufferred severe hardship for months before their money was released.

I wrote an apology on my blog to all those people. Had I had the courage to stick to my April story they could have been warned and banked elsewhere but I had lost my nerve and they sufferred as a result.

More than a year later, longer than the limit allowed by Maltese law, the bank’s owner sued me in Bulgaria. As evidence about the defamation he suffered he produced his girlfriend who said my piece worried her about her man. Presumably the fact that his bank was shut down and was fined €3 million for systemic anti-money laundering failures did not worry her quite so much.

The European Centre for Press and Media Freedom funded my defence but I lost the case and I have since appealed.

In May 2019, together with my co-authors John Sweeney and Carlo Bonini, I was wrapping up a book about Daphne Caruana Galizia’s murder and our Hercule-Poirot-like list of suspects of possible perpetrators. I sent summaries of our findings to the prime minister of the time, Joseph Muscat, his wife, his closest adviser, and two of his ministers, inviting them to send in their responses to be included in the publication.

They did not reply directly, hiring jointly instead the UK law-firm Carter Ruck who sent a flowery cease and desist. That letter ensured no publisher in the UK or elsewhere would touch our book. If you could write in a book that you suspected a prime minister in office of corruption which could be a motive for a murder, the publishers would ask, why are they still in office? How are they not arrested? Fair question except this was exactly why Daphne had been murdered.

Luckily enough we found a Maltese publisher mad enough to print the book and the Justice for Journalists Foundation who funded the project. A month later Joseph Muscat and his government collapsed. I am not claiming causility but the collapse of Joseph Muscat meant that a UK publisher was then happy to publish the book internationally. That’s the chilling and thawing effect in action.

While writing to Joseph Muscat et al, inviting them to send their comments, I also wrote to one Yorgen Fenech sending him direct questions that heavily implied suspicion of his involvement in the murder. I believe that was the first time, if not the only time, he was directly confronted by a journalist about the killing of Daphne Caruana Galizia.

He hired a local law firm to send in apoplectic warnings of hellfire should we consider to publish, which we proceeded to ignore. Three weeks after the publication of the book Yorgen Fenech was arrested charged with murder and he is still detained awaiting trial. Again I do not imply causality, but I rather suspect he does.

The noise from the local lawyers was just advance artillery. Much later I would learn Yorgen Fenech consulted ACK Law in the UK and drew up a strategy to silence journalists reporting on him, his business, his past, and his present. His lawyers identified me as an easy target, not backed by a corporate structure, and clearly unable to afford a defence. The lawyers advised Yorgen Fenech to use the UK courts to claim from me any risk of increased cost of borrowing from UK banks to his businesses. The plan was to send me a bill for over £70 million. That would have been my last coffee.

From prison he did not follow through. Instead he uses his local lawyers to harass me, file personalised court complaints that single me out, and recently a lawsuit claiming a denied right of reply. His lawyers are prepared to do all this and more for their client of apparently inexhaustible resources. They have been charged with attempting to bribe another journalist to secure good coverage for Yorgen Fenech.  They deny any wrongdoing.

One final remark on enabling lawyers. These firms enable the crooks paid from their huge pockets, some of which, we often rightly suspect, is made up of proceeds of crime. But lawyers also enable us. My experience is also of lawyers who work at no charge, reading my stuff to warn me against more obvious pitfalls, and defending me in court when the SLAPPs smack. They remind me that even in the anarchy that we live in, some light shines bright.

Previous:Her journey
Next:Government publishes regulation to give itself power to cover for its friends