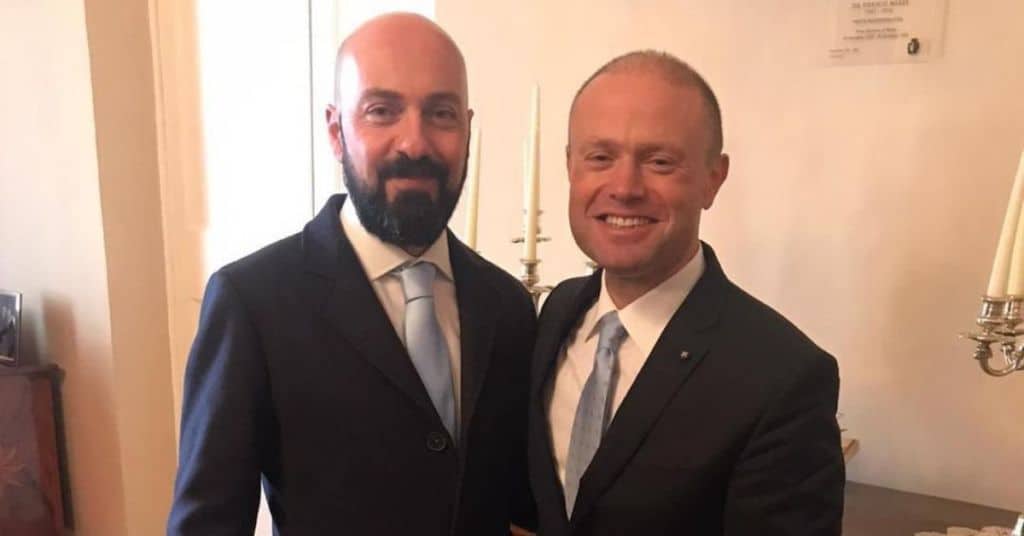 Former government official Neville Gafà who worked for Joseph Muscat and Robert Abela to push migrants back to Libya is named in a complaint filed with the International Criminal Court in The Hague and identified as a suspect for war crimes, this website can confirm.

Gafà and other Maltese government officials may face trial for warcrimes at the International Criminal Court if a complaint filed by an international network of lawyers about Malta’s work with the Libyan regime to push back migrants escaping Libya is successful.

Neville Gafà is specifically mentioned in connection with the Malta-Libya Memorandum signed with the Libyan authorities by Prime Minister Robert Abela. Gafà is also named for his role in Malta’s decision to reject migrants in Malta’s area of responsibility and the coordination of their push-back between the Maltese and Libyan authorities.

Lawyers filing the complaint in The Hague point out that when Malta entered into an agreement with Libya, it was already widely known that the Libyan militias were involved in human trafficking and that Libyan public officials exploited migrants to support militias. This chain of facts connects Malta’s push back of migrants with the war crimes committed by the Libyan militias.

Neville Gafà’s close relationship with alleged war criminals in Libya was first publicly exposed in 2018 when eye-witnesses reported seeing him in Tripoli meeting Haytham al-Tajouri, named by the UN for financial fraud and human rights infringements.

At the time Gafà worked on the staff of Prime Minister Joseph Muscat. Muscat at the time played down the meeting with al-Tajouri which Gafà claimed was brief and unplanned. Muscat insisted Gafà was doing “very good work” in Libya but was not specific about the nature of his work.

Gafà was also pictured meeting senior officials of the Libyan government and admitted to using Malta’s embassy resources for his visits. He was photographed being accompanied to meetings by Joseph Muscat’s personal bodyman Kenneth Camilleri.

Gafà was not confirmed in office when in January 2020 Robert Abela replaced Joseph Muscat. However, during the push back incidents in Easter 2020 Neville Gafà was hired again by Robert Abela to coordinate the operation with the Libyan authorities. That push back is the subject of a human rights case in Malta where the victims, represented by Paul Borg Olivier, claim their fundamental human rights were suppressed by Maltese authorities.

The information regarding the push back operation came from Gafà himself who claimed that he coordinated the push back from his Mellieħa home but acting “under Libyan jurisdiction”. In spite of his admission a Magisterial inquiry by Magistrate Joe Mifsud on a police complaint filed by Repubblika found the government had done no wrong.

The complaint to the International Criminal Court alleges otherwise.

The news of the complaint against Italian and Maltese officials is reported today by Italian journalist Nello Scavo writing on the Catholic newspaper Avvenire. Nello Scavo has been following closely events in Malta’s area of the Mediterranean where Italian and Maltese authorities are named for helping Libyan coastguard drag migrants to torture and inhuman conditions of captivity. Neville Gafà was acquitted by a Maltese court after Nello Scavo testified Gafà had threatened him in a public Twitter spat.

Scavo reports today that the complaint to the International Criminal Court is based on years of research in official documents, eyewitness accounts, audio recordings of communications at sea, films, ship charts, medical reports, forensic reports, diplomatic agreements, and judicial and journalistic inquiries.

Avvenire points out that this methodoloy has in the past led to the successful prosecution of the “executioners” or war criminals acting illegally in conflicts in the Balkans, in Rwanda, and in Cambodia.

The team of lawyers based in the Netherlands, France and Italy claim that “between 2017 and 2021, the Italian authorities provided the Libyan coast guard with crucial support  to intercept migrants at sea and bring them back to detention centers, including the supply of resources and equipment, maintenance of the same, and the training of the personnel involved.”

Maltese authorities have openly admitted participating in these efforts. The lawyers in fact accuse Maltese officials of acting “in a coordinated manner with the Libyan coast guard in the recovery of migrants to ensure that they were intercepted and returned to Libya.”

Legal NGOs UpRights, Adala for All and StraLi claim these actions by the Italian and Maltese authorities result in the torture of the pushed back migrants.

The International Criminal Court has instructions dating from March 2011 to investigate war crimes committed in Libya. The UN has subjected various militia leaders accused of crimes against human rights, trafficking in oil, weapons and human beings to sanctions. The jurists’ denunciation suggests that there is a direct connection between the conflict and war crimes against migrants.

The lawyers making the complaint claim this link qualifies the abuses as war crimes. Should the International Criminal Court agree with that claim, international arrest warrants would be issued against the named officials which, Avvenire points out, would cause serious embarrassments in Brussels, which supported and co-financed Malta’s initiatives.

The complaint claims “that the support provided by the Italian and Maltese authorities to the Libyan coast guard amounts to a form of complicity in the crimes committed against migrants , from which international criminal responsibility under the Statute of the Court derives”.

In June 2020, Prime Minister Robert Abela visited Libya to sign a Memorandum of Understanding between the two countries that outlines the help Maltese authorities give the Libyans to capture migrants at sea and pull them back to Libya. The MOU provides for a Maltese official based in Tripoli to help the Libyan authorities with this mission that lawyers in The Hague suggest amounts to a war-crime. Since the signing of the MOU the position remained vacant until it was filled last month by former prison director Alex Dalli. A government statement described the former army colonel as the “government’s special representative” in Libya.

Previous:More images from yesterday’s vigil
Next:Not bad for a traitor who hates Malta