My piece in today’s L’Espresso. English translation below. 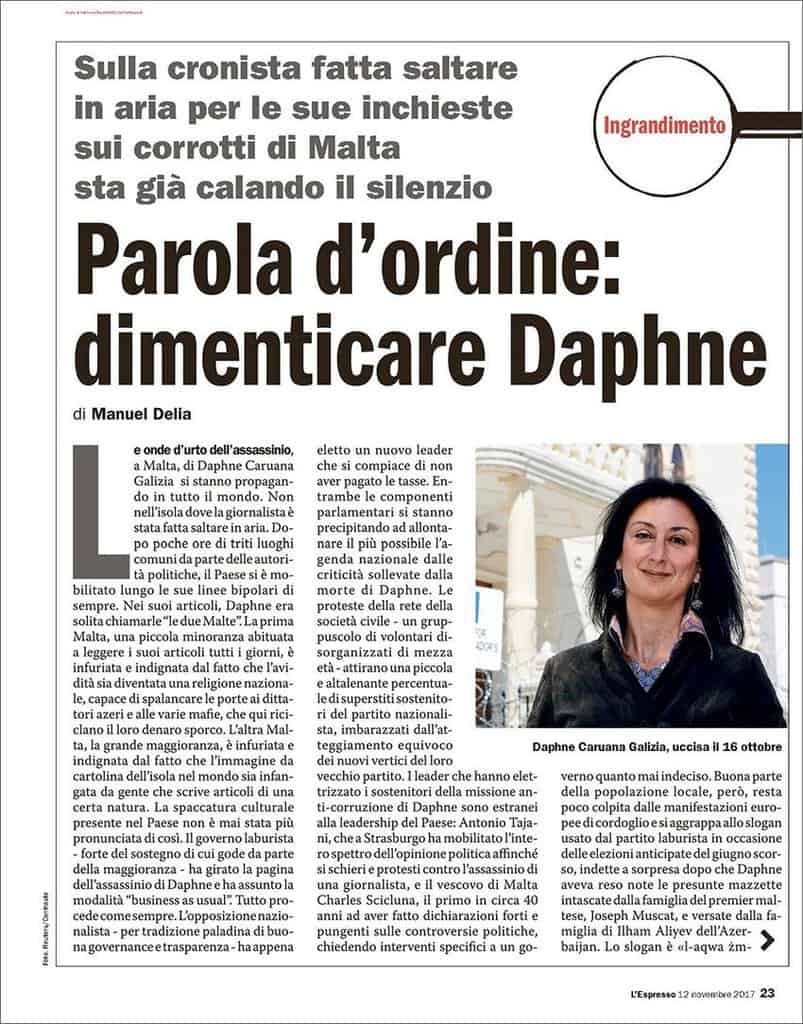 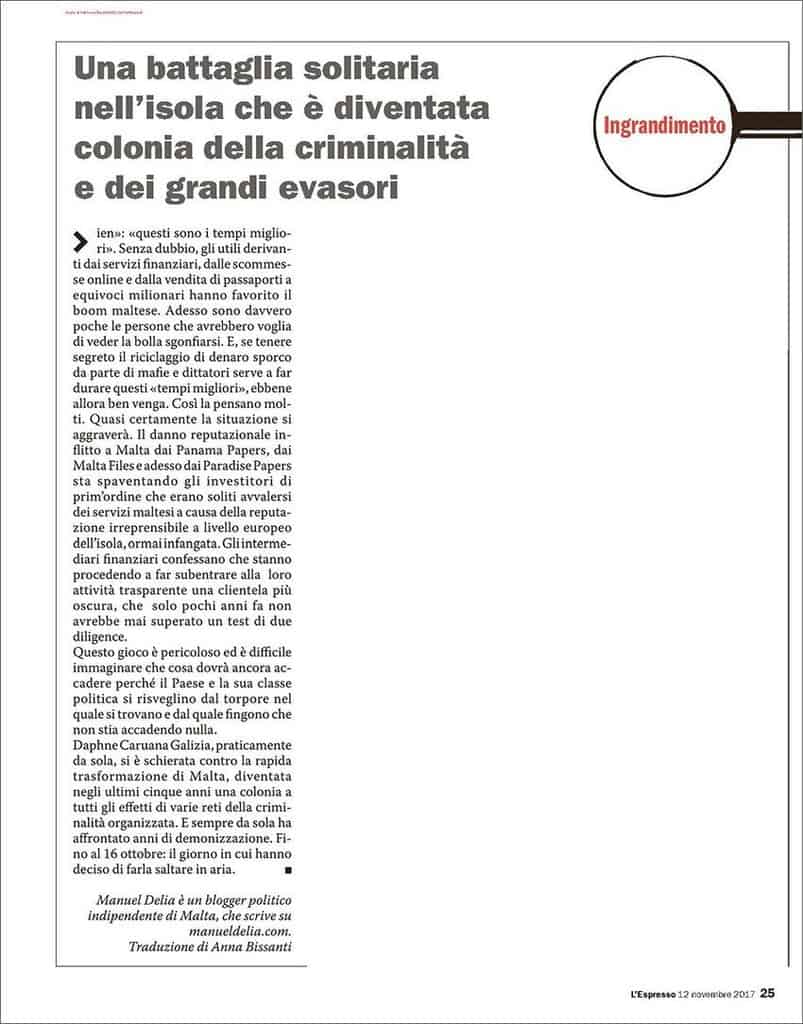 The assassination of Daphne Caruana Galizia in Malta sent shockwaves throughout the world. But not in most of Malta. After a few hours of inane platitudes from the political leaders the country mobilised again along its traditional bipolar lines. In her writings Daphne used to call them “the two Maltas”.

One Malta, a small minority who read Daphne’s work daily, is angry and indignant that greed has been adopted as a national religion opening the doors to Azerbaijani dictators and sundry mafias to launder their money here.

The other Malta, the great majority, is angry and indignant that the picture postcard image of Malta outside the world is being besmirched by people like me writing this article.

Never has this cultural split in the country been more pronounced. The Labour government, secure in the support of the majority, has turned the page on the Daphne Caruana Galizia assassination and is putting up a front of ‘business as usual’. The Nationalist opposition, traditionally the paladin of good governance and transparency, has now elected a new leader who wears not having paid taxes as a badge of honour. Both sides of parliament are rushing in unseemly haste to push the national agenda away from the issues raised by Daphne in her life and her death.

The protests by the civil society network, a small rag-tag group of middle-aged volunteers, attract a small and dwindling rump of traditional Nationalist party supporters embarrassed by the compromising attitude of the new leadership of their old party.

The emerging leaders that galvanized the mourning supporters of Daphne’s anti-corruption mission were outside the civic leadership of the country: Antonio Tajani who mobilised the entire spectrum of political opinion in Strasbourg to stand up in protest against the killing of a journalist, and Malta’s bishop Charles Scicluna, the first bishop in some 40 years to make bold and crisp statements of political controversy demanding action from an ambivalent government.

But most of the local population remains unaffected by European displays of grief. They cling to the Labour party’s slogan for last June’s snap election, called after Daphne uncovered alleged illicit payments from the family of Ilham Aliyev of Azerbaijan to the family of Malta’s premier Joseph Muscat. That slogan was “l-aqwa żmien”: ‘these are the best times’.

There is no doubt that income from financial services, online gaming and the sale of passports to shady, anonymous millionaires, has given the Maltese economy a boom. Few people are keen to see that bubble deflate. And if covering up money laundering for the mafias and for evil dictators help keep the best times rolling, then, for many, so be it.

Things are likely to get worse. The reputational damage done to Malta with the Panama Papers, the Malta Files, and now the Paradise Papers is scaring blue chip investors who used to use Malta’s services because of its now tarnished squeaky-clean European reputation. Intermediaries in this sector privately confess to be replacing this clean business with shadier, seedier clients that would have failed due diligence tests a few years back but are now much needed just to keep the wheels turning.

This is a dangerous game and it is hard to imagine what needs to happen before the country and its political class wake up from the slumber of pretence that nothing wrong is happening.

Daphne Caruana Galizia, practically alone, stood up against the rapid transformation of Malta over the last 5 years into a full-blown colony of faceless organised criminals with local politicians acting as puppet governors in exchange for tangenti. She faced years of orchestrated demonization and dehumanisation until the day she was blown to pieces.

It seems likely most of the country wants nothing better than for life to go on as if she was never there. But misguided wishful thinking rarely, if ever, proved to be effective and successful long-term policy.

Previous:L’Espresso: Matthew Caruana Galizia on his mother and her work (English original)
Next:THE SUNDAY TIMES: The change within