Mr Kenneth Ciappara, whoever he is, posts on Karol Aquilina’s Facebook wall, and sums up the thinking of the little man in such a stark and erudite manner that it cannot go unremarked. My translation follows. 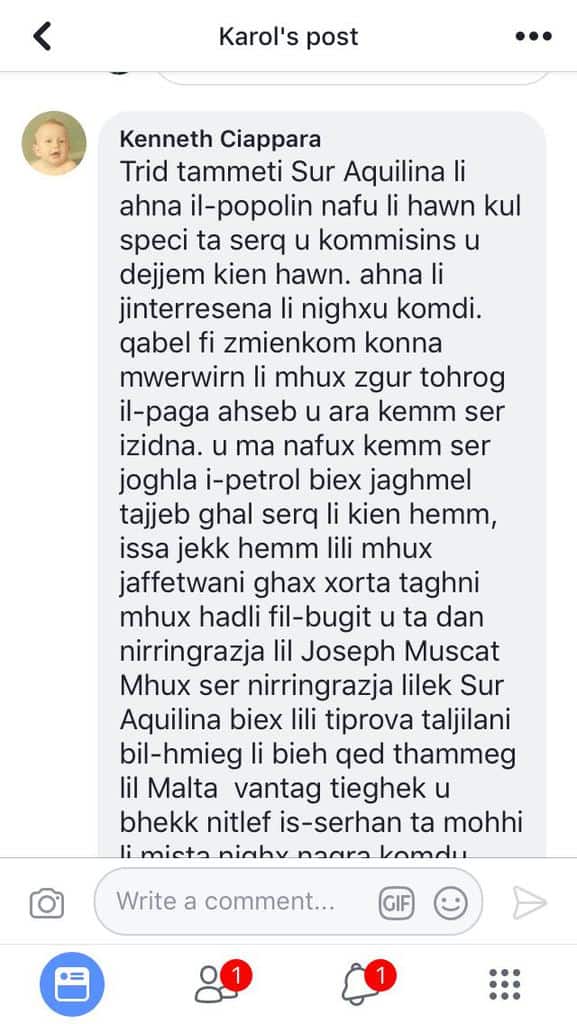 One would have to admit Mr Aquilina that we the people know that there is all sort of stealing and tangenti going on. You would have to admit there always have been. What really concerns us is living the good life. In your times we used to always be unsure our pay would be paid, let alone getting a pay rise. We wouldn’t know how much the cost of petrol would go up to cover for the stealing that went on. If there is stealing now it is not having an impact on me because (the government) is still giving me, not taking away from my pocket. For this I thank Joseph Muscat. I don’t thank you Mr Aquilina for trying to distract me with muck that you’re using to damage Malta for your advantage and causing me to lose my peace of mind that I could live the good life.

This is, in a 150 words the précis of current popular thinking. Right or wrong are distinctions for the intellectual snobs. And they should keep those thoughts to themselves because publicly pointing out the wrong jeopardises the benefits from it. There is no doubt there is corruption. But while the little man shares in its proceeds, it is to be wished for and protected from criticism.

There’s also the sophistry that anyone attempting to justify what they know to be wrong has no choice but to resort to. There has always been corruption. There will always be corruption. The inevitability of it all justifies it in and of itself.

Finally the two standard syllogisms that form the skeletal framework of Labour logic, such as it is and as it has been since 1949.

The really depressing thing in all this is the core paradox at the heart of political discourse in Malta, the one that has torn at the heart of the PN’s approach to communicating with the population for longer than I can remember.

Labour’s Mintoffian contempt for the intelligence of people allows them to organise their communication in four-legs-good-two-legs-bad language. It is indeed contemptuous to think people would buy such self-serving and weakly conceived lies. But it is also effective. Hey presto the above mentioned Mr Kenneth Ciappara and a great, crushing majority of the population.

How do you fight this hydra of lies? The available alternatives are not many. Repay it with equally contemptuous spin and lies or speak cogently and rationally and be drowned in the noise.

While I want to sleep every night, truth must be told.

There will always be corruption. It is how punishment is meted out that we must discuss. How wrong is not excused and covered up but made an example of and dragged to jail by independent institutions with the power to handcuff a bureaucrat, a minister even a prime minister if they pocket illicit returns while trading what is left of the wealth of the nation.

Mr Ciappara, you’re paying less for petrol today than you used to for reasons that have nothing to do with corruption. But corruption is causing you to pay more today than you would otherwise would have had to. I wish for you the best life you dare hope for. But at the rate at which the foundations of the economy that can provide that to you are being eaten away by corruption and its inevitable revelation, you should now start realising that your future and  your children’s future is being stolen away from you while you’re not looking, delighted as you are with your present.