If the state is hiding something, it probably means we should know what it is

Here’s David Casa reacting to Manwel Mallia’s remarks earlier about hounding people who revealed information covered up by the government.

No one thinks the agenda of a police investigation or people’s medical records should be opened for public consumption. So let’s not be childish and start confusing issues here. But the principle ought always to be that unless there are over-riding reasons why something should not be published, then it must be.

The government has been hiding under the cover of secrecy laws for the last 5 years. It has treated the media with disdain, keeping contracts under wraps, sealing investigation reports in drawers, and redacting published documents to the point of absurdity. Those three elements are connected.

The findings of investigations are protected by secrecy at law in order not to disadvantage prosecution on the back of those findings. They are most definitely allowed to be kept secret in order to protect suspects reported by those findings.

I have had more than a handful of conversations this week with sources who helped Daphne Caruana Galizia investigate malicious corruption within government and bad administration. At least judging by these conversations, Daphne’s elimination is being seen as an opportunity by government to clamp down on whistle-blowers and sources informing on corruption and bad administration.

I know of at least two cases where the police have been called in to investigate leaks, while as far as anyone can tell the actual maladministration the leak was about was completely ignored and allowed to go on.

Every time the government is criticised for being eaten up by corruption, it cites legislation it has passed to increase transparency. On paper we’re a-ok. But consider the freedom of information act for example. Half the requests made to the government are refused for reasons that ought never to be cited and would almost certainly be dismissed in a fair court if the press could have the resources, the stamina and the inclination to contest the refusals.

The real reason is that the substantive replies the government gives to freedom of information requests are limited to those that benefit its partisan agenda or at least do not harm it.

The whistle-blower act is supposed to protect people who unveil bad administration and corruption. But a clerk in an office handling files for his corrupt boss is not comforted by a law never properly applied. He is threatened by the sight of boys in blue on their pitchforked witch-hunt acting on the instructions of some witch sniffer pursuivant like Manwel Mallia.

When push came to shove the courts protected Daphne Caruana Galizia when Pawlu Lia and Chris Cardona claimed with no shame that as a blogger she was not entitled to protect the identity of her sources. A press card does not the journalist make. Journalists are people who seek to know and inform others what people in power would rather hide.

And this is what makes journalism a pillar of democracy. This is not some flattering complement coined by some politician seeking to ingratiate himself. Journalism ensures democracy works because it is inconvenient to politicians and seeks to uncover what they would hide.

The satisfaction of curiosity is surely insufficient justification for an unauthorised leak. But revealing impropriety is. Not revealing it is an act of passive complicity and as such therefore ethically reprehensible. 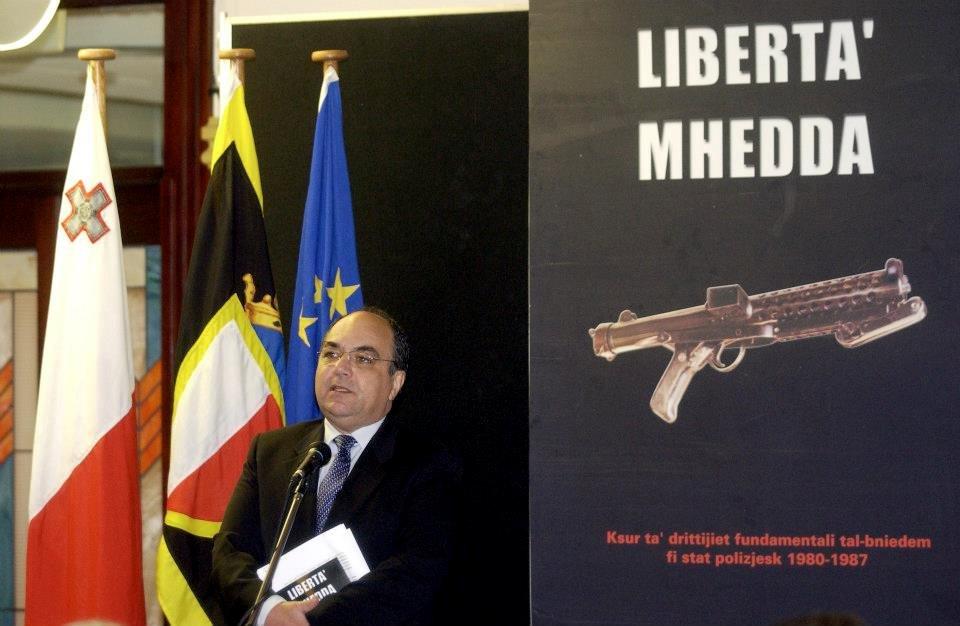 Manwel Mallia’s demands for a clamp down on sources is a threat. It is intended to have the chilling effect of intimidating people and stopping them from revealing the wrong that they know of. It is intended to perpetuate the cover up and to allow corruption in government to flourish without challenge.

I remember Manwel Mallia in different times launching Dione Borg’s important book about political oppression in the 1980s, Libertà Mhedda. He spoke then as a hagiographist of the resistance. I lived through the 1980s as a child unaware of the horrors that surrounded me.

But I’m aware of the horrors around me now. And Manwel Mallia, in seeking to protect their subtlety, their subterfuge, their stealth and their surreptitiousness, now makes himself another chapter in the next edition of Libertà Mhedda some other Dione Borg will have to write about our times.