When hypocrisy is transparent

Jean Claude Micallef is not famous for his consistency. He flipflopped between Labour and the PN according to where he thought his chances for career progression were better served. The PN first received him as parties habitually welcome sheep lost by the other side. But as his oily sleaze ran up the creeped-out collective spines of a rather more selective generation of candidate shortlisters, he found he could not use the PN to advance himself.

Back he went to Labour. Where he belonged all along. And in the callous, unprincipled indifference to right or wrong that makes him, here he is, pretending to be shocked by Daphne Caruana Galizia’s assassination. Here he is, a few hours after the news broke, reading from the prime minister’s hymn book feigning sadness and calling for ‘unity’, for which read oh do shut up about this.

Look at the hashtags at the bottom of his post: #rip #NinghaqduKontraVjolenza #LeGhallHdura. “Rest in Piece”. “Let’s Unite Against Violence”. “No to cruelty”. I admit a slight uncertainty on the translation of ” ħdura”. Native speakers will know what he means.

He withdraws his respect given so melodramatically two weeks before. And he exchanges all those empty unintended words for, literally, “tkasbir”. I had to confirm that with a dictionary. He vilifies the victim. He condemns the victim. He states he despises the victim.

This is the extent of the hate, the ħdura, a PL general election candidate professes. These are the words of a TV ‘personality’ (for so we call the empty vessels on our public broadcasting) about a journalist who has been blown up in a car bomb.

Any self-respecting media house in the known universe would have kicked his butt by now after posting such venom on his Facebook. But this is TVM we’re talking about and this, as she so rightly said, is no normal democracy.

Take the time to scroll through the heroes who tickled his hungry ego by ‘liking’, ‘commenting’ and ‘sharing’ this piece of hate literature that would have made the soldier with the spear on the Golgotha blush in embarrassment.

For your viewing pleasure here’s a screenshot of the Labour Mayor of Żurrieq congratulating Jean Claude Micallef. “Bravu” he calls him because that is the sweetest praise he can come up with. Here’s a man who went on TV while the charred soil where Daphne’s body was consumed was still warm, to announce to loud applause he was giving a kidney to his friend. He spoke of Christian charity and loving thy neighbour.

And then he proceeded to applaud a colleague slime-ball of his, fellow leader of the masses, for leading the vilification of a journalist who was brutally killed for selflessly serving her country. I wish for Mayor Natius Farrugia to live a long life and die in his old age with his loved ones around him mourning him and thanking him on behalf of all of us for his great service to the community. He gives me the creeps and right now I could hardly feel angrier at anyone, but it doesn’t mean I could ever bring myself to rejoice in his or anyone’s untimely death. 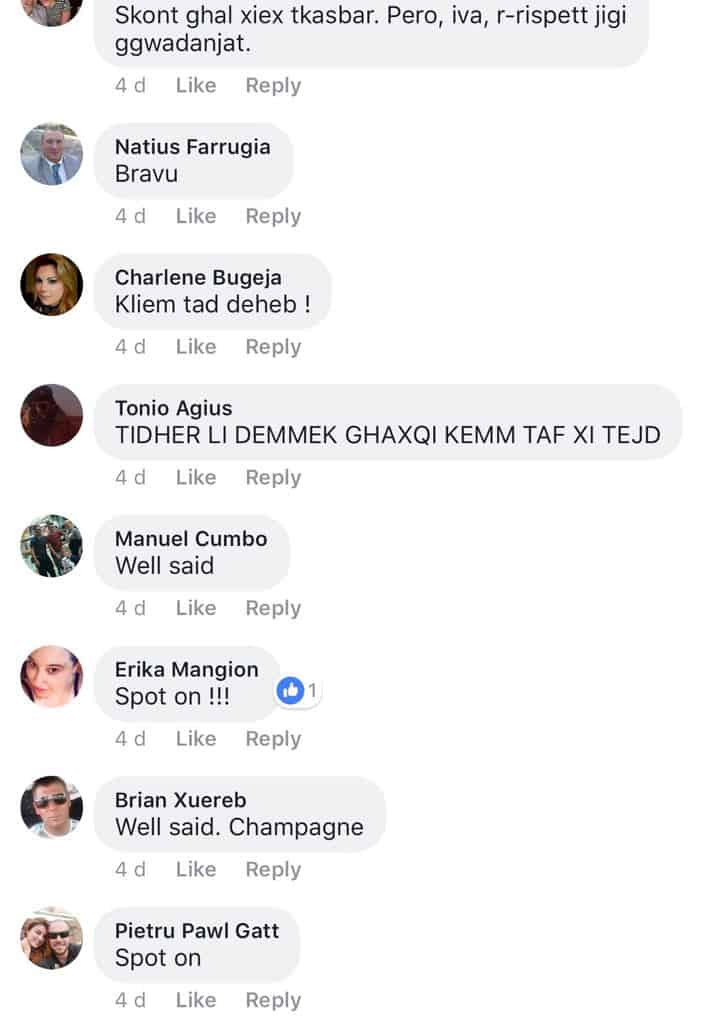 I could spend all day posting links to revolting hate posts. To be honest it is my duty to do so because showing this sickening collective psychology to a nation that does not want to admit it is the first duty of a journalist.

But this tires me so.

Previous:Matthew Caruana Galizia was punched in the face by a bystander while his mother’s car still burnt
Next:Malta should sign the European Convention against corruption involving officials