The government uses laws with discrimination in order to act against those that inconvenience it. The episode with the billboards showed that.

It also enacts laws in order to show off the international assessors and the cronies that find reasons to thank their sodomisers just how transparent it is. It does so because it knows it will apply that law with the same discrimination and self-interest service as it uses planning laws to silence critics. 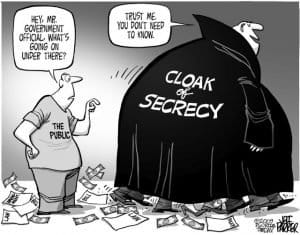 It should be pointed out that in theory that law exists in case of the failure of a higher principle: that government should be open and provide information in the first place without needing to be asked. When that fails the press can ask questions to government presumably because they have questions the government did not think of answering without prompting.

Unless in terms of national security, say, or personal confidentiality, the government should start from the presumption that they should feel obliged to answer any question they are asked. By which I mean that unless I ask for the key code for the gold vault at the central bank or for your grandmother’s medical file, I should expect an answer.

If I don’t get it, there’s the Freedom of Information Act to remind the government who is boss. The government’s record in acceding to requests for information is abysmal.

Newspaper editors are used to being turned down. I found the reaction of the Times of Malta this morning for being refused an answer to the request to have VGH’s performance guarantee published to be almost timid, like that of a broken prisoner fresh out of a year in solitary.

Why do I say we would be better off without a Freedom of Information Act? Because its existence does not help us in any way to acquire more information but legitimises the government’s secretiveness by creating the illusion that they are bound by laws which in any case they ignore.

We have come to accept the government’s utter contempt for our basic right to know what they’re up to with our money. Performance guarantees exist to manage situations that arise with contractors exactly as has happened with VGH. Contractors bind money with a bank that can then be dipped into by the government if they fail on the commitments they make.

Was a performance guarantee bound by VGH? Which bank was it put up with? Did the government check if it was kept in place for as long as the contract required it? Have the government dipped into it when VGH failed to deliver? Above all, as we must now suspect, has it been refunded to VGH?

The government said they could not answer because they need to ask third parties if they would be ok with their reply. Which third party?

Surely not the bank, none of whose secrets are revealed by this except its name and that it provides performance guarantee bond services, two facts no bank keeps for itself.

Surely not Steward Health Care as they, one would presume, are bound by the terms of the concession and if they are bound to provide a guarantee of their performance need make no secret of their predecessor’s failure.

Surely not VGH. Lord, surely no one is asking VGH if they might be offended by the revelation of their complete financial failure since they have announced it to the world themselves when they ran out of air to breathe.

So which third party is the government waiting upon?

Obviously a poor excuse, a barefaced lie. The Times of Malta ought to be beside itself over such an outrageous breach of its right to ask reasonable questions and get reasonable answers for them.

In the quagmire of scandal that is the VGH deal, secrecy, ambiguity, equivocation and deceit are necessary blankets on this bed of iron needles.