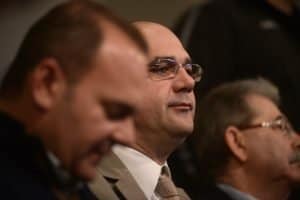 Sandro Chetcuti is paid for the government to advise it even as he lobbies it on behalf of developers. Why?

Asked by Matthew Vella of Malta Today, he says he sees no conflict. To sustain his point he says he often consults the opposition too.

No doubt he does.

Matthew Vella’s report is really well researched because it reminds that Sandro Chetcuti’s engagement with the government is but the last in a history of similar perversions. Michael Falzon, lawyer for fireworks manufacturers, was paid by government to advise them on fireworks policy. And Lino Farrugia, our own Charlton Heston challenging anyone to take his rifle from his cold dead hands, was paid by the government to advise it on hunting.

How is it the government perceives this to be a good approach to policy making?

In a way the government shows complete mistrust in the professionals that it employs in the civil service and the quangos that surround it. There are the sycophants promoted beyond their ability who are largely incompetent and the professionals it inherited who cannot be trusted for the simple reason they weren’t Labour’s choice.

But that does not explain the pattern of putting on your payroll lobbyists who are promoting a policy direction that is at best contentious.

How confident can an environmental lobby be that its views will be taken seriously by the government when facing them across the table is a person who is both acting for government and representing the lobby that is most opposed to their views? Not at all.

And therein must lie the reason for this farce. I doubt Sandro Chetcuti is in any particular urgent need for the 1,200 euro a month the government pays him to clock him as its advisor. Though of course that doesn’t make the money bad news.

But the real reward is in putting lobbyists resisting Sandro Chetcuti’s vision of a concrete megalopolis in a conscious and entire self-aware disadvantage.

Sandro Chetcuti’s own reference to his advice, presumably for free, to the opposition may be exquisitely tender irony but it is also an extension of that inherent disadvantage suffered by those who do not think Malta should become an asphalt jungle. He tells us he’s on the inside with both political parties and neither side can provide any hope of a future where concrete does not flow through the political bloodstream of the country. There’s nowhere to hide if you want to hide from the shadow of high-rises in their mind’s eye. 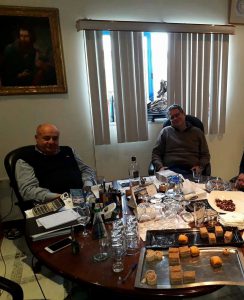 cannot be isolated from this. He did not go into details about his reasons for departure but his committed campaigning against ODZ development and his pregnant line today that he felt he needed to leave the PN to remain “true to his values” leave little to the imagination.

Charlot Cassar is not likely to have been too pleased with the PN’s strident reconciliation with Silvio Debono over the last few weeks. Nor would he have been too comfortable with the meetings taken by the leader of the opposition with other construction tycoons that appear to be lodging the PN firmly in support of building mania.

Jumping to the PN’s defense is its unlikely but habitual ally, Robert Musumeci, the man who brands himself as avukat-perit like a power ranger wearing leotards that do not match his helmet. 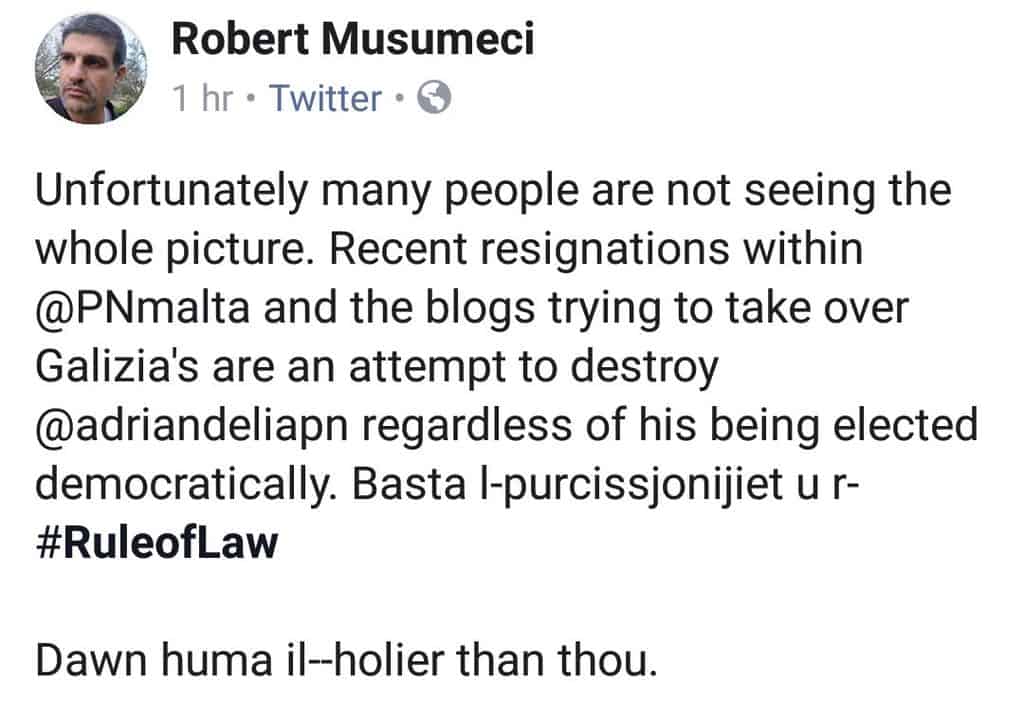 He knocks Charlot Cassar for resigning (and in the process takes a dig at little old me) because any disagreement with the leadership of the PN (which, last I checked, he officially does not support) is in his learned view undemocratic. Not sure if he got that from his architecture degree but I know he did not get it from the law program.

In my book, resigning from an organisation when you feel you no longer agree with it is the most democratic action anyone can undertake. Criticising it, I would submit, is also perfectly democratic.

As Daphne Caruana Galizia put it once when she saw Robert Musumeci mighty morphin for Adrian Delia ‘by their friends you know them’.

Robert Musumeci is a frequent critic of my articles. In better times he used to hash-tag his tweets with #galiziabarra. Now that could possibly get the police to his door. I find it a little amusing if perhaps a bit self-serving that in view of his complex loyalties he cannot start hash-tagging his tweets with #deliabarra.

You can never know who’s reading.