The silence is broken

Some 48 hours after BugM posted his thread on Adrian Delia’s alleged motivation for silence on Gasol, his office has issued a statement to clarify the facts. The response is plausible and largely reflects my comments of this morning. The comments board on my website was not in unanimous agreement with my assessment which obviously I have no issue with. I am not of the view that in this case there is any conflict of past or present interests that could possibly prevent Adrian Delia from criticising the power station deal.

Below this post I am copying Adrian Delia’s statement.

But I have a few points I still wish to make.

Firstly, it should not and cannot take Adrian Delia 48 hours to address these sort of news. That is what Konrad Mizzi and Keith Schembri do. And they do that because they have no plausible response to give because they are as rotten as old corned beef. If Adrian Delia is going to use anybody’s playbook to manage public scrutiny the last one he should pick up is the Panama Gang’s.

I realise Adrian Delia wants to look different from his predecessors in order to show he’s his own man. But if moral rectitude is something he wants to project he’s really ditching the only manual he should be reading, the one written by the PN leadership office of decades past.

Secondly, the power station deal is riddled with conflicts of interests and shadiness of the worst order. Adrian Delia should be screaming blue murder and as distasteful as that must sound to him he needs to sound just like Simon Busuttil when faced by these realities. No one did it better.

Thirdly, if Adrian Delia is confronted by an allegation that he is involved in some swindle perpetrated by the government he must realise he is confronting a resignation scenario. I do not understand where he gets his supreme self-confidence from. If the allegations made against him are groundless he does not give the press the runaround. He chases them with clear explanations, clarifications, denials because he owes it to them.

Which leads me to my final point. Adrian Delia is in parliament because two elected MPs let down the trust and confidence of their voters in order to make way for him. All politicians owe the public a full and sincere account of themselves. But parliamentarians can at least claim, weakly, that they sit there having already persuaded voters of their eligibility for their confidence. Adrian Delia has not even ever done that yet.

His seat is borrowed. And it is not even borrowed to him by the people. It is borrowed by MPs to whom it was granted without any transfer privileges.

The delusion that habitual PN voters are withholding their support to Adrian Delia because they are bitter Chris Said was not made leader or because they still hold a torch for Simon Busuttil is just that, a delusion.

Adrian Delia has not inherited the kudos of his predecessors. He is not the Dalai Lama. Adrian Delia must win over the PN support and some of the PL support if he is to be of any use to the party he leads. If he can’t be arsed to clarify that he is eligible to do the job, only the cronies he has his morning tot with will be supporting him. 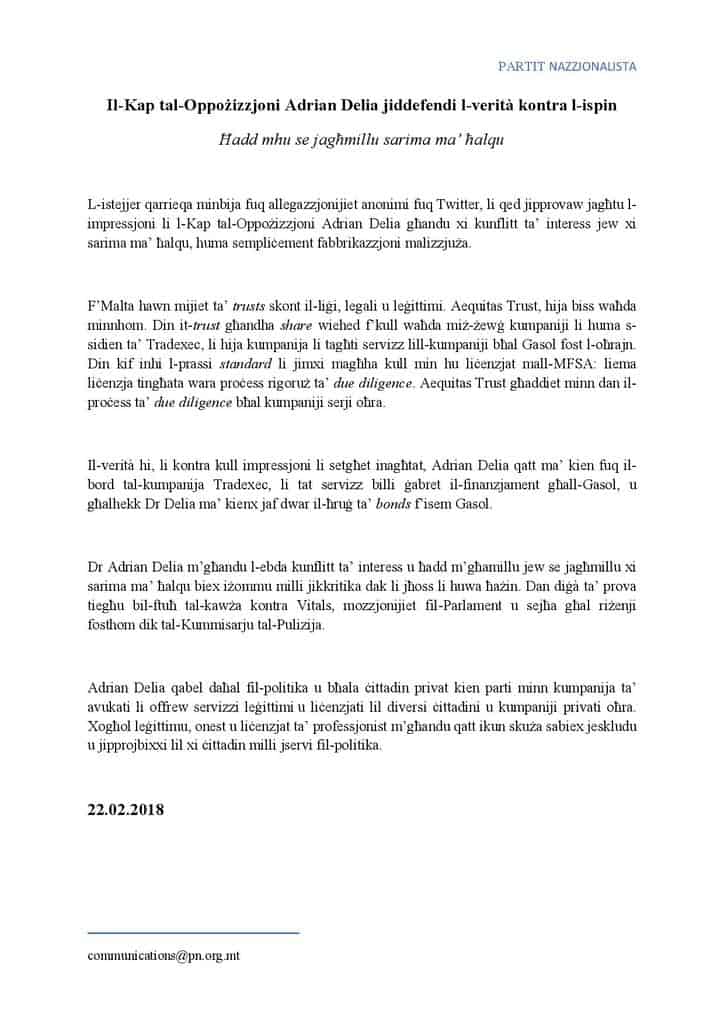 Previous:Where does one begin?
Next:Anti-SLAPP: Europe may have to do it for us.