There’s a name for that 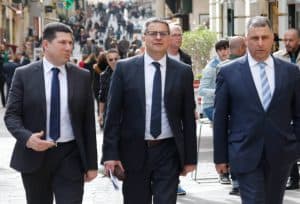 The opposition is doing what the government should have done of its own accord, use the opportunity of VGH’s financial collapse to assess its compliance with the contract and once determining what is obvious to everyone rescind the contract. Then if it really must, start afresh.

The law suit filed by the opposition cannot dispute privatisation on grounds of policy. Whether hospitals should be privatised at all is for a Parliamentary debate. And the opposition can expect to lose that vote however compelling its arguments.

But the law suit is an opportunity to show that while the government honoured its side of the bargain, VGH did not deliver on its commitments. It got nowhere near beginning to provide new hospitals as it had promised.

From the Times of Malta report: “The scandalous agreement had been designed to fail, Dr Delia claimed, as he questioned the identity of the true beneficiaries of VGH”. He’s right.

There’s a word for that. It’s corruption. As far as I can tell Adrian Delia did not use that word today. Nor did he use it in the teaser tweet of yesterday when he announced today’s move in court.

Tomorrow we will be going to court to stop this squander and give back the hospitals to the people. Lets truly give #Malta a national health system it deserves #Justice

I admire the innovative use of ‘squander’ as a noun. But it does feel like the product of an effort to find a synonym for the noun that should have really fit that statement: ‘corruption’. And the final result is not merely unsatisfactory. It’s timid and inaccurate.

Has the cat got your tongue? Call it what it is. Then you can fight it.