Berlin and Brussels to host vigils for Daphne on the 16th 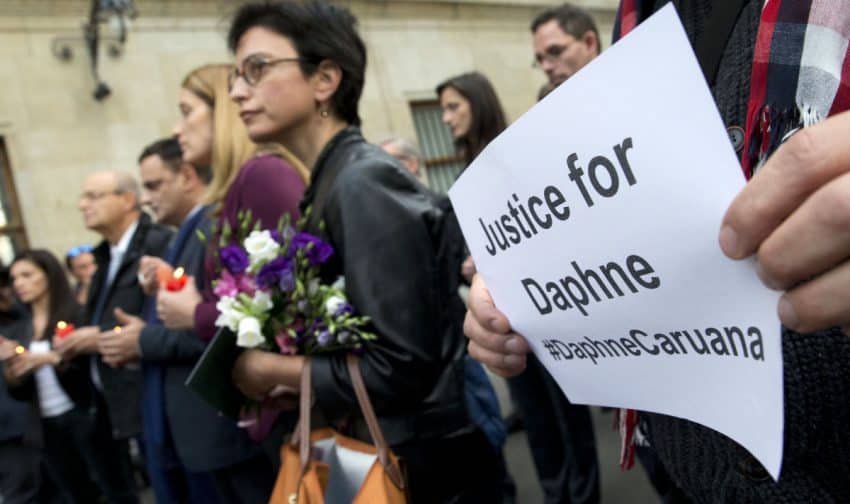 On Tuesday, the European Centre for Press and Media Freedom and the German journalist union Deutscher Journalisten-Verband (DJV) are hosting a vigil outside the Maltese Embassy in Berlin to commemorate Daphne Caruana Galizia, and to make it clear that also a year later, the pressure on the Maltese government to investigate this murder thoroughly will be kept on.

“On 16 October 2017, the investigative journalist Daphne Caruana Galizia was murdered in broad daylight in a car bomb outside her home in Malta. Daphne was investigating and exposing cases of corruption at the highest levels of government.

Since then, three suspected contract killers have been apprehended but there is still no trace of who sent them and why — and it is not clear whether enough is being done to find out.

Since then, the European Parliament, the Council of Europe, the European Commission and the Daphne Project, an international group of investigative journalists who took up her work, have all confirmed what Daphne had long warned about before her murder: that the rule of law in the European Union’s smallest member state has been compromised.

Since then, two more journalists have been executed in the European Union: Jan Kuciak from Slovakia and Victoria Marinova from Bulgaria.

All three of them were working on corruption within their countries. All three stood up for democracy and the rule of law. All three died because nothing else could silence them.

As citizens, let us remember and honour them. Let us hush our voices for those that no one and nothing could silence. Let us meet on 16 October at noon in front of the Residence Palace and show the world that neither Daphne, nor Jan, nor Victoria died in vain.”

Previous:Guest Post: Simon Busuttil and the Egrant inquiry
Next:PD call on people to join March for Truth and Justice