GUEST POST: Afraid of those that break the law 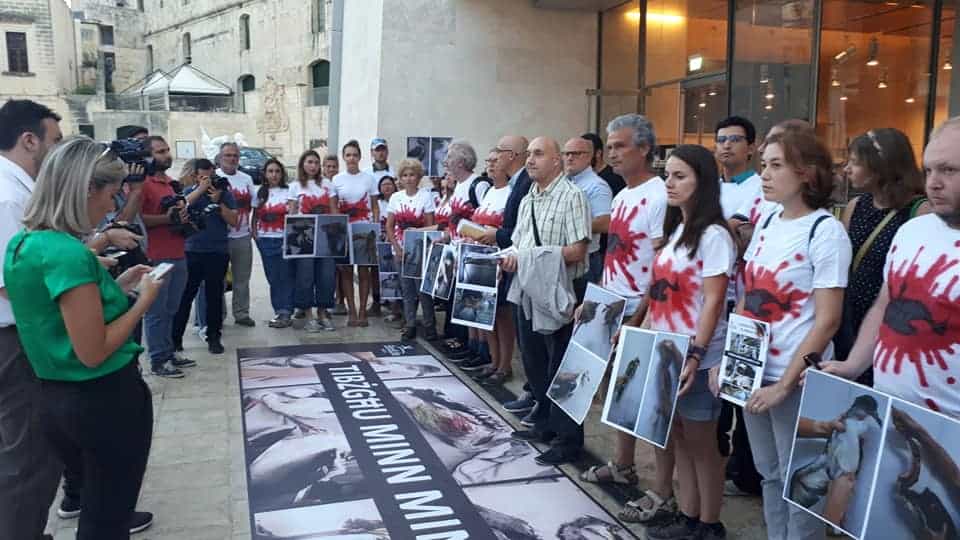 Malta is an island in the middle of the Mediterranean Sea. Its strategic position was always appreciated by war strategists, economists, peacemakers, traders, and the likes since the link between Europe and Africa was crucial for their missions. This train of thought works the same with nature and more evidently with bird migration. For birds migrating between the two continents twice a year, the islands of Malta and Gozo are priceless resting spots and refuelling depots before they continue with their journey. Unfortunately for many birds, the price is too high!

While in the past killing a bird for food was a necessity, the need for man to hunt for food decreased drastically as the country’s economy gained strength, especially after the war. The practice of hunting then became a trigger-happy activity that brought misery to the various species of birds that visited the islands, often ending up stuffed in mounted collections in private houses.  The country developed further and in view of protecting wildlife, laws began to be designed. Up until Malta joined the European Union, these laws kept on improving with the aim of becoming in line with the EU Birds and Habitats Directives.

During the past 30 years, significant improvement has been observed and illegal hunting started to decrease. The statistics and trends show that although there were spikes during the seasons prior to general elections, the trend was still on the decrease. There was always the feeling that enforcement is always diluted prior to general elections and this gave way to the spikes of increased illegal hunting incidents. In fact, 30 years ago we would be talking about hundreds of protected birds killed every year solely from the confinements of Buskett, a bird sanctuary.

With improved legislation, harsher penalties and a more evident presence in the countryside mainly by NGOs like BirdLife Malta and the Committee Against Bird Slaughter (CABS) that monitor the hunting situation, working closely with the police and collecting evidence of illegalities, the hunter today knows he needs to be careful. The real reason for the reduction of illegalities is purely that of the fear of being caught and not the understanding of the conservation value why certain birds are huntable while others are protected. I have no intention of generalising and I am sure there are hunters who understand this concept but unfortunately, the majority would still shoot at a protected bird if they feel that they can get away with it.

In the past six years, we started seeing an upward trend in illegalities. Up until the date I am writing this, we have had 81 protected birds shot compared to last year’s full-year total of 82. Last year was the worst in five years and it is now clear that 2018 will be even worse. This is a record that no one should be proud of and a worrying situation indeed. And we need to keep in mind that the figures I quote are only a few casualties that were found and taken to the vet who concluded that the bird was shot. It’s almost as important to keep in mind that not all protected birds that are illegally aimed at are hit, and from those that are hit, not all suffer injuries that prevent them from flying on, leaving them to possibly die at the sea, never being found. Those that suffer an immediate death are all collected by the hunters who shot them while those that fly on and die elsewhere in our countryside, are hard to find except a few, and these are the 81 I mention. Hence you can easily understand that illegal hunting is more rampant.

BirdLife Malta believes that for an improvement of the situation the Government needs to re-evaluate the bird protection laws, mainly those that were recently changed to make sure they are enforceable laws. New measures in controlling hunting at sea and taxidermy are also very important while re-visiting the dates and times of the hunting open seasons is also relevant at this stage. This will allow law enforcement to be more efficient, however, the enforcement body – the Administrative Law Enforcement (ALE) unit of the police force – needs to also be heavily restructured. This should be transformed into a Wildlife Crime Unit that not only caters for hunting and trapping laws but any other law that protects wildlife. This unit would solely focus only on wildlife crime and should be well equipped with vetted human resources from the police force. Specialist training is also necessary and we are convinced that this unit would be a proud section that can bring a difference to how environment law enforcement is tackled.

Finally, we need the Government and Members of Parliament to have the spine to talk about this issue without any fear. These are illegalities that we are mentioning here and no lobby or person should go against the understanding that this situation is not acceptable and needs to be tackled. No one is asking for the end of hunting in Malta and when considering that there are 40 huntable species in five whole months in autumn and winter, the cliché hideaway comment of “we need to find a balance” fizzles out. My hope is that our proposals are taken seriously by the Government to finally start curbing illegalities. We will remain critical of the Government but still open to working closely with it too as we have always done. Our advice and suggestions are for the benefit of the common good and based on facts and science.

Previous:And now that the international press has flown out
Next:Rai 24: Report from Malta