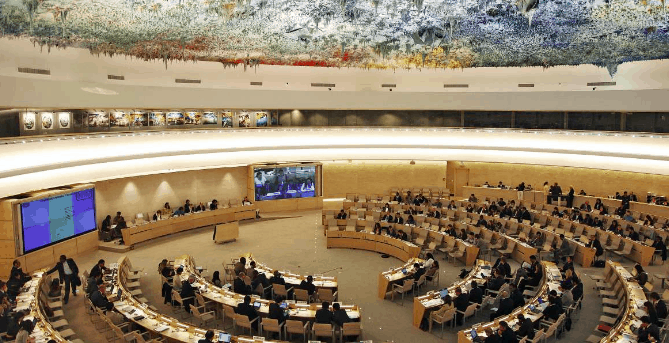 Several countries of the United Nations raised major concerns today about the deterioration of freedom of expression in Malta following the assassination of Daphne Caruana Galizia and highlighted the inadequacies of the investigation into her killing.

At a United Nations review meeting in Geneva today that assessed human rights in Malta, the Swiss government said “there are serious doubts as to the credibility of the investigation by the Maltese authorities into her killing.”

The people Daphne Caruana Galizia reported on may bear responsibility for her death and yet they have not been placed under formal investigation or questioned. The lack of progress in the investigation into Caruana Galizia’s murder is a truly disturbing indicator of impunity.

Switzerland also drew attention to the continuing issue of defamation suits, noting that at the time of her death, Daphne Caruana Galizia was facing 47 civil and criminal libel suits from senior members of government and business people affiliated with the authorities. In 30 of those cases, the plaintiffs have chosen to continue the suits against Caruana Galizia’s estate, effectively forcing her family to defend them.

Germany recommended that Malta changes the rules for the appointment of members of Malta’s Broadcasting Authority in order to enhance public broadcasting independence.

These recommendations and widespread criticism of the deterioration of free speech in Malta were heard during a hearing of the United Nation’s Universal Periodic Review of Malta. A full set of the UN UPR recommendations to Malta, made orally today, will be published on 16 November. The full UPR report will be disseminated on 23 November. The UPR outcome report will be adopted at the March 2019 session of the UN Human Rights Council.

The meeting was attended by Minister Helena Dalli.

A statement by PEN International this afternoon shared the concerns expressed by several UN member states about the deterioration of free speech in Malta. PEN-International spoke on behalf of a coalition of international free speech NGOs.

The coalition of NGOs criticised Malta’s government for completely ignoring the assassination of Daphne Caruana Galizia from its report to the United Nations on its own human rights record.

“This disturbing omission forms part of a pattern of behaviour by the Maltese authorities at international and national fora of intentionally ignoring and downplaying the importance of this case and its implications for press freedom in Malta,” the human rights NGOs said today.