I’m being interviewed on TVM tonight by Brian Hansford who asked me some questions about ‘hate speech’. I try to distinguish between ‘hate speech’ and ‘speaking out of hate’. It might seem nuanced but the difference is important. Saying ‘all Jews must burn’ is hate speech. It is addressed at a group and by the broad strokes of prejudice and collective attributions, it seeks harm for all members of that group. Saying ‘Jacob Rosenberg must burn’ is speaking out of hate for Jacob Rosenberg but it is not hate-speech in the legal sense. It is not addressed at a group but at an individual. This is admittedly a simplistic explanation but for the present purpose it should suffice.

There are bad reasons why Brian Hansford is interested in this topic — the continued vilification of Daphne Caruana Galizia — and there are justified reasons for his interest: that people are feeling emboldened to say all sorts of wicked things on Facebook about other people without regard to consequence. I told Brian Hansford how yesterday my wife showed me a Facebook message of someone imploring his god I find her and my children dead in their beds. That does not fit the legal definition of ‘hate speech’, but there sure is plenty of hate there.

Consider this story coming out of court today. Jasmine Urry was found guilty of defaming a woman on Facebook insinuating things about her because the woman’s boyfriend is not a fan of Adrian Delia.

From the court decision, we learn Josephine Urry published her defamatory post on a Facebook closed group called “Grupp PN”.

This is a thing.

Look at this image from the same Grupp PN from yesterday: 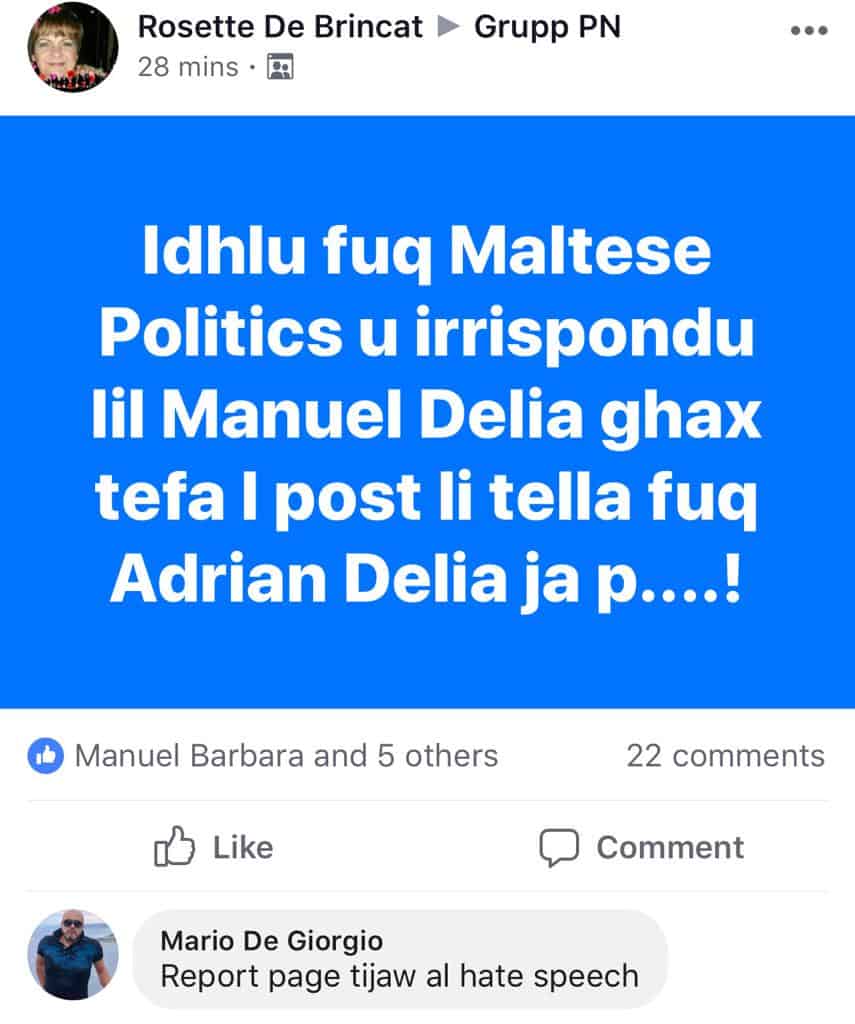 As soon as it was posted the army of what Noel Grima endearingly labels “groupies” go all over Facebook with all sorts of aspersions, innuendoes, and flat-out lies, attributing things to me I never said or rewarding me with millions I’m supposed to have made which clearly I never learnt about. I’m not regaling you with screenshots of these. Life is just too short.

The supreme irony is the comment beneath the above post by another Grupp PN groupie, Mario De Giorgio. His name comes up usually alongside very harsh language but, within Grupp PN he’s among friends. He tells them to report my Facebook page to Facebook authorities ostensibly because I’m the one spreading hate speech. Apart from the supreme irony, this is why the confusion is so dangerous. Criticising their favourite politician, Adrian Delia, is in their opinion hate speech and they want it censored and banned.

They do that because at first Facebook reacts automatically to systematic complaints by several people. So it does work. It’s happened to my page a few times. But after a while, Facebook gets human beings to review the content and that’s when they realise that the content is political, perhaps controversial, but by no stretch of the definition hate speech, let alone a cause for censorship.

Rosette de Brincat, Mario de Giorgio and all their bitter, angry friends are of course free to do what they like. No doubt the PN is embarrassed these guys claim they act on its behalf. Or is it?

Previous:Joseph Muscat missed Remembrance Day Mass because he was “too busy”
Next:The man who laughs