More than 500 people have now joined the ‘Victims of SATA bank’ Facebook group as frustration increases among customers of the bank who have had their bank accounts frozen for nearly a month.

Commenters on the page are telling stories of personal hardship as well as businesses on the brink of collapse. The group also allows members to vent their frustration at ever drier ‘updates’ from their bank that has ever less news to give to its clients. 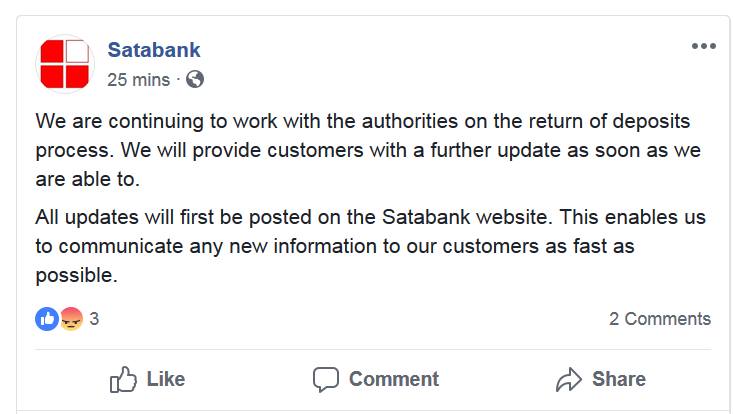 Anger at Joseph Muscat’s remarks last Sunday is also palpable. The Prime Minister criticised those who raised objections on the blanket freeze of accounts at Satabank accusing critics of hypocrisy given their earlier criticism at the MFSA’s more lenient behaviour in ‘other’ situations. The Prime Minister would have been referring to Pilatus Bank that was allowed to operate even after its owner was arrested and indicted for bank fraud in the United States.

Unlike Pilatus Bank, Satabank was a retail bank with several clients using its services to deposit their salaries or to administer the finances of their business.

Several customers are complaining that whatever money laundering breaches the regulator found at Satabank — details have not yet been provided — these are unconnected to their ordinary day to day banking needs and the hardship they are being made to suffer is disproportionate.

Contributors to the group are expressing increasing scepticism the bank does indeed have the funds that will allow them to close their accounts and take their money elsewhere.

The heightened speculation has now made the eventual collapse of Satabank only a matter of time. Even if the bank has enough money to cover all deposits and even if the regulator were to allow it to return to business, few clients are likely to continue to trust Satabank and a run on deposits is almost a certainty.

Commenters are also reflecting on Malta’s ability to meet its promise of a safe commercial jurisdiction operating under the rule of law. An inherent injustice in what effectively amounts to a blanket sanction on all customers of the bank — good or bad — suggests that Malta’s law enforcement is ill-equipped to administer problematic banking situations.

A number of participants in the Facebook group have suggested some form of protest march or demonstration. However, should this happen, it is very likely to be under-representative of the hardship caused by the current situation. A Whatsapp group for clients of the bank shows that hundreds of Brazilians, for example, are unable to catch a bus in their hometown let alone a plane to come to march in Malta.

The same goes for several crewmen that are at sea all over the world unable to send their families remittances as they have not been paid since September.