Continues from yesterday’s article on ‘the role of capital’. 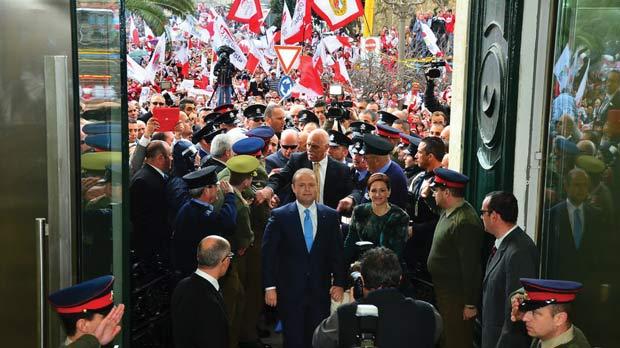 Enter into the scene the inflated pretender Joseph Muscat. He inherited a country with strong economic foundations thanks to the work done by previous Nationalist administrations. At the time of the administration change, the economy was in the process of rebounding skywards because the world recession was over and the price of oil had dipped.

The economic tree that the Nationalists had so patiently sowed and tendered over the previous decades finally burst into full bloom. All Labour had to do was merely gleefully pluck the almost limitless supply of fruit and claim the credit for it. They could not believe their luck.

All the while, the fatalism of Muscat’s economic management is becoming increasingly obvious. The danger signs are all there and it is a mess-in-the-making of their own doing. They are covering up for their own inadequacies by projecting the blame on to the opposition as is their wont.

They treat Malta’s economic resources as a sacred golden cow that is overmilked until it eventually collapses due to dehydration. At the same time, their crookedness can only introduce investments (if you can call them that) the sick cows of EU passport selling, of blockchain finance, of money printing, of marijuana production.  These are likely to infect the entire field.

Their idea of investment revolves around plundering. Like Dom Mintoff, they use the money generated firstly, to enrich themselves as the overclass and then, to consolidate their control and permanence. Only this time, the money supply mechanism has been generated by their Nationalist predecessors.

Labour lacks the constructive qualities required to develop an economy that the Nationalists had in abundance: patience, self-sacrifice for the good of the country, discretion, skilful negotiating, wisdom, restraint and caution, long term vision, good international relations, responsibility, openness to criticism and most of all. intellectual capability.

The professional marathon runner proceeds slowly and steadily, keeping up with the pack. He reaches the final lap relatively fresh and claims victory with a final burst of speed. That is the Nationalist way of running an economy. The Labour way is to catch the limelight in a furious sprint from the start. At the finish line, it is the spent wreck of a figure that clocks in last, if at all.

On account of rampant patronage, the public sector is forever expanding, reversing years of Nationalist policy. The recurrent expenditure continues to increase. Brazen corruption is the lifeblood of Labour and drains the economy of multimillions of taxpayer funds.

The water and electricity bills are almost as expensive as under Lawrence Gonzi’s tenure even though the price of oil is at record lows. In relative terms, we are therefore paying more than before and the bills will get progressively higher as the effects of the corrupt energy agreements play out with time (shades of Sant’s VAT/CET deception).

The national airline is ailing and continues to be mismanaged. Worryingly, large scale investment is starting to decline even though small investments are on the increase. They undid the construction/environment balance that Lawrence Gonzi had instituted in order to make the construction industry the main driver of the economy. They ditched all directives of good governance within the civil service lowering its quality.

As a result of out-of-control construction, the tourism product deteriorates. The cost of rent, foodstuffs and cost of living continue to rise inexorably while wages remain the lowest in Europe. A growing sector is getting poorer while the capitalists get richer. The economy is dependent on cheap slave labour just as Mintoff’s economy relied on cheap labour. As the foreigners’ financial conditions become untenable, surely, they will migrate to better living conditions. The government deficits will progressively rise because of the increased recurrent expenditure.

Even if the economic figures the government rams down our throats are genuine, they do not reflect the reality of the common man’s living conditions. Labour inflated the economic figures of an already well performing Gonzian economy by stimulating over-construction and by selling EU passports, two crude plundering initiatives. Any patient on high dose steroid therapy will tell you that the temporary feel-good boost is then followed by deleterious long term effects, some of which are irreversible.

A BBC interviewer’s comparison of Labour’s government style to a Dickensian outcast society was particularly apt. The leaders of this gang revelled in the accumulated plundered wealth but the living conditions of their subjects remained appalling.

Labour has not improved upon the high standard of living under the Gonzi administration. The future of international banking in Malta is at risk. More importantly, the revelations of corruption unveiled by international sources and the subsequent tragicomic behaviour of Labour has damaged Malta’s reputation and image. All this is self-seeking Labour’s doing and threatens the economic prospects for the future.

Muscat’s Labour is repeating the same mistakes as its hallowed founder since, after all, both subscribe to the cardinal tenet of absolute power in the Labour creed. Their abuse of money generated by the economic structures of Nationalist administrations is keeping him in power, although mismanagement of the economy will eventually render it unsustainable.  Like Mintoff, he is planning a glorified exit as matters are likely to get worse year by year.

The Nationalist economic tiger was well groomed by successive trainers despite the unfavourable prevailing conditions. Under a new trainer who pushes it to its limits, it will run amok.

Previous:We should know what he knows.
Next:GUEST POST: Running away from a stolen home