This is the fifth part of a series arising from an interview with an ex-staff member at the AUM. Part 1 is here.

Despite his longstanding academic career and positions of serious responsibility in various academic institutions, including the honour of being the first university president in Azerbaijan at Khazar University, Baku, John Ryder has only published one original book. With the exception of a collection of critical essays by other 20th-century philosophers (American Philosophic Naturalism in the Twentieth Century (Prometheus Books, 1994)), Ryder has only one full and original academic book to his name, which triggers memories of that theatrical character, Professor Taranne, where this investigation began.

Ryder’s book, The Things on Heaven and Earth, begins in the theater with a quote from Hamlet: ‘There are more things in heaven and earth, Horatio, then are dreamt of in your philosophy’. Viewing the ultimate philosophical task as being to tackle the complexity of human experience, Ryder’s aim is ‘to articulate a philosophic perspective through which it is possible to make sense of whatever experience and thought reveal or generate, however they reveal or generate it.’ (John Ryder, The Things on Heaven and Earth (New York Fordham University press, 2013). Thus, we can move from the rational to the irrational and on to Hamlet’s ghosts. That realm of mists glimpsed thinly through a veil, where fair is foul and foul is fair, and all that is solid melts into air. That sorcerer who conjures up a world of illusions and convinces us it’s real. 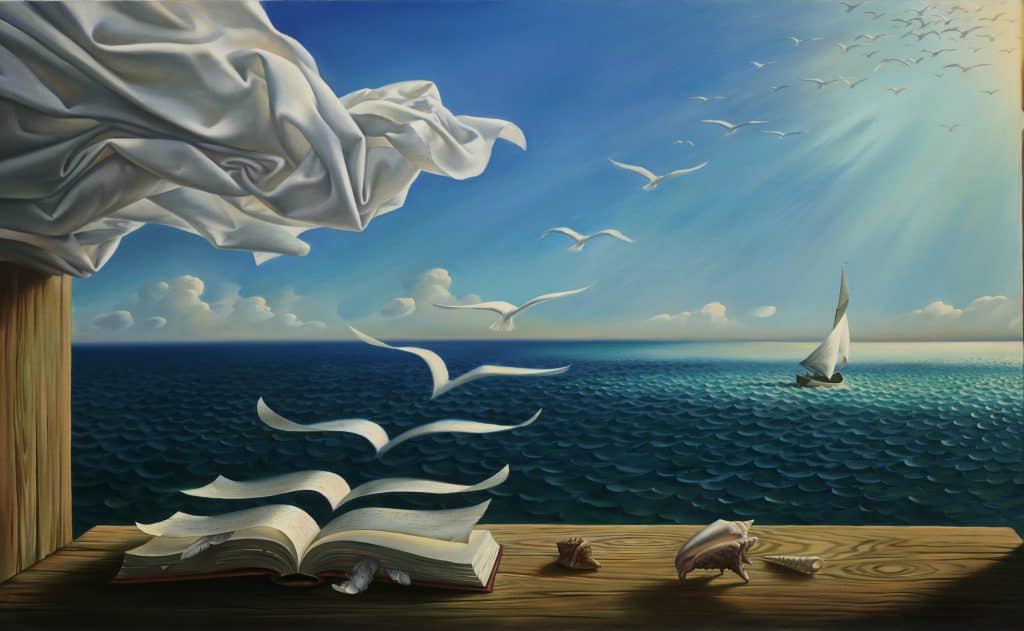 Martin Scicluna, in the speech he gave in his role as Chairman of the NCFHE, was adamant his audience should believe that ‘the most rigorous educational and financial due process’ had informed the Committee’s decision to offer a university license to the American Institute of Malta, albeit with 16 conditions attached. Indeed, this large number of conditions merely confirmed the rigour with which the decision had been reached because nobody wants to give anything away for free.

Right at the start, Martin Scicluna stresses the independent nature of both the Commission and its decision, something which, in an above board kind of context, should be a sine qua non. Nevertheless, the objectivity circumscribed by independence is undercut by Martin Scicluna’s value-laden mode of defence, something again which would usually be unnecessary in a transparent process of impartial evaluation:

‘Nor have we been influenced by the views which have been expressed either by some over-zealous government officials not responsible for making this decision, or by the Opposition, on the desirability or not of acceding to this application. Or by the various interventions made by academics, educational commentators, the media or others – many of which have been ill-informed or self-serving.’

Ill-informed and self-serving academics and educational commentators? Who needs them when all you’re trying to do is award university status to an ‘American’ university in the hands of a Jordanian hotel developer who demands great swathes of public land to accommodate his over-burgeoning intake of students?

Hailing from an army family in colonialist Malta, and following a career in the British army and British civil service, Martin Scicluna returned to his home when he retired and worked as security advisor and Ambassador to NATO for Nationalist Eddie Fenech Adami then PL Alfred Sant then back to Eddie Fenech Adami. His penchant for bed-hopping is on a par with Franco Debono and he did this literally in a column he wrote for the Times of Malta shortly before the last election. Entitled ‘Hobson’s Choice’, he derides Simon Busuttil for being:

‘led by the nose of a blogger, who has convinced him and his supporters on the basis of highly circumstantial evidence – which has not passed any test in any court of law – that the Prime Minister, his wife and his two closest advisors, Konrad Mizzi and Keith Schembri, have been complicit in major acts of corruption.’

While he finds Muscat guilty of not demanding the resignations of Schembri and Mizzi following the Panama Papers revelations, Scicluna makes time once more to attack both Busuttil and Daphne Caruana Galizia:

‘Busuttil is guilty of ratcheting up the accusations of “corruption” for party political reasons, based on allegations and speculations of a notorious blogger who has waged a campaign of mudslinging, innuendo and disinformation modelled on the Breitbart assault on Hilary Clinton.’

A campaign which was so successful that it resulted in her assassination four and a half months after Martin Scicluna threw his mud. Indeed, he threw his own shitload of unadulterated bile so successfully that the Today Public Policy Institute publicly disassociated itself from its former director-general on the grounds that as an impartial non-partisan and public policy think tank, it ‘neither shares the writer’s sentiments or reflections on the electoral options nor his logic in reaching his voting conclusion.’  In contrast to Martin Scicluna, the Today Public Policy Institute reaffirmed that it stood for good governance and the rule of law.

There’s no small amount of irony, dramatic or otherwise, in the fact that during an interview given in 2004, Martin Scicluna stated that ‘The rule of law is what makes for a civilised society.’

Nevertheless, no-one wants ‘over-zealous’, ‘ill-informed and self-serving’ pesky intruders butting in when you’re doshing out a license to an ‘American’ university mired in controversy and public protest. And just to ram it home to these cynical dissenters, Martin Scicluna reminded his audience that the Sadeen Group and Sadeen Malta Holding Company Ltd and Sadeen Education Investment Ltd and the American University of Malta Foundation had all been ‘the subject of a thorough financial due diligence process, which has been carried out by independent international auditors, PricewaterhouseCoopers.’

He does love the word ‘independent’, doesn’t he, and while we’re on the subject, Martin Scicluna himself worked for PricewaterhouseCoopers for three years, giving him inside knowledge of the operations of that particular enterprise.

But he didn’t need to mention that any more than he needed to cite John Ryder’s presidency at Baku when he explained how the procedures were implemented for the accreditation of the AUM.

After a ‘hiatus’ of three months in summer 2015, while the applicant (the American Institute of Malta) reflected on its stipulated need ‘to enter into a contractual relationship with an experienced third party that would guarantee probity and due process in its Quality Assurance (QA) procedures, as well as integrity of outcomes’, up popped John Ryder in October 2015, ‘the newly-hired Vice President and Provost of the proposed AUM’:

‘all the relevant documentation was reviewed and resubmitted. Professor Ryder has extensive experience in American-type universities, and was previously Vice President and Provost (roughly the equivalent to the Rector in the University of Malta) of the American University of Ras Al Khaimah in the United Arab Emirates.’

Yet no mention of Baku which, by then, was well-known as the place where Joseph Muscat, Keith Schembri, Konrad Mizzi and Kurt Farrugia had held their secret meeting with President Ilham Aliyev in December 2014, although it wasn’t until almost a year after Martin Scicluna made his speech that a private jet took off from Malta Airport and made a stop there before moving on to Dubai, the same night Ali Sadr left Pilatus Bank carrying suitcases and the same night that the Police Commissioner was busy tucking into rabbit.

But even in June 2016, when Martin Scicluna delivered the decision of the NCFHE, Baku was a household name in Malta as the place where deals had been made with the Azeri state-owned oil company, SOCAR, which not only supplies LNG to Malta but owns 20% of Electrogas. As we know, the Chairman and part-owner of Electrogas is Yorgen Fenech who owns 17 Black, set up to funnel money in the form of kickbacks to the offshore companies opened by Brian Tonna of Nexia BT for Konrad Mizzi and Keith Schembri.

For some reason, Baku was omitted in Martin Scicluna’s introduction to John Ryder.

Again, there’s no doubt some straightforward explanation but whereas Martin Scicluna gives the date of John Ryder’s appointment at the proposed AUM as October 2015, John Ryder’s LinkedIn indicates that he was Deputy Vice Chancellor for Academic Affairs – and not Vice President or Provost – at AURAK until July 2016, nine months after he was supposedly hired by the AUM. This also means that when Martin Scicluna was actually delivering the decision of the NCFHE (June 2016), John Ryder was still working in Ras Al Khaimah. Perhaps that’s why John Ryder was happy to turn a blind eye to some of those newly-appointed faculty members who kept their previous jobs on the burn. One can only hope that a little more precision and attention to detail informed ‘the rigour and thoroughness of the due diligence process’.

But we have to remember, as Martin Scicluna reminds us, that they ‘were dealing here with a start-up university application…in this case the applicant was starting from scratch. He had to adapt to the high standards Malta demands, which entailed a steep learning curve.’

This could just be a Freudian slip but previously, the applicant had been referred to as ‘it’, as befitting faceless corporate entities like Sadeen Group, Sadeen Malta Holding Company Ltd, Sadeen Education Investments Ltd and the like. Given we now know what Martin Scicluna at that time apparently did not, that Sadeen Education Investments Ltd is solely owned by Hani Salah, it’s an interesting slip of the tongue and not a little unsettling in terms of ‘the high standards Malta demands’.

Several doctoral theses could be written about these ‘high standards’ and certain aspects will be examined in more depth in the next part, pursuing them link by link, chain by blockchain. After all, if we follow John Ryder’s logic – not a bad example given that he’s head of the AUM which is the subject of this analysis – then the aim is to make ‘sense of whatever experience and thought reveal or generate, however they reveal or generate it.’

But we need to tread carefully because, as the ex-AUM staff member said during the interview, ‘There’s a lot of stuff like this in Malta…It’s like there’s almost a hanging threat that if you tell the truth that something’s going to happen to you.’

Previous:Repubblika: Put brakes on Constitutional changes
Next:When is a university not a university? (6)