As an uncompromising republican, perhaps this is a good time to say that just because I publish a guest post does not necessarily mean I agree with all the guest author says. This one is by Aaron de Giorgio, who is not as committed to the republic as I am. 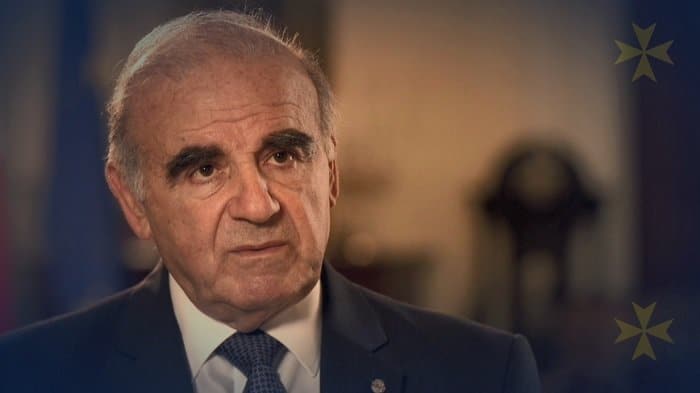 The Oxford English dictionary defines ‘serenity’ as: “the state of being calm, peaceful, and untroubled.”

It is the word which has been most abused by Labour ministers, grandees and puppets, right after the term ‘rule of law’.  They all claim to be ‘serene’ and that the Labour party or government (those two words can always be interchangeable when Labour is in government) must carry on its ‘hard work’ ‘serenely’.

I run a business and employ people and I have never had a ‘calm, peaceful and untroubled’ day running my own business, as all entrepreneurs and business owners will attest.  There is always a problem that needs attending to, a headache which needs soothing and dozens of e-mail messages, bills and invoices to see to.

Joseph Muscat, Chris Fearne, Owen Bonnici, George Vella: the lot are apparently calm, peaceful and untroubled.  The despicable cynicism and arrogance they display is beyond description.

George Vella wants us all to be serene.  President Vella has obviously not ever experienced anxiety when stuck in the ‘perception’ of a traffic jam and being late for an appointment, he has obviously never been ill or knew anyone who is struggling with illness.  He either really believes that Malta is a calm, peaceful and untroubled place or he does not have a dictionary.

I always find history to be useful when framing events in context.

Yankovych was elected Ukranian president in 2010.  He rejected a pending EU association agreement and instead decided to cozy up to Russia.  His citizens were largely upset, and this led to large protests. On 5th December 2013, then Foreign Minister George Vella was in Kiev (attending the same meeting which the German foreign minister used to pointedly snub members of the government and meet members of the Opposition instead), as major protests were taking place all across the country, particularly in Kiev.

TVM One rang Vella for a telephone interview and amid absolute mayhem in Kiev, he said (my translation): “In the city [Kiev] you would not notice…it is as if nothing happened.  There is an air of liberty and no violence, no threats, no fear or tension.  It is simply that there is a nation that is…lots of youngsters who are obviously making their voice heard.”

By January 2014 the serious political upheaval and massive public protests turned into deadly clashes and by February, the country appeared to be on the brink of civil war, with clashes between protestors and special police forces leading to many deaths and injuries.  Yankovych subsequently fled into exile.

Vella gifted us another jewel a month later, on 4th January 2014 (I quote from the actual CNN report): “Speaking with CNN’s Isa Soares, George Vella said that while he didn’t want to blame the migrants, they “do not help themselves” in the immigration enclosures as they “break toilets” and “smear the place.”

On 9th November 2016, Foreign Minister Vella met British Foreign Secretary Boris Johnson in Valletta.  The Malta Independent reported that “During the ceremonial handshake photo opportunity, Maltese Foreign Affairs Minister George Vella could be heard saying: “Let’s have a handshake and get rid of these people”, referring to the press.”

George Vella had no qualms to serve in Mintoff’s government from 1978 to 1987, and never a squeak was heard from him as people were shot, protestors were beaten up, The Times building was torched, the Curia and the opposition leader’s house were ransacked and his wife assaulted. We are told by party insiders that he was opposed to thuggery.  Evidently his seat in parliament was more important to him than speaking out for liberty, truth and justice.

George Vella was Labour party deputy leader when Alfred Sant declared that the Labour party had won the EU referendum (Labour was against joining the EU) despite the fact that the vote had gone the other way by an absolute majority.  George Vella was blind to the danger of unleashing the Labour party’s hard-core supporters on to the streets to celebrate, as the pro-EU camp was also out celebrating, leading to moments of high tension across the tiny island.

George Vella’s judgement – mostly the lack of it – has been greatly harmful to this country.

Yet it is to this man, and this man alone, that the country is now obliged to appeal as the custodian and guardian of the constitution, for in this miserable state, he is the president of the republic.  George Vella is blind to the current political crisis, he is blind to the obligations bestowed on him by his office, he is blind to the responsibilities of his office.  Professor Kevin Aquilina has amply and publicly guided him in his blindness to how exactly the constitution empowers him and binds him with “a constitutional, legal and moral duty for [him] to act and act forthwith”.

George Vella’s horse appears to have missed his damascene moment and the scales have not fallen from his eyes.  He is blind to the demands of democracy, he is blind to the absolute necessity of a free and independent press (“Let’s have a handshake and get rid of these people”), he is blind to the murder, corruption, cronyism, nepotism and arrogance threatening Malta’s constitution.

It is precisely because of Malta’s incestuous political class, which is almost inevitable in a small island, that I have, since I was 14, believed that it was a grave mistake and a great error for the Nationalists to vote in favour of a republican constitution.  In another world and at another time, under the 1964 constitution, the Governor General would have been untainted by a history in politics and would have vigorously acted, without fear or favour, answerable only to the Crown, to defend Malta’s constitutional bodies and their independence from the executive.

I will digress to say that in “The Maltese Constitution and Constitutional History since 1813” by former Chief Justice Professor J J Cremona (Professor Cremona was the author of the 1964 constitution and the subsequent changes), there is a footnote to say, in smothered language, that changing Malta’s constitutional status from an independent monarchy to a republic by a mere two-thirds majority vote in parliament was in fact illegal: it required a popular referendum to do so.  Nationalist opposition MPs mostly failed to observe this constitutional nicety in 1974: look at where you get to when you ignore legal and constitutional safeguards and practices.

Sensible, responsible and mature democracies in the Commonwealth have retained the Crown firmly in place. Canada, Australia, New Zealand and other monarchies in the Commonwealth know and understand that it is a great guarantor of constitutional stability.  Countries with leaders like Mintoff and an inferiority complex broke away to become ‘fully independent’, and by that term, read: “for their leaders to do what they like without let or hindrance”.

This year’s 45th anniversary of becoming a republic reminds us, as it does many former monarchies, that it is a dangerous constitutional parody.  A burlesque form of government built by politicians for politicians.

Most of the ten wealthiest and most stable countries in the world are monarchies (save a couple), and the ten most corrupt, poor and lagging countries are all invariably republics.

Previous:Azerbaijan civil society: Ilham Aliyev’s corruption is not the people’s fault
Next:Socialist MEP says EU Commission can no longer drag its feet and must act on Malta’s rights violations