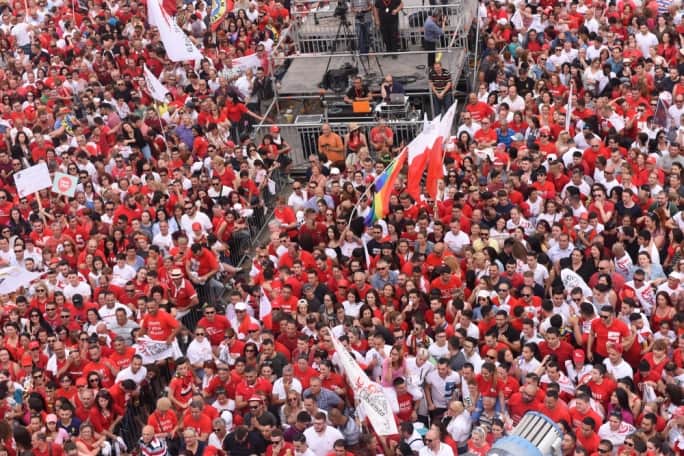 We Maltese are peculiar, very odd people although God has been good to us. We go back to around 6,000 BC and we built the first free standing buildings in the world, more than 2,000 years before the Egyptians had even dreamt of the pyramids. Then in AD 60, destiny, or divine action, decided to shipwreck St Paul, while on his way to Rome, on one of our shores.

As Luke narrates in the Acts of the Apostles (28:2)

And later we learned that the island was called Malta. And the people who lived there showed us great kindness, and they made a fire and called us all to warm ourselves.

We kept the faith brought by St Paul alive, even when we were dominated by the Romans, the Arabs, the Normans, the Angevins and the Aragonese. In 1427, under the rule of Monroy, the Maltese 30,000 florins to redeem their land, though the money was not really paid in full. Then the Order of St John (later known as the Knights of Malta) came, then the French and finally the British.

We can claim that the Maltese saved Europe twice from empires that wanted to conquer it. In 1565 they triumphed against the might of Sulieman of the Ottoman Empire and in 1944 against Hitler and his Luftwaffe. After gaining Independence in 1964 Malta changed from a military base to an island based on tourism and manufacture. We continued with our progress and 10 years later we declared ourselves a Republic. Malta’s zenith arrived on May 2004 when we joined great nations in the European Union. Our flag flew proudly next to the flags of Germany, France, Britain, Italy and a host of other European countries.

The road was not an easy one, especially during the eighties. The Nationalist Party won the elections of 1981 but, through gerrymandering Labour kept power through Parliamentary seats. The following five years were the worst Malta has ever seen. I call them the years of fire.  Ministers were involved in corruption, contraband, jobs for the boys and Malta was ruled by untouchable criminals like a fiefdom. The Opposition clubs were burnt down a hundred times, the family and house of the Leader of the Opposition were physically attacked and The Times gutted.

After all that in 1987 the Nationalist Party took power with a margin of a mere 5,000 votes. They continued in government until 2013. By then the party was in disarray, tired and undermined by its own members of Parliament, seeking power. Joseph Muscat scored a historic win in 2013 with a huge margin of 35,000 votes. From the beginning Joseph showed us how he was going to run the country. During his first week in power he gave Café Premier to a close friend and donated €10 million to the Labour Party in the form of Australia Hall. Secret accounts were opened in Panama by Konrad Mizzi, Keith Schembri and ‘someone more important’. Corruption ate at Malta’s core values. Muscat called for an early election (the real reasons are just coming out from court hearings) and marvel of marvels he won again with a difference of more than 35,000. Strange people, we Maltese. Looks like voters condoned corruption.

Joseph Muscat continued following the same corrupt ways. Keith Schembri, Konrad Mizzi and the usual gang (to use the way Mr President described them) kept making money from corrupt deals like Steward Healthcare and the Montenegro wind farm. Evidence heard in Court shows that his office – the OPM – was bound to the plot to murder investigative journalist Daphne Caruana Galizia. Joseph Muscat was forced to resign in shame in December 2019 after massive civil society protests. He bowed out wearing the crowned of the most corrupt person in the world in 2019. But the only real change was the name of the Prime Minister. Robert Abela forced Chris Cardona and Konrad Mizzi to resign but he still defends Joseph Muscat.

Most of the other crooks are untouchable and still roaming free. Now with the appointment of a new Police Commissioner we, the people, expect more action, more investigations and more arraignments. All the evidence is there. More than two years since magistrate, now Judge, Aaron Bugeja asked the police to charge Karl Cini of Nexia BT with perjury have passed. Nothing happened. Tens of reports by the FIAU are still sitting somewhere in the office of the former Head of the Economic Crimes Unit, Ian Abdilla and Keith Schembri, besides his economy with truth in Court, is still doing business, through his wife, with the government.

Malta has the sword of Damocles hanging over its head. We are waiting to be grey-listed by Moneyval, ranking us with the likes of Botswana, Cambodia, Ghana, Mongolia, Trinidad and Tobago, Yemen and Zimbabwe.

This will bring disaster to our reputation, already very low amongst investors.

And yet, according to the latest surveys, the PL enjoys a 30-point advantage over the Nationalist Party. This means roughly around a 50,000 votes difference. So, with all the corruption in government, in every public authority and the continuous breach of the rule of law, the strange Maltese people are willing to endorse once again the Labour Party in government. Strange, very strange people we Maltese.