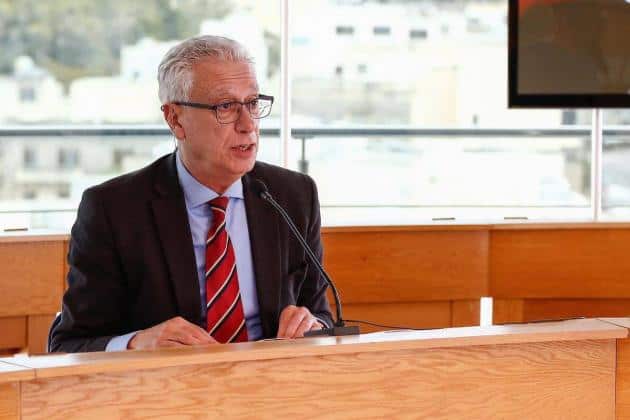 As you surely remember, I together with a group of core PN   friends, had met you privately, to discuss our concerns regarding the leadership of the PN under Adrian Delia.

During our meeting, you had shown appreciation of our concerns, and you had promised us to follow them up directly with Adrian Delia, appreciating that, these could add value to the Party and stop the alienation of votes of persons within our wider social, professional and business circles. The main points were:

An honest and unconditional public apology by Adrian Delia, to the family of Daphne Caruana Galizia, for repetitively calling her a ‘biċċa blogger’, and vociferously inciting his weekly audience against her, at the Party district clubs, in his run-up to the elections for the leadership of the party;

A public apology by Adrian Delia for the coining of the phrase ‘the Daphne crowd’, meant also, to incite his followers against persons attending the monthly vigils in memory of Daphne Caruana Galizia, and to fight the causes which Daphne was single handedly fighting, and for which she was heinously assassinated  by the Castille gang, aided and abetted by the impunity of the forces of law and order;

To immediately set up an Independent due diligence commission, to replace the ‘Kummissjoni għall-approvazzjoni tal-kandidati’, to assess the credentials and transparency of every person aiming for a formal post within the Party Committees, including Local Councils.

You will also surely recall that, you never came back to us with assurances, except ‘Għidtlu’ (I told him), that you had, as promised, discussed the issues with the Kap, let alone with his reactions. In fact, the only happening of mention, which came to us through the media, was that the Secretary General disbanded the ‘Kummissjoni’ mentioned above.

As regards the finances of the party, on which you now wonder if there is a gold mine hidden in some basement unknown to you, I hope you also recall that I had, during the meeting on your bringing up the subject of the precarious situation of the Party’s finances, mentioned the inherent financing problems of both political parties, which could only be addressed with a serious political party financing law. I did also highlight, in this respect, that political parties because of the intensity of cash donations, are ranked as high risk, like cash intensive commercial businesses. In fact, I highlighted that:

Donations in cash and/or cheques issued as ‘Pay Cash’, can be highly open to misappropriation, by anyone collecting and/or receiving funds for the benefit of the party and its committees or district clubs;

The non-submission by both political parties, of audited financial statements of their media companies to the Malta Business Registry, are not in adherence with good governance.

As regards the financials of the party, I hope you are factoring in, the responsible approach of the party, which included yourself as well, in investing in property used as the ‘Dar Ċentrali’ and district clubs with the advantage of not paying rent. At today’s property market values, the PN made a substantial unrealised profit, to be relied upon on a rainy day. In fact, your mention to selling Party property, is generally correct, however the two instances when the Party sold two properties, were necessary and led to goodwill with the lending banks resulting in a reduction of the high interest rates that the banks were charging, as the overall exposure and risk became less.

It is unfair to mention lower interest rates being currently paid by the Party, without making reference to the substantial Internationally driven market reduction in bank lending, and without mentioning the success behind the ‘Ċedoli’ scheme launched by Anne Fenech under the leadership of Simon Busuttil, whereby the Party is paying a fixed 4% for a longer term, as against the 8-9% it was paying before. A good unbiased read of the PN published audited accounts will testify to this.

While I do not intend to mention the political play you mention, as this is not my area, I cannot conclude my letter without commenting on what I consider as your cheeky reference to the Egrant publication and the Vitals court case:

The publication of the Egrant Inquiry Report, was granted by the Court to  the Leader of the Opposition, not because it was Adrian Delia, but only as a result that it was he who was occupying that Constitutional post. Had it been someone else, the court decision would have applied just the same. In fact, it would have been a serious wrongdoing, if the Leader of the Opposition did not institute proceedings in the interest of the general public, irrespective of political beliefs or non-beliefs. How I wish that Adrian Delia carried his responsibility likewise, in respect of so many other instances of corruption and reports on corruption.

It is blind loyalty to your Kap, or incompetence, to even mention the inquiry report, when Adrian Delia, within two or three hours from the publication of the 50 page conclusions to the report, condemned, or was prompted to condemn, Simon Busuttil for having constantly and consistently flogged the Egrant issue, like he did with other corruption issues engineered by the Castille gang,

Robert, since the publication of the full 1500 page report, which was welcome by everyone and not just Adrian Delia and the PN, I have not seen a deep analysis by Adrian Delia to further justify his diatribe on/and sacking of, Simon Busuttil, or to apologise for his quick intended condemnation of Simon.

I have also not seen a request by Adrian Delia, for magistrate (now judge) Aron Bugeja and/or the Attorney General Peter Grech, to reopen the inquiry, on the strength of articles I have already written, pointing to conclusions based on incorrect information/documentation, probably fed to him by the investigating Economic Crimes team led by Deputy Commissioner, Ian Abdilla.

As regards Vitals, I can assure you that, like all other cases exposing corruption, the merit goes exclusively to Adrian Delia’s ‘biċċa blogger’, Daphne Caruana Galizia, who was heinously assassinated by the Castille Mafia gang. What is surely attributable to Adrian Delia, are the number of libel cases he filed against her, to add to her already long list.

Regards and I hope to meet you at the elections for leadership, obviously with opposing choices.

Previous:GUEST POST: Light at the end of the tunnel?
Next:Evarist’s original sin