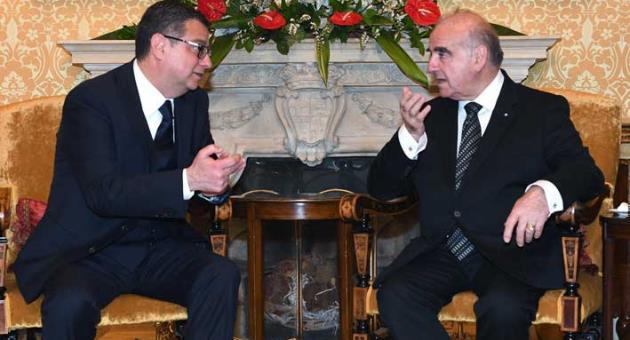 The constitutional rules about what happens when a leader of the opposition no longer counts a majority of opposition MPs as his followers have been on our statute books since independence. They’ve never been used before now. They’re a bit like the fruit juicer your mother bought you when she thought you needed to change your diet after your return from studying abroad.

It’s been in your cupboard gathering dust for a decade or three. And the day you pulled it out because lightning struck and you decided to juice fruit, you found the fruit juicer doesn’t work. It splutters and smokes and produces nothing.

Article 90 of the constitution has proven to be a dead letter. Or at least the President of Malta, George Vella, has found himself unable or unwilling to put it to use. Maybe over time he lost the instruction manual. The intention of the authors of that clause have been forgotten. Article 90 has never been discussed in Parliament and there are no records to go back to. Instead like much of the constitution it was drafted in a smoke-filled room in the Colonial Office in London by some long dead bureaucrats, handed down by the Queen and signed into law by a governor-general of her choice.

So here we are.

Our government is freer than ever to conduct its business without any practical scrutiny opposing it. Parliament has become even more purely decorative and ceremonial than it has been. The leader of opposition is not only a joke because he’s Adrian Delia and we all know what that means. He’s a joke because he speaks only on his behalf and on behalf of a handful of hangers on.

Robert Abela criticised the PN today for turning to the President to solve its problems. That’s such a deceitful remark. Parliament is a constitutional body. The leadership of the opposition is a constitutional role. The PN is neither of those things.

The President does not fix problems for political parties, or at least it’s not what he should be doing. The President had a job – one of very few – required of him in the constitution. That job involves removing a leader of the opposition the minute they know they no longer enjoy the support of the majority of their group. Adrian Delia doesn’t. He did not remove him.

George Vella acknowledged the constitution needs him to remove Adrian Delia but out of fear of the consequence of that action, by his own admission, he elected not to do what the constitution demands of him.

So now we’ll have to see the Constitutional Court spend the next year striking our President down, unless it’s interrupted by our Prime Minister who will apply his discretion to call a general election in the middle of this mess.

How shameful that we have nowhere to turn.

What has happened here is that yet another institution has failed to do its job and the Labour Party benefits from that by default.

It is not the PN that has been short-changed. Malta continues to be betrayed by the institutions that are supposed to run it. George Vella’s non-decision flies in the face of democratic and constitutional precepts.

I’m not saying that the decision was straightforward. I’m saying that this country and its people are entitled to a system of government with clear rules where people in office would have an idea of what they’re doing. If we have a constitution that allows Adrian Delia to keep the title ‘leader of opposition’ when he clearly isn’t, but is instead a leader of a small segment of MPs that is a distant third in a ranking of four parliamentary groupings, than we have a constitution that is no longer working for us.

What I’m saying is we have come to a point where our institutions cannot govern the country. Instead our rules are there to preserve the power, immunity, influence and permanence of clowns and crooks like Konrad Mizzi, Joseph Muscat and Adrian Delia supported by the cretins and grovelers that bang on the Parliamentary desks when they speak.

Adrian Delia will stay on as leader of opposition. Happy days. Call that an opposition, do you?

George Vella spoke of the issues within the PN like a marriage councillor hoping for a reconciliation he wants to be credited for without the burden of interfering. When what was needed of him was a decision that the constitution requires from him and only from him.

Our democracy died a little bit more today. But Ċensu l-Iswed is happy.