I can understand why keen PN supporters were cheered up by Malta Today’s poll of yesterday. This is the fourth month in a row without the sort of existentially catastrophic results polled by the PN during Adrian Delia’s tenure. 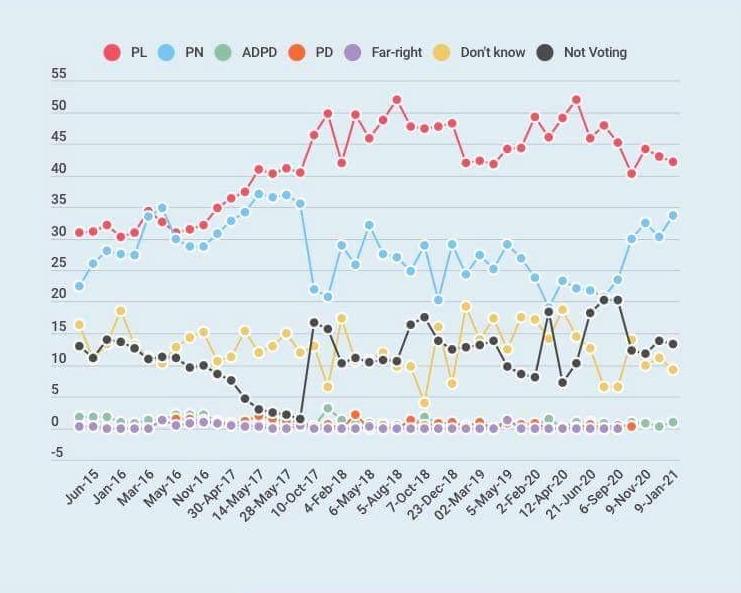 The good news first. The risk of a constitution-busting two-thirds majority for the Labour Party now appears to have been skirted. Sad as it is that Malta remains a two-party state that’s positively desirable when compared with becoming a one-party hegemony.

It is good news because if these trends are kept up, the PN has graduated from “who knows if it will still be around next year” to “viable opposition”.

But there should be more good news near the end of a second term in opposition for any party, let alone a party that has shadowed Joseph Muscat’s corrupt regime, the killing of a journalist and the would-be-comical-if-it-wasn’t-deadly covid-friendly incompetence of Robert Abela’s government.

And yet, all the great push forward that Bernard Grech’s handful of months as party leader has managed to achieve is bringing the PN approximately where it was when it lost the 2017 election.

This is in no way meant to underestimate just how massive that push forward has been. From ratings below the 20% mark, the PN is now consistently scratching at the psychological benchmark of 35%.

As long as everybody is clear that all 35% can get you is a credible, useful, well-supported parliamentary opposition. The numbers needed to defeat Labour are of an altogether different magnitude.

On the one hand then, if trends persist, Bernard Grech has secured for his party a state of play which is approximately equivalent to wiping Adrian Delia’s 3 years from history. But of course, though you can wipe the polling damage, you cannot wipe away the time that passed. The PN lost 3 years it should have used to acquire a record as a strong opposition, to build bridges with pockets that voted Labour since 2008, opening up new fronts on which it can fight with a tactical advantage and reacquire its long-lost image of a governing party.

The PN may be approaching an election year with the same ‘fighting chance’ shortfall behind Labour that it had before 2017. At that election, Labour had been in government for 4 years and people were still generally unwilling to switch back of the PN in spite of all they had heard about Labour’s corruption. That was due to a number of reasons. Their reasons to be annoyed with the PN were still fresh in their mind; the PN had not undergone sufficient change since it lost power in 2013; they preferred to give Joseph Muscat the benefit of the doubt arising from his denials of the corruption allegations that only proved true after the election.

But now, 4 years later, the gap between parties should have narrowed, even turned around. A governing party, even without the disasters we’ve experienced the last few years, should be trailing a refreshed opposition. Instead Labour is going for the next election reasonably confident of a victory it deserves less than ever.

What a bloody waste.

Previous:Robert Abela’s life hacks: If you don’t like what your doctor tells you, fire them.
Next:Was the advice to keep schools closed a minority report?