How we dropped our guard against corruption

Earlier today I spoke at a seminar organised jointly between Repubblika and the Ragusa chapter of Italian anti-mafia NGO Libera. This was my intervention. 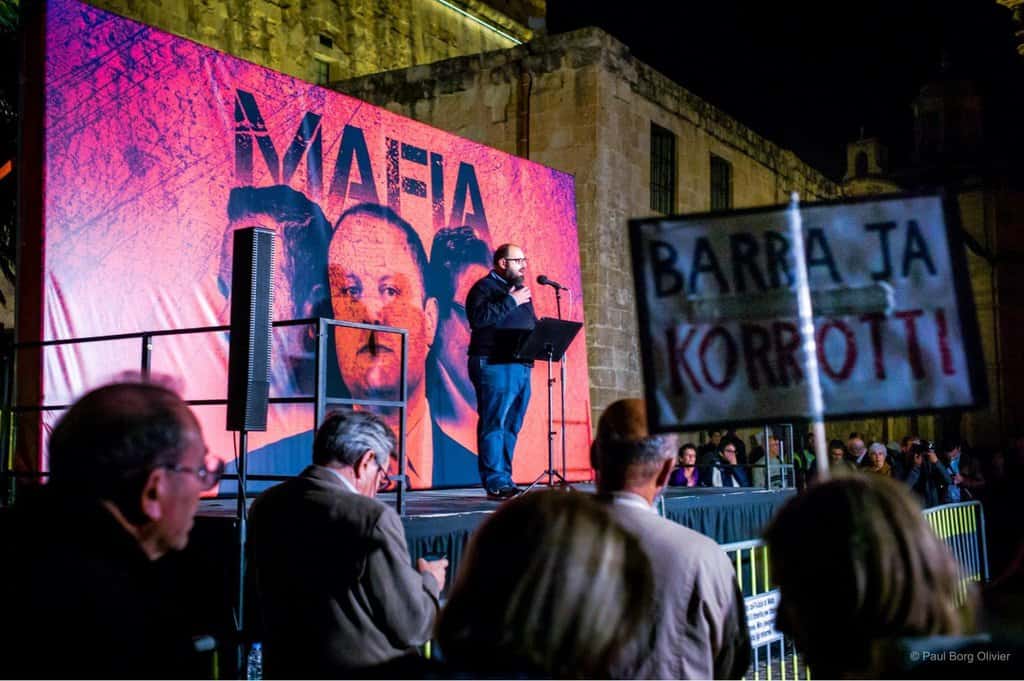 Malta has always had to be creative about finding ways of making money. The most remarkable thing about it is that it is small. And crowded. Primary resources are inexistent and manufacturing is hampered by logistics and economies of scale.

That is why perhaps the only thing Maltese political parties always avoided to disagree about was growing Malta’s financial services industry. In the 1980s things started in a rather blunt fashion. Malta offered itself as an off-shore destination which would hide the identity of depositors as an off-shore jurisdiction in the classical sense would.

But when Malta applied to join the EU in 1991, the country soon realised it needed to be a bit more sophisticated. Over time it aligned with international banking standards and since 2004 Malta is no longer a secretive financial destination. It is not exactly proactive with information but it is not secretive either.

The real clincher during the negotiations to join the EU was that Malta persuaded the EU to allow it to continue operating a very advantageous tax regime. Non-residents with businesses in Malta end up paying less than 5% corporate tax, much better than any other option. And, here was the attractive bit, you were still doing this in the EU.

That allowed customers who were sensitive about how their tax structures looked but still wanted to pay less tax. To name an example Lufthansa’s pension fund could never go to, say, the Cook Islands, to avoid paying tax. They could get away with Malta.

Since 2004 this business boomed along with parallel activities like online gambling or promoting Malta’s maritime flag. Business grew and grew but the country’s institutions failed to keep up with that growth.

Understand that the bulk of Malta’s economy and wealth then is not related to domestic economic activities. Malta has some 30 banks but only 4 or so operate in the domestic market. All the others handle money for people or businesses based elsewhere. It’s true that the government charges them a very low tax rate. But it’s relatively easy public revenue as none of it needs to go to cover the infrastructural or social welfare costs of those businesses.

The government will not need to provide, say, capacity in public hospitals, to handle the hundreds of thousands of employees in businesses operating in other countries but who paid their tax in Malta.

The mistake that was made was to fail to realise that law enforcement agencies in Malta could no longer be designed to accommodate the requirements of domestic economic activities. Malta may have the financial flows of a world-scale financial centre. But it has a police force which is proportionate to the needs of a middling city of some 400,000 people.

I also underline that in spite of a proliferation of enforcement and intelligence agencies set up here as a result of EU directives, the only organisation in Malta that can actually put handcuffs on someone and bring them to justice is the Malta police. Until recently it seems clear to us the Malta Police did not in practice recognise financial crime as a crime. If there wasn’t blood on the floor, they wouldn’t even know that they were needed to kick into action.

Now of course many of the banks and the gaming companies and the financial businesses who established themselves in Malta did so because tax in Malta was low, the language was English, the sun is warm and the laws are European and modern. Beyond that they were entirely legitimate businesses. But when you open your doors to good business, some bad business comes in with it as well.

That is where the weakness of our law enforcement combined with our openness to global business became a toxic combination of vulnerability. Until just a few months ago Malta’s police force employed just one qualified accountant. That person was supposed to make sure that the billions upon billions that flowed through Malta managed by institutions and procedures so complex they are designed to confuse American, British and Italian financial police, were all clean and proper.

The first and most fundamental indicator that something was not right in Malta was the enormous disparity between the money that flowed through here and just how few prosecutions happened here.

Even without evil intent and corruption, crime would grasp that opportunity. We know that Cosa Nostra, the Camorra and the ‘Ndrangheta coordinated their presence here, using Malta’s international services to address their money-laundering needs. At best Malta was miserably naive in the face of this. Much as financial crime is not recognised as a crime, financial criminals are not recognised as criminals.

There are heaps of cases of full blown mafiosi flying in Malta and entering into partnerships and business relationships with Maltese service providers that would generally speaking be zealous to keep a good reputation.

But to blame all that has happened on naivety is superficial.

A point when things became institutionally sour in Malta’s approach is no doubt when Malta put its own citizenship up for sale to ultra-wealthy people. The USP of Malta’s passport scheme is not just that one can acquire a European passport. It is that. But that alone is almost worthless unless it is combined with the sort of secrecy that Malta guarantees to those who buy its passports.

When you have secrecy, you are very likely to have evil intent. The OECD described schemes like Malta’s, and Cyprus’s, as an implicit back door for money launderers seeking to enter the European and worldwide financial system.

On one level this reflected Malta’s ability to detach the profits it makes from servicing international dirty money and the blood of the victims of its clients that is spilt far from our eyes.

It starts then with the moral compromise of attracting financial services customers that pay little tax here in the process avoiding to pay their fair share of tax in the country where they do operate where governments need revenue to provide the infrastructure and the social welfare their businesses, their suppliers, their customers and their employees need. We call it tax structuring instead of tax evasion and we drown our conscience in the profits.

But it reaches an altogether different level of moral ambiguity when we launder here proceeds of crimes committed elsewhere, or we enable, through the secrecy afforded by the passports-selling scheme for example, crimes to be perpetrated with our silent complicity.

That takes us to the next level, then. That inevitably these corrupt and criminal interests would seek to secure the arrangements they have made by ensuring people in political, administrative and law enforcement power in Malta continue to allow them to do what they want to do.

Corruption, of course, exists everywhere, at any level and in every country. Corruption is also proportionate to the interests it is seeking to protect. Malta’s last 8 years have been a veritable nightmare of institutionalised corruption. The first level you come across in this respect is the classic bribery in public contracts where politicians and administrators pocket a share of the illicit profits made by contractors who would otherwise be ineligible for the public contract.

But in order for that sort of corruption to persist you need to make sure law enforcement agencies do not have the autonomy, the competence or even the interest to clamp down on that bribery. In order to secure this, Malta’s very own domestically brewed mafia, infiltrated law enforcement institutions, particularly though not exclusively the police, to ensure these agencies are prevented or inhibited from enforcing the law.

We have seen evidence of that sort of infiltration in the judiciary, in the prosecution services, in the financial intelligence infrastructure, even in the media and the opposition political party.

Consider that 2 of the banks that were licensed in Malta since 2014 have since been shut down by the European Banking Agency and the European Central Bank for operating as money laundering machines. Yet, though both banks have been closed for a number of years now, the Maltese authorities have charged nobody – no one at all – with any financial crime.

That touches the heart of the problem in Malta right now: impunity. Consider another example. On 16 October 2012 the president of the European Commission Jose’ Barroso fired the European Commissioner nominated by Malta, John Dalli, for corruption and collusion with a private interest that was lobbying for a health directive John Dalli was responsible for.

All the evidence against John Dalli was sent to the Malta police, the only agency with the authority to do anything about it. And of course, till now, they’ve done nothing.

They’ve done nothing about Ministers and politicians exposed by the Panama Papers and by much evidence since that has exposed a direct connection between the bribes they stood to take and the killing of Daphne Caruana Galizia.

When you lower your guard so much; when your institutions are so thoroughly unarmed or even so complicit; other criminals will come in and party while the sheriff sleeps. It pains me to say it but this institutional desert has become an oasis for the smuggling of fuel, drugs and people and a haven for financial crime.

We are promised that Malta has turned the corner and things will be getting better. But this is the country that still won’t honestly confront the reasons Daphne Caruana Galizia was killed. I find it hard then to be optimistic. And yet here we are.

Daphne’s last written words were that there are crooks everywhere you look. She said the situation is desperate. And yet she did not intend that post to be her last. She was determined to fight on. That means she still had hope which kept her going. We’re still here. We’re not giving up.

Previous:GUEST POST: Our ‘U Ejja’ culture
Next:THE SUNDAY TIMES: A point of view