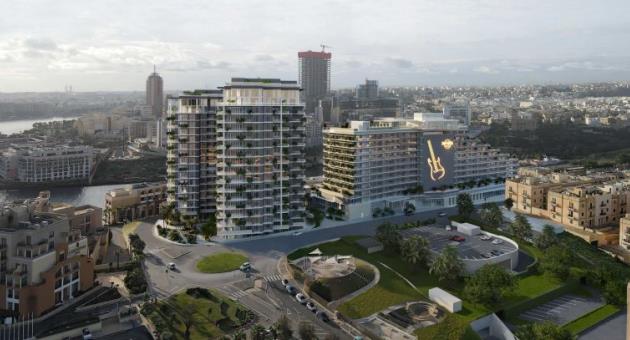 The appeal against the Planning Authority (PA) vote of 10 June 2021 approving the second version of the db ITS project at Pembroke has been presented to the Environment & Planning Review Tribunal (EPRT). The objectors are three local councils: Pembroke, Swieqi and San Ġiljan, 9 NGOs and 10 individuals including Pembroke and Swieqi residents. The appeal, with its 22 objections (AGGRAVI) has one overall aim: the cancellation of the decision reached by the PA on 10 June 2021 giving approval by 4 votes to 3 to the db San Ġorġ Property Limited proposal with PA designation PA03807/17.

A short history of the project applications: in September 2018 the PA had approved the first version of this proposal by db San Ġorġ with a designation of PA03807/17.  An appeal was lodged with the EPRT, which appeal was rejected. Thereupon the objectors had recourse to the Appeals Court.  Judge Mark Chetcuti, ruling on only one of the objections – that one member of the PA who had voted on the proposal had had a major conflict of interest, found for the objectors. As a result, the PA vote was declared null and void. No Court order for another vote was issued and none was requested by the PA.  After a spate of acrimonious exchanges with the PA, db San Ġorġ started putting together another proposal which eventually came up for a vote in front of the PA on 10 June 2021. Just before the session started, the PA insisted that the individuals who had voted on the proposal in 2018 could not vote again, citing the Appeals Court sentence of Mr Justice Mark Chetcuti in support of this ban.

Back to August 2021: among the present objectors, the position of Pembroke Council deserves examination. The justification for the “timing” of the recusal order issued by the PA after the vote was clearly fake. There is no doubt that Pembroke Council was forewarned by the PA about the “recusal rabbit” the PA intended to pull out of the hat a few minutes before the start of the June 2021 session; that is why Pembroke replaced the person who had cast the 2018 Pembroke Council vote.

But did Pembroke warn its fellow protestors about this? Apparently not. There is more than a hint that this was the case in the first objection in the present Appeal which, after complaining about the suddenness with which the “recusal obligation” was “sprung on the four 2018 voters”, goes on to say: “…especially because what was being said at the time [5 minutes before the start of the session] was completely different from what had been said and passed on by way of information in an informal meeting held a week before with the same persons.”

Conveniently, Pembroke Council would not have been present at this “informal meeting” as their presence for the PA vote was a fortuitous one arising from the physical location of the db San Ġorġ proposal. But Pembroke Council cannot accuse the PA of duplicity, as it has done by subscribing to the present Appeal. If anything, it was Pembroke Council itself who acted duplicitously, by not warning its fellow objectors of PA intentions about which it was clearly informed.

The current appeal to the EPRT has 22 “AGGRAVI” (AG) – “objections” is the best English translation I can come up with, but it does not feel strong enough. They all end with the same request: that the June 2021 PA approval of db proposal PA03807/17 be rescinded.

Some 5 or 6 objections relate to administrative (mis)behaviour of various types by the PA.  The rest relate to failings in technical aspects of the proposal. These last I will not discuss, as they allege serious incoherence in PA policies relating to various types of “Local Plans”, promised “Local Plans” which never materialised, “Special Entertainment Area Plans” and other denizens of the PA underworld.

That apart, I would put the fourth objection at the head of the list in the belief that that affords a sounder platform for what follows. AG.4 states that the Appeals Court sentence of 19 June 2019 had declared the PA vote of 20 September 2018 relating to the db proposal PA03807/17 to be null and void because of a conflict of interest of one of the voters. The Court had not stipulated a re-taking of the vote, and the PA had not sought to organise another vote within the time limit imposed by law.

The Appeals Court Sentence of 19 June 2019 had therefore wound up the case of the application PA03807/17.  Conclusion from AG.4: the designation given by the PA to the db 2021 proposal, being the same as that given to the db 2018 proposal, is illegitimate, as these are two different projects.

That may seem a trivial point, merely an act of kindness towards the developer on the part of the PA as it saved said developer from having to pay project submission fees again.  So, the demand to have the vote annulled on this score looks like overkill. But I suggest that there were other more important conclusions to be drawn from it which were in fact overlooked by the protestors.

Going back to AG.1: there is a clear account of the twisting and turning of the PA in order for it to be able to spring the “recusal trap”: that is to face four potential voting members, some 5 minutes before the session started, with the assertion that Mr Justice Chetcuti in his 2019 Appeals Court sentence had said that should PA get round to organising another vote on the same project, ie PA03807/17, those members who had voted in 2018 should recuse themselves.

AG.1 ended the list of improprieties with the usual demand that the (June 10, 2021) vote be cancelled. There was no challenge to the basic PA position about recusal, even though there was a clear challenge in AG.4:  that whatever was said in the 2019 Appeals Court sentence, applying to the db 2018 proposal was only valid for that process, which had been closed when PA had not sought a new vote within the legal time limit.

No transfer from the 2019 Appeals Court sentence could be made to the 2021 vote, a fact that the PA had sought to evade by giving the same designation – PA03807/17 – to the two proposals.

No (impotent) moaning about PA shenanigans was required. Just a pointing out that the whole “performance” was illegal. Recourse to such a powerful legal argument merely to refute the use of one PA number for two different projects, rather than to demolish the “recusal rabbit” altogether, requires explanation from the protestors; the more so when the Appeal Court sentence of 2019 did not really issue any recusal instructions at all.

AG.2. Contests the legal position of the person chairing the June 2021 session of the PA Board. The points raised are clear and non-controvertible. They highlight a consistent feature of PA and PA Appeals Tribunal practice: the use of PA employees, usually with a thin disguise of having been seconded to some other function or given leave of absence, to chair PA tribunals and sessions. Though expressly forbidden by law, the PA continues to flout the law by using such “trusties”.

AG.3. In dealing with the composition of the PA board, the law specifies a small number of members, whose absence from any session does NOT invalidate the proceedings; one such for example, is the NGO representative. But the ERA director is NOT included in this list; and for the session of 10 June 2021, the ERA director was absent as he had recused himself on instruction from the PA. The Board, at least by implication, was therefore not legally constituted.

AG.5. The June 2021 version of PA03807/17 being different from the 2018 version of PA03807/17, there was a new EIA commissioned which in fact used sections of the 2018 EIA. The PA is bound by law to inform “third persons” – for which read “objectors” – of the evaluation by ERA of the new EIA. The PA failed to do this, although the ERA director was reported to have transmitted the EIA evaluation some 10 days before the PA meeting.

AG.16. One of the consultants involved in drawing up a particular section of the EIA had a “connection” with the applicant, which connection ensured that he did not meet the requirement of “independence” and “impartiality” required by law. It is worth pointing out that this same objection relating to the same person was put up in relation to the 2018 version of PA03807/17. When this was presented at a (live) EPRT session, the objectors were literally shouted down by the then-EPRT chairperson Martin Saliba (now PA CEO) and by lawyer Ian Stafrace, probably representing db San Ġorġ Property. Partit Laburista MP and advisor to the Cabinet Robert Abela sat at a side table clearly enjoying the spectacle of the objectors being buried under an avalanche of abuse.

So now we are all set for the EPRT hearing on the new db San Ġorġ Property proposal this coming September. No doubt it will provide yet another demonstration of how “different” the present government is from the one before it, of how well the “institutions” are working.

But a quick look shows: the former advisor to the Cabinet – kitchen or otherwise – now Prime Minister; the 2018 chair of the EPRT Martin Saliba, unknown to the public at the time, acting as iudex in causa sua as he was an employee of the PA, now PA CEO and busily engaged in “interpreting” Appeals Court sentences which had showed him up as a twister; the present chair of EPRT, Joe Borg, again an employee of the PA on “leave of absence”, and finally those 22 AGGRAVI.

All these bring on is a loud, echoing refrain: plus ça change…