The public inquiry was clear-cut and unequivocal in its findings: the Maltese State is responsible for the brutal assassination of Daphne Caruana Galizia. The report details a culture saturated in impunity, from its governing politicians to the police force to the judiciary to businessmen to public bodies responsible for safeguarding the interests, needs and very lives of the Maltese people. Into this mix are those already labelled as criminals – the murderers, the bomb-makers, the bank robbers – and the Board of Inquiry does not disguise its horror as it depicts the nonchalant familiarity between those charged with executing the assassination and those at the highest echelons of power, recording:

the casual and safe manner in which anyone who was allegedly involved in the material execution of the crime, openly revealed his contacts with ministers, the Chief of Staff and other people at the heart of power. They were sound in their conviction that in the end they would find support from them and be let off lightly. The mere fact that this mentality existed at the level of organised crime to the extent that the Chief of Staff and the then Prime Minister were referred to as No. 1, “ix-xiħ” (the elder) and “il-king” (the king), is in itself a demonstration of the confidence with which they boasted of the culture of impunity that reigned and though which they felt protected.

The Public Inquiry names the Office of the Prime Minister as the dark heart of this festering culture of impunity, with No. 1, ‘ix-xiħ’, ‘il-king’ – Joseph Muscat, Man of the Year of Organised Crime and Corruption – at its core.

Shortly before the snap election of 2017, when the plan to assassinate Daphne had long been in place, Muscat turned his derisory contempt on Simon Busuttil: ‘if the opposition leader wants his country’s name from being tarnished all he needs to do is go to Bidnija.’ Simultaneously, from deep within his untouchable mafia den, Muscat was maliciously fuelling and stoking the relentless propaganda machine that portrayed Daphne Caruana Galizia as the ultimate and legitimate target for attack, as Enemy Number 1.

Muscat issued his threat while the 3 assassins were waiting for orders to continue with their crime; after Yorgen Fenech had already given Theuma €150,000 for the contract killing; at the same time as Theuma was being given a phantom job at the OPM where he smiled for the camera with Keith Schembri. 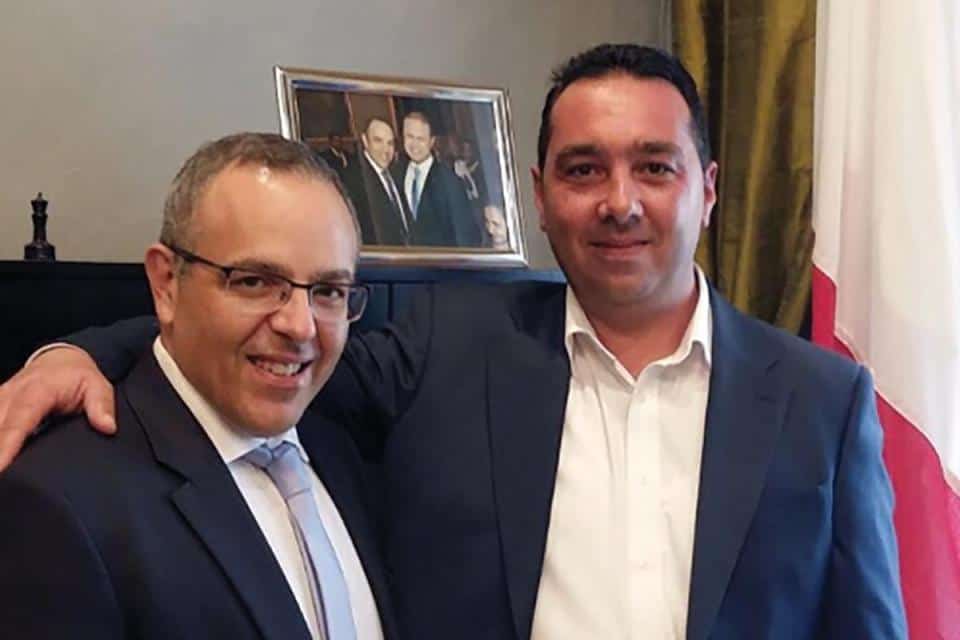 Schembri, Muscat and Fenech shared a WhatsApp chat, doubtless with the same incestuous ħabib as the Ġaħan Laburist hilarity between Fenech and current Justice Minister, Edward Zammit Lewis. Muscat phoned Schembri the night before Fenech tried to escape on his luxury yacht, telling Special K to ‘make sure this guy doesn’t leave’. Schembri phoned Fenech who, in court after his arrest, claimed Schembri was the one who ordered the assassination. ‘Mexxi, mexxi, mexxi,’ is, according to Fenech, what Schembri said while depositing €80,000 into the ‘murder kitty’.

Nest of vipers doesn’t come anywhere close. And that’s without being reminded that Fenech owns 17 Black, the Dubai offshore company that Daphne first exposed less than 3 months before Muscat gave the nod to those who hate ‘traitors’ to ‘go to Bidnija’. 17 Black was designed to pump €5,000 per day into the offshore companies of Muscat’s bosom buddies, Schembri and Konrad Mizzi.

Already cited as the possible motive behind Daphne’s murder, 17 Black assumes central position in that missing page 261 of the Public Inquiry report:

Daphne was receiving a large quantity of leaked emails from Electrogas and she was certain that there was corruption in the contracts awarded to it. She knew of the existence of 17 Black.

Daphne knew that Electrogas was on the brink of failure and in September 2017 she wrote about this. Shortly after, the government came in to give a guarantee which allowed Electrogas to achieve ‘financial closure’ in November 2017, that is, one month after her assassination.

It is probable that if it were revealed, convincingly and publicly, before the assassination, that 17 Black belongs to Yorgen Fenech, the govt. would have been in too uncomfortable a position to give a guarantee, and the future of Electrogas would have been put in doubt.

This without ignoring the fact that the Prime Minister’s Chief of Staff knew full well who the UBO of 17 Black was well before Daphne published the news on the company. This is the conclusion resulting from his own testimony.

It is not within the remit of this Board to establish the motive of the assassination, because that is the competence of the Police. 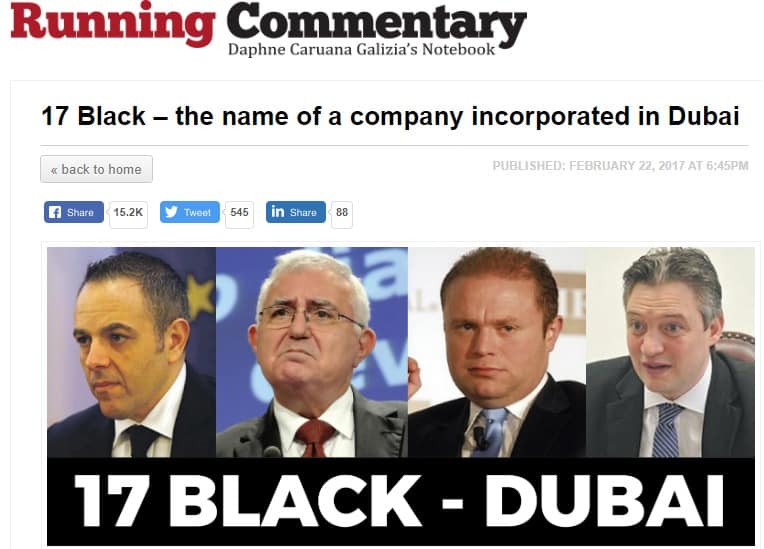 Yorgen Fenech, Electrogas, the government, the Prime Minister’s Chief of Staff – they’re all in there together with this thing called 17 Black which, like the dark heart of Castille, spreads its tentacles everywhere. Likewise, the public inquiry ascribes ‘collective responsibility’ to all the members of Muscat’s cabinet for failing to take any action ‘when specific allegations of offences were published in connection with 17 Black. Surely at this stage no member of the Cabinet can exonerate themself from the obligation they had at that point to assert their will that those involved should have had no place in Cabinet.’ The octopus of impunity wrapped its tentacles tight, suffocating a country and killing the journalist who stood in its way.

The octopus of impunity, and the propaganda machine needed to pump blood around its veins, is now on manic overdrive. It’s greedily devouring all the crumbs it needs to keep itself alive. While certifiably insane, it’s just as dangerous now as it’s ever been. When the emperor is stripped sordid naked, he does anything he can to prove he’s wearing clothes. No change there then from the decades of violent dehumanisation inflicted on Daphne Caruana Galizia throughout her life until the bastards killed her.

Responsibility for Daphne’s horrific assassination has been categorically attributed to the Maltese State in all its multiple and deformed guises. People have been specifically named ‘that are or were in positions of authority on whom there are specific allegations of misconduct, familiarity, and proximity with people implicated in Daphne Caruana Galizia’s assassination, particularly its alleged mastermind.’ This includes Adrian Delia, no matter how much the ‘new’ Peregrin-style PN try to deny this. The names are there in black and white. Like the facts. And the evidence. As Daphne Caruana Galizia said: ‘Facts are facts. You don’t have to believe them or otherwise. They just are. It’s not a matter of faith.’

Implementation of the serious and urgent recommendations made by the Inquiry Board is not a matter of faith either. They emanate from a process which doesn’t only serve as a landmark in Maltese history but provides a model internationally for the protection of journalists right across the globe. The practical implementation of these recommendations is as crucial as it gets unless we want impunity to prevail and more journalists to die.

In a normal country where the rule of law prevails, the independent police force would have sprung into action and arrests would be made. Abela’s cabinet would have been dissolved with mass resignations, followed, of course, by police interrogations. The Prime Minister himself would have resigned and been cautioned before saying anything that might incriminate him. Instead of being undemocratically locked out of Parliament and taking to the streets again in rightful protest, civil society could have had reason to celebrate alongside Chris Fearne’s ‘Labourite on the street [who] wants a quiet and simple life’.

There could have been a glimpse of that yearned-for ‘national unity’ that the President bangs on about with a feeling that the darkest days in Malta’s history might be ending, the careful and rigorous implementation of the Board’s recommendations being its means of escape. Let’s ignore for now the fact that George Vella himself has no place in this imagined spirit of national celebration given his past role as a member of Muscat’s cabinet. Never mind that Fearne’s romanticised Labourite has spent years vandalising the protest-memorial, screaming insults on the street at Daphne’s family, hurling semi-literate death threats across social media and physically assaulting activists when chance arises.

The suspension of Ian Abdilla is barely even a tokenistic gesture of what is needed. It’s a million miles away from anything approximating real change. Right now, Malta is in a very dangerous place because a wounded monster fights back and the taste of blood gives it energy. A hate-fuelled environment feeds off hate and the attacks being mounted against journalists, government critics, and civil society activists have, sadly but perhaps inevitably, intensified.

Criminals cannot pass sentence on themselves. Murderers don’t have the right to set themselves free. As it stands, we have a Prime Minister, his cabinet and an endless ream of government-appointed criminal lackeys who have blood all over their hands. We have Muscat, Mizzi, Chris Cardona, the out-on-bail and too sick to turn up in court Schembri, and that dangerously perverse criminal, John Dalli. And the list goes on because the list is endless because the octopus of impunity spreads its venomous tentacles far and wide.

The findings of the Public Inquiry are bleaker than bleak; its details sordid, grotesque, harrowing and macabre. The recommendations are the only way out and the true means to get justice for the woman and journalist who laid bare the shameful ugliness of Malta’s mafia landscape until the bastards did their very worst.

We know who the bastards are. Every single one of them must now face trial.