He’s accountable to God. So shut up. 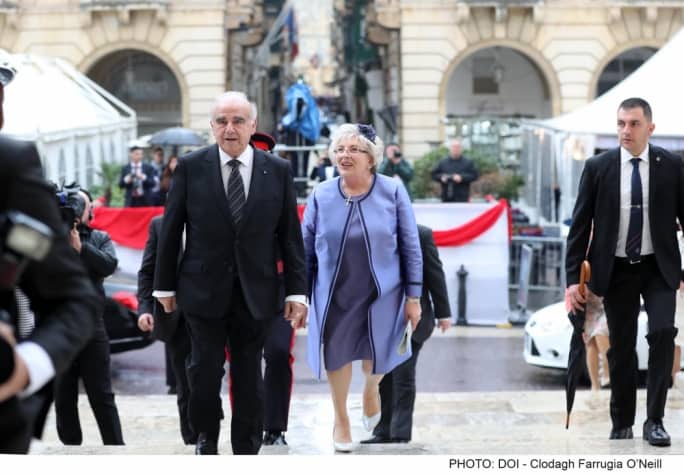 Was George Vella elected president of a democratic republic or made mullah of a theocracy? His comments to Times of Malta today answer that question.

He was asked if he felt accountable for the assassination of Daphne Caruana Galizia given that an inquiry had found him, along with all of Joseph Muscat’s Ministers, collectively responsible for doing nothing about the Panama Papers and 17 Black when the action they failed to take would have prevented the impunity that allowed Daphne Caruana Galizia to be killed.

George Vella replied that his conscience was clear. So that’s all right then. Maybe prisoners being interviewed for possible release by the parole board should start trying that line.

George Vella went further. He was working “behind the scenes” to make sure the Daphne inquiry recommendations are implemented.

“Not all that is being done is done out in the open,” the President is quoted saying by Times of Malta. “As head of state I can assure you that I am doing my duty with a clear conscience. That which I do I do before God.”

Remind me to show this line to my French wife.

This would be funny if it weren’t so tragic. Now it will be up to God to decide whether this Mafia State that used to belong to us is being healed. We can’t even ask questions because we’re assured by the Ayatollah who had done nothing when the Panama Papers were exposed that, on the basis of his conscience, he’s doing what needs to be done.

What conscience, George Vella? Is it the same conscience that allowed you to protect Keith Schembri and Konrad Mizzi in spite of the fact that they were abusing their power, enriching themselves and plotting with a journalist-killer? Because that didn’t work out too great for us first time round.

You know what 3 judges on an independent inquiry think about the effectiveness of your conscience because you can read it in their report. Has God told you different? Has God told you it was ok to continue to prop up Keith Schembri and Konrad Mizzi right up to the moment Daphne Caruana Galizia was killed?

It is true that constitutionally our President is modelled on England’s monarch. But it seems that George Vella is in the wrong century. The constitutional template is not Charles I. The notion that the head of state is in direct and unmediated communion with God and their actions are therefore implicitly justified  and infallible by virtue of that communion, has gone out of fashion the moment King Charles’ head was sliced clean off his neck.

This sort of logic – that policy is accountable directly to a god – would not even apply in the Vatican. A cardinal is facing trial for fraud. It is unlikely that a defence on the lines of ‘God told me to do it’ is going to work very well for him.

Given all we have learnt about what these crooks have done to our country over the past 8 years, you may find it odd that I make such a fuss over a president’s remark that he is answerable only to God. You may think I’m being woke about this and faking outrage clutching at my pearls by force of habit.

But I actually, sincerely, and completely feel this is a new low.

The Maltese State has just been found by an agency within it to be responsible for the murder of a journalist. The Maltese State is headed by a former Minister in Joseph Muscat’s cabinet and like all his former colleagues George Vella utterly refuses to give the public any sign of remorse or contrition. On a personal basis he denies he has any responsibility insisting his conscience is clear. Because that is how responsibility is settled when they’re the ones found wanting.

You can’t tell the tax man your conscience is fine with not paying tax or the judge your God told you to rob a bank. Well, you can. But that won’t stop proceedings.

Politicians found responsible for the killing of a journalist, however, carry a get out of jail free card labelled conscience.

Whatever George Vella may have told Daphne’s widower and orphans after the inquiry report came out at that behind closed doors meeting is between them. I have to wonder how he explained waiting almost four years for an inquiry report before receiving Daphne’s family after she was killed in a car bomb for doing her work. But the answer to that is still private.

The answer to the question on what is happening in the Maltese State to free itself from the Mafia is owed to us, this country’s citizens. We turn to the head of our State for assurance that our institutions are being liberated, the mafia that captured them is being contained, and no journalist or public servant is in any danger of being killed just because they’re on the wrong side of Joseph Muscat or Yorgen Fenech.

Apparently, to be given such an assurance, we need to penetrate another private conversation that George Vella is having. Not with Daphne’s sons. With God.

Mr President, you are ridiculous. And that’s not the worst thing about you right now.