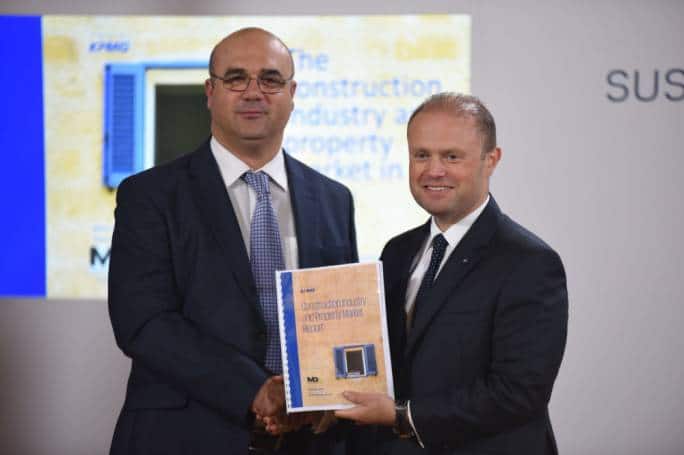 Many have good reasons to take a dim view of Sandro Chetcuti and be wary of what he has to say. Some would stop themselves listening to him because he was a notorious acolyte of Dom Mintoff. Or because he stood alongside Joseph Muscat in that man’s rise to power, brokering contacts for him as the Labour leader plotted his corrupt hostile takeover of the country and its institutions.

If you have some love of country, concern for the way its environment is being squandered, if you are averse to noise and dust, if you feel for workers falling from heights to their deaths or neighbours buried under the rubble of disasters caused by engines digging deep, then, whoever they’re spoken by, you’ll struggle to digest words spoken by anyone proposing to represent the construction industry.

Sandro Chetcuti has been that industry’s face for a decade. Whoever he may be as an individual, he carries the consequences of the justified hostility and scepticism his industry is faced with.

He now appears to have had enough in the role and yesterday he gave a farewell interview to Times of Malta’s debutant Mark Laurence Zammit.

Recently I asked people to do this for me, and I think it is fair then that I do it for Sandro Chetcuti. Park for a minute who he is and why you don’t like him. Strip the views expressed by the man from the interests he has represented for so long. Suspend, if only for a moment, your eminently justified scepticism.

You know how we’re told that the only way out for the country is for the PN to win?

That’s the sort of thinking, of which I’ve been guilty of all my life and no doubt continue to be guilty of in spite of myself, that the answer to any question is a choice between two, and only two, possible answers.

There’s no question that historical experience shows that with the PN in government we are less deep in the shit of corruption than when we’re pulled under by Labour regimes. Alfred Sant’s negligible sojourn is too short to be significant enough to judge what might have been though it had the potential of being an exception.

Dom Mintoff and Joseph Muscat presided over governments by wanton corruption. And their creatures Karmenu Mifsud Bonnici and Robert Abela were utterly ineffective if they ever meant to change that.

But corruption is not ideological. Sandro Chetcuti, I think accurately, and certainly on the basis of his own direct experience empirically, explains that whatever the patterns corruption is nobody’s monopoly.

Officially at least, our political parties have no money. With no money they cannot campaign. Even if they did bother to spend time conducting research, gathering and analysing data, drawing up and debating policy, and innovating the design of our economy and our polity for future years – and by all accounts they can’t be arsed to even try any of that any more – they would need money to externalise their ideas.

Without money they cannot campaign. Without campaigning they cannot persuade anyone their policies are better than their opponents’.

They can raise some money from their support base. But that’s very limited. Very little comes in of its own accord. Most has to be solicited and soliciting and gathering money – a little from many, as the idiom goes – in itself cost money. You need to spend money to call for money, to collect it, to count it, to give account for it. Most of what you collect is spent in the collecting it.

One phone call to the committed pensioner voter returns you a few euro. It takes the same amount of time to solicit cool several thousand from a person of greater means.

Many lucrative businesses in Malta have international ownership or are publicly listed. No ‘sponsorship’ can be solicited from, say, a gaming company, or a bank. Not unless it’s some grey Azerbaijani outfit or some front for the Mafia and that opens a whole other can of worms.

The businesses that can somehow put aside cash and pay it to a political party as a donation on demand are personally or family owned and more often than not, the larger and therefore the more potentially generous among them, will be in construction.

Sandro Chetcuti is making no excuses for construction magnates who ‘donate’ to political parties expecting unlawful rewards in return. You may argue that given what he knows he’s being circumspect and not doing as much as he could to fight this. I think that would be a fair point. But at least in so far as such illegalities hurt some other of his members, his association has been very critical. Consider, for example, their response to the way Silvio Debono got the ITS site for peanuts. There are other examples of him and his association distancing themselves from corruption, and in some cases positively denouncing it.

I’m not trying to lionise him or them. I’m just saying that corruption becomes expensive for those who are perfectly capable of being successful without needing it. Their less competitive rivals get ahead by compensating for their inadequacies with bribes or “donations” paid to politicians which will force the more competitive ones to pay their own bribes or donations simply to be able to do what they could have done anyway.

Corruption then becomes an informal tax, unaccounted for but no less burdensome for that. And though business does not like tax, it likes even less unpredictability of when it becomes due.

I am intentionally not making an ethical and moral argument here though I agree with Sandro Chetcuti that it is wrong to assume that anyone in business is by definition bereft of ethics and morality. We judge them all by the worst among them.

The irony of all this is that donating to political parties and to candidates, not necessarily because they want their pockets lined and they want to live in posh villas and have millions stashed in Panama, but simply because a democracy cannot function without campaigning and no one else is paying the cost, amounts, quite literally, to a tax.

When people solicit money from construction tycoons for their personal election campaigns or for their party, they’re rarely looking out for themselves. This is, indeed, how they appease their nagging consciences. It’s for the party. Therefore, it’s for the people. It’s all right then.

This was at the heart of the collapse of Tangentopoli in Italy in the early 1990s. This was Bettino Craxi’s shallow defence. The other lame defence was that everybody did it. That also was true. Even the Communists, where they had been in governments of regions and municipalities, collected kickbacks from contractors paid into the party’s electioneering needs.

Let them say they’re not doing this if the PN’s leadership is not, even now, as we speak, soliciting money from construction magnates merely to pay themselves and their staff a salary. I doubt there’s a smidgen of intent in their minds to transform those donations into unlawful, illicit or illegal promises. But can they be sure their donors have no such smidgen of intent?

How do we solve this? Simply switching parties in government doesn’t begin to do this.

The change needs to be in the system’s design, not in just another cycle of a dirty laundry machine.

Businesses, construction and otherwise, family-owned or publicly listed, purely domestic or international, should contribute out of their profits for the cost of Malta’s democracy. It is in their interest to do so. It is the cost they must pay for the economic benefit of political stability, sound economic visibility, and the guarantee that the law rules which they need it to, to make their own way to success. Part of the cost goes towards the protection they are entitled to from extortionate people of power soliciting money from them without warning.

But it can’t happen on the back of WhatsApp messages, wads of cash in spittle-licked envelopes, and vague promises of mutual back scratching. That is the still acceptable face of Edward Zammit Lewis on his knees with his nose in Yorgen Fenech’s crotch. Sandro Chetcuti is prompt to remind us that not all business people are Yorgen Fenech. True. Indeed, not all politicians are Edward Zammit Lewis.

But whether we see them do it or not, when they’re on their knees, with their noses in rich people’s crotches, we’re the ones doing the sucking.

Previous:This is who we are
Next:Charity begins at the local church