Nothing fills gaps in the agenda of political parties than stories of divisions in the party they oppose.

For that to work they must set a scene of a Leviathan, a behemoth that properly incorporates everyone who is not them. The line used to be ‘min mhux magħna, kontra tagħna’. Those who are not Labour, must be PN, for example. In this imaginary universe, those who are misrepresented as PN and express disagreement with that false characterisation are then used as evidence that the PN is divided.

Days after the Daphne Caruana Galizia inquiry was published this country should be speaking about its findings. There’s a lot to be said because there’s a lot to be done. The State has been found responsible for an assassination. There’s so many changes to be made after that. But people in power know those changes can’t happen if they’re not removed. So they desperately need us to speak about something else. Anything else.

Consider that the Daphne Caruana Galizia inquiry report came days after we were grey listed by the Financial Action Task Force, dragged to the anteroom of pariah status, just a notch down from mad Kim Yong Un and the Persian Ayotallahs.

Do you actually remember being grey-listed by the FATF? Do you remember a state agency finding Joseph Muscat’s ministers (the ones running your country today) responsible for allowing the murder of a journalist to happen? Do you remember exquisitely tender pillow talk exchanged over WhatsApp between Edward Zammit Lewis, your Justice Minister in office, and Yorgen Fenech, charged with killing a journalist?

No. Right now all you remember is how “divided” the Opposition is because that’s the most important thing right now.

How does it happen? In the midst of all the revelations of intimacy with the mafia of politicians in the Labour camp, is the frankly less interesting news that the Nationalist Party used to have a leader that wanted to hobnob with the mafia as well.

In his position he couldn’t do much to help Yorgen Fenech. He wasn’t the regulator of financial services or the gaming industry. He wasn’t deputy police chief or heading the economic crimes unit. He wasn’t running the planning authority or in a position to allow Yorgen Fenech to build towers in Mrieħel.

Adrian Delia really couldn’t do much for Yorgen Fenech except try to undermine Yorgen Fenech’s critics in his own party. It appears he did what he could. God only knows what he would have done had he been prime minister instead of Leader of Opposition. But then again our struggle to imagine the worst is aided by our experience of Joseph Muscat. The worst.

Whenever this frankly less than interesting news pops up, Labour pounces on it as comforting tu quoque. And Adrian Delia pounces on Labour’s pouncing by making his Joan of Arc declarations of innocence full of sound and fury but signifying nothing.

Labour help him and he helps Labour. Yesterday One TV “stumbled” on Adrian Delia outside the court building as he filed (without advising anyone beforehand) his lawsuit against Lovin Malta. It was an accidental but serendipitous and friendly meeting between a PN MP and a Labour Party camera in Republic Street. They both happened to be there on the hottest morning of the year and they stopped for a chat. 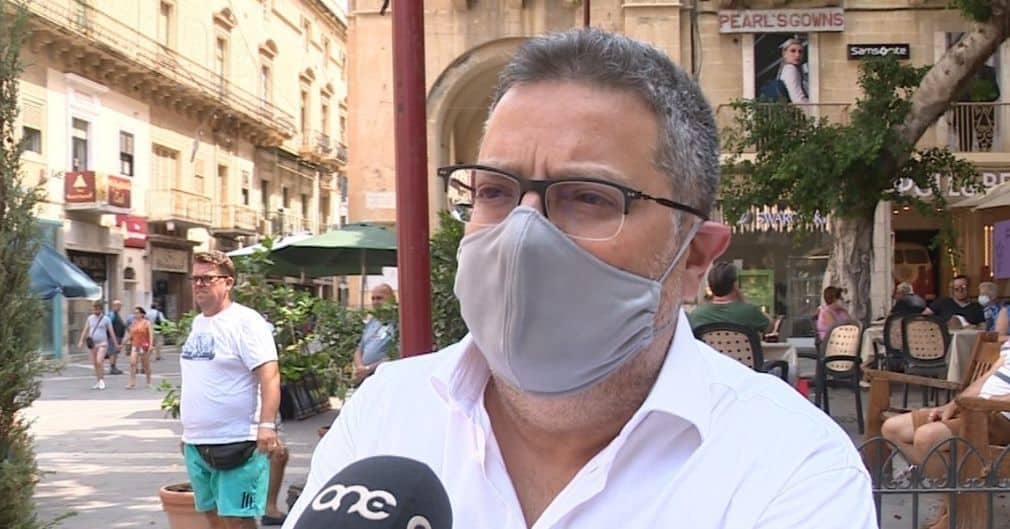 Who’s the idiot that believes this stuff? 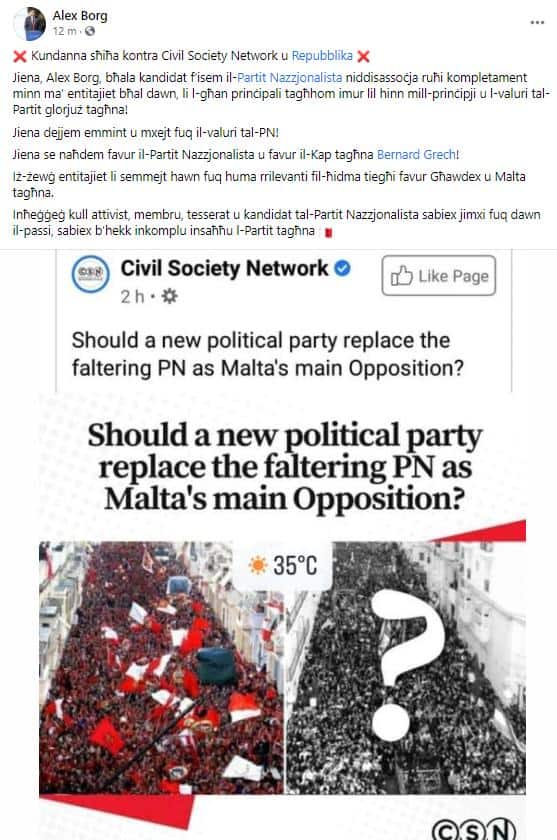 Because of course it’s Repubblika’s fault that Adrian Delia tried to be Yorgen Fenech’s bitch. And, of course, it’s Repubblika’s fault that the fact that Adrian Delia is an MP with a diminishing crowd of proto-fascists speaking of him with the nostalgia of people who buy souvenier busts of a severe Benito Mussolini made out of lava in an Etna tourist shack, is inconvenient to the Nationalist Party.

I don’t think I’ve ever seen Repubblika’s president Robert Aquilina angry but this post of his from this morning, albeit characteristically calm and poised, is positively livid.

A PN candidate, Alex Borg, yesterday condemned Repubblika in reaction to an online poll Repubblika had absolutely nothing to do with whatsoever. It was planted by an outfit called CSN, an anonymous Facebook page that uses the brand of a defunct pressure group disbanded before Repubblika was even set up to make the views of faceless and unknowable keyboard shit stirrers. Quite possibly just one shit stirrer with a password.

I don’t know who the shit stirrer is but if I believe this was a coincidence that had nothing to do with Adrian Delia as much as I believe Adrian Delia accidentally met One TV in Republic Street yesterday.

Christoph Schweiger on Twitter then picked up the other PN officials and candidates applauding Alex Borg: proto-fascist supporters of Adrian Delia the lot of them. (See the full thread).

Gozitan PN candidate Alex Borg ‘disassociates’ himself from Repubblika, an NGO that tirelessly fights for justice. Says the values of ‘entities like these’ go beyond those he cherishes. Says Repubblika is irrelevant. Good to know where the PN’s new candidates stand I guess pic.twitter.com/ST6ZhWHrWi

Naturally, this is not the unanimous view within the PN. Some MPs like David Thake and Jason Azzopardi came out in defence of Repubblika and its role showing a modicum of understanding of the fact that “condemning” NGOs and wishing they ceased to exist purely because their views are inconsistent with yours is anti-democratic and fascist. And these MPs are not fascists. They’re anything but.

The leadership of the PN remains neutral, chasing elusive “unity” rather than taking a side between the fascists and anti-fascists within its ranks. Because you know, one wouldn’t want to justify yet another One TV drama about how divided the PN is.

Shit stirrers. Equivocators. Sowers of discord. Adrian Delia. His manic cronies. Dante places them in the 9thchasm. It’s right there in Canto 28.

Previous:Another reason why we don’t have Electrogas prosecutions
Next:There’s a difference