GUEST POST: The Ghost of the American University of Malta Still Lingers on (Part 2)

There’s been a ghostly silence since the publication of the first part of this investigation on 23 September, the same month in which the AUM was supposed to have its license renewed. There’s been no further response from Clemson University, supposedly in charge of Quality Assurance services for the AUM as set out in the original licensing agreement granting university status to the American Institute of Malta. There’s been not a peep from the NCFHE under its new name of the Malta Further and Higher Education Authority. There’s been absolute silence.

Nowhere on the AUM’s website is there anything triumphantly declaring that the AUM has had its license renewed and it’s nowhere to be found on its Facebook page either. You do begin to wonder what the hell is going on. All that land, all those invisible students, all that money, and no-one can be bothered to inform the public – whose land and money was ploughed into this project – if the AUM, after 5 years in existence, has actually met the ‘rigorous’ and ‘stringent’ credentials to continue operating.

Yet it has continued operating, keeping its head beneath the radar as scandals about Vitals, Steward Healthcare, Electrogas, etc, continue to be unearthed. The last memorable noise disturbing the peaceful ripples of the AUM came from that loudmouth government propagandist, Glenn Bedingfield, the guy screaming blue murder in defence of Konrad Mizzi at the recent PAC.

‘the proven hostile attitude shown against Daphne Caruana Galizia… this hostility was an illicit act that vilified and demonized the journalist. This behaviour could not but have contributed to the creation of a hostile environment, serving therefore as an element of encouragement for those who intended to commit the crime.’

But there was Bedingfield, back in 2019, appearing to speak on behalf of the people and demanding that the AUM ‘give us back our land’ when his government readily shoved all those square metres under the nose of a Jordanian construction magnate with no experience in education. And, as with Vitals Global Healthcare, most of the deals were carried out in secret with confidentiality clauses sealing the Faustian pacts.

According to Martin Scicluna, then Chairman of the then NCFHE, discussions between the then American Institute of Malta and the education commission began in late 2014. Things obviously moved pretty quickly given that Hani Salah only registered his company, Sadeen Education Investment Ltd, in Malta on 11 June 2014. Presumably discussions between Hani Salah and the Maltese government had begun long before, part of the roadmap which began to unfold as soon as the PL took power.

Discussions must have been well underway given that the original Heads of Agreement was signed by Chris Cardona, Evarist Bartolo and Hani Salah on 5 May 2015, one day after the American Institute of Malta ‘first submitted their application [to the NCFHE] for University accreditation, along with applications for course accreditation’. Miraculously quick for a document which, dependent on public land and public money as well as a license from the NCFHE, is still not available in the public domain. 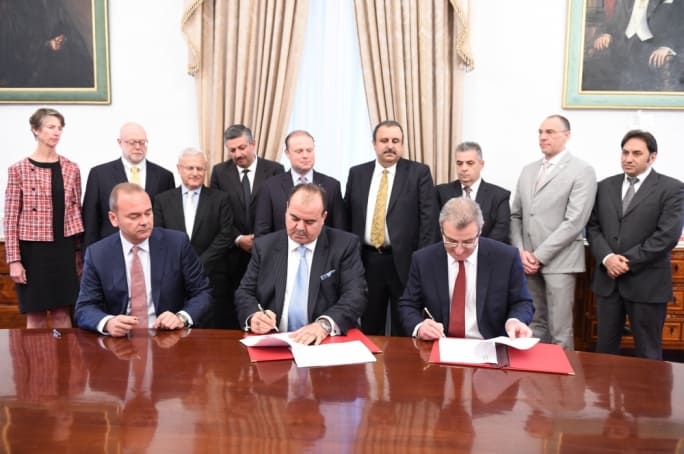 The ‘Project’ referred to in the Heads of Agreement is the setting-up of the AUM in collaboration with DePaul University, an agreement in place by the time the AUM received its license but which became problematic from the get-go. DePaul have now confirmed via email (2/11/21) that they ‘have no current formal relationship with AUM’ and that the consulting agreement, effective for 3 years after the license was granted (16/9/16), was not renewed. The collaboration with DePaul thus ended in September 2019.

This means that the AUM was lying about its ‘partnership and collaboration’ with DePaul University in its 2021 publicity ad, ‘Upholding Quality Standards’. The AUM was lying just as Joseph Muscat lied when he said he didn’t provide consultancy services to Steward Healthcare, whether or not his ‘consultancy fees’ were the financial rewards of a bribe:

The absence of DePaul likely explains one of the main findings of the External Quality Assurance Audit Report conducted by the NCFHE between 13-15 October 2020. According to this, the AUM’s Quality Assurance Policy ‘is in fact a collection of institutional policies in a larger sense’ and ‘has turned into a Manual of Policies and Procedures applicable only for the 2020/2021 academic year.’ Further, ‘The panel has no indication as to when and by whom the Manual and the Policy have been formally adopted, as this information is not part of the documents.’

The contractual agreement with Clemson University is mentioned in the Audit Report but, given their semi-silence and the unsubstantiated nature of their responses, the question remains as to which American universities are still collaborating with the AUM, if any. All of this occurs in the murky context of a license that was up for renewal last September.

The Audit Report also notes the students’ non-existent role in the quality assurance process, breaching the stipulation in the original licensing conditions ‘for the representation of staff and students within the structures of AUM in line with its approved policies and procedures’.

This devil-may-care approach to rules and regulations goes all the way to the top, wherever this actually is. The Audit Report details the confusion arising due to the lack of a president and the ill-defined role of the CEO. The Audit Report stipulates that the AUM must publish its Quality Assessment Policy for 2021-22 on its website, which it does. However, on p7 it refers to the President within the ‘Quality Policy Hierarchy’ and on p8, ‘The Policy and Standards Committee’ is described as ‘the university body that is delegated to promulgate policy and make recommendations to the President regarding amendments to Policies.’ The non-existent President is ‘Chair and Member’ of this committee, one which appears to operate without any external checks or balances.

While students are mentioned in the Quality Assessment Policy, there is no indication of how they’re involved in quality assessment processes and no student representative is included on The Policy and Standards Committee, chaired by the invisible President.

The last President, Dr Lewis Walker, resigned in November 2019 and its current CEO, Zia Alpay, was appointed to the all-American university in March 2020. A Turkish entrepreneur with paltry academic experience, Alpay has failed to reply to an email sent to him on 20 September 2021 enquiring about the AUM’s renewal of its license, its student numbers, and its relationship with DePaul and Clemson. According to an AUM employee, the CEO is rarely present at the Malta campus.

Shrouded in a ghostly silence, the AUM trundles on, with or without a license.

Over a year before being granted its original license, the Government was represented on the Heads of Agreement by Chris Cardona (whose name has now been mentioned in evidence given in connection with the assassination of Daphne Caruana Galizia) and Evarist Bartolo who, while happily adding his signature, later told the Public Inquiry that Keith Schembri led a ‘shadow cabinet’ during Muscat’s reign. Schembri has been implicated in recordings of Yorgen Fenech to have ordered Daphne’s assassination.

‘Mexxi mexxi mexxi’ to Fenech, to Vitals, to Pilatus Bank, to Azerbaijan, to Electrogas, to Nexia BT, and – although the list goes on – to the AUM. Schembri signed one of several secret deals with Hani Salah, promising Sadeen additional land to the tune of 3,022 square metres at Żonqor. Although the granting of this land is ‘subject to a special parliamentary resolution being approved by Parliament’, it wasn’t included in the all-night parliamentary debate which took place the following December and the existence of this contract remained concealed. Perhaps a further parliamentary resolution was envisaged which would be kept as secret as the ‘eventual final deed’ in which the terms and conditions are regulated by this hidden agreement.

As well as waiving any additional ground-rent, the hidden agreement also states that: ‘Government shall facilitate and assist Sadeen to identify parcel/s of land, yet to be identified, having such area as to allow Sadeen to develop and build dormitories which can house a further 1000 students.’

These expansive dormitories are not the ones Bedingfield shouted down in August 2019 as this land already belonged to the AUM, part of the apparent compromise in which, following public outcry, Muscat announced a reduction of the land at Żonqor and the creation of a split-site campus now including Dock 1.

Schembri’s secret Additional Agreement was signed 2 months after Muscat boasted of his government’s willingness ‘to listen and engage with civil society’.

Schembri’s hidden hand was at work 2 months before the all-night parliamentary debate in which public land at Żonqor Point and Dock 1 was transferred to Sadeen. During this debate, Muscat, aka 2019 Man of the Year in Organised Crime and Corruption, asserted that: ‘This will be the most scrutinised economic, educational development project… our democracy has matured to the extent that projects larger than this, more controversial than this, were allowed to be developed with much less scrutiny.’

Much of this scrutiny was carried out by Daphne Caruana Galizia and the scale of the corruption she uncovered has become even more glaringly visible since her assassination. One of those projects, Electrogas, is now widely cited as the motivation for her murder. Added to the scandal already surrounding another ‘controversial’ project, Vitals, is the recent revelation that Muscat was paid €60,000 in ‘consultancy fees’ via Accutor AG and Spring X Media, Swiss firms owned by Pakistani lawyer, Wasay Bhatti. Accutor AG received millions from Steward Healthcare while engaged in its controversial takeover of hospitals from Vitals Global Healthcare.

According to a source cited in the Times of Malta report that exposed this payment, Bhatti ‘would brag during his visits to Malta about his proximity to Muscat and the former prime minister’s chief of staff Keith Schembri.’ Never one to forget a friend, Schembri apparently shared Bhatti’s contact details with Yorgen Fenech, now indicted for the assassination of Daphne Caruana Galizia.

During the all-night parliamentary session transferring public land to Sadeen, PN MP Marthese Portelli reminded Muscat that he’d refused to identify the persons who met Sadeen on behalf of the OPM. Chris Cardona and Evarist Bartolo are proudly on display in the photo capturing the signing of the Heads of Agreement in May 2015. Where’s the photo of Keith Schembri and Hani Salah in October that same year and why wouldn’t Muscat want to celebrate his right-hand man’s achievements in heaping more land on Sadeen’s receptive head? Such a picture would work well alongside that photo of Schembri and Melvin Theuma, the self-confessed middleman in the assassination, and a framed police report of the crimes Schembri has now been charged with: money laundering, fraud, forgery and corruption. 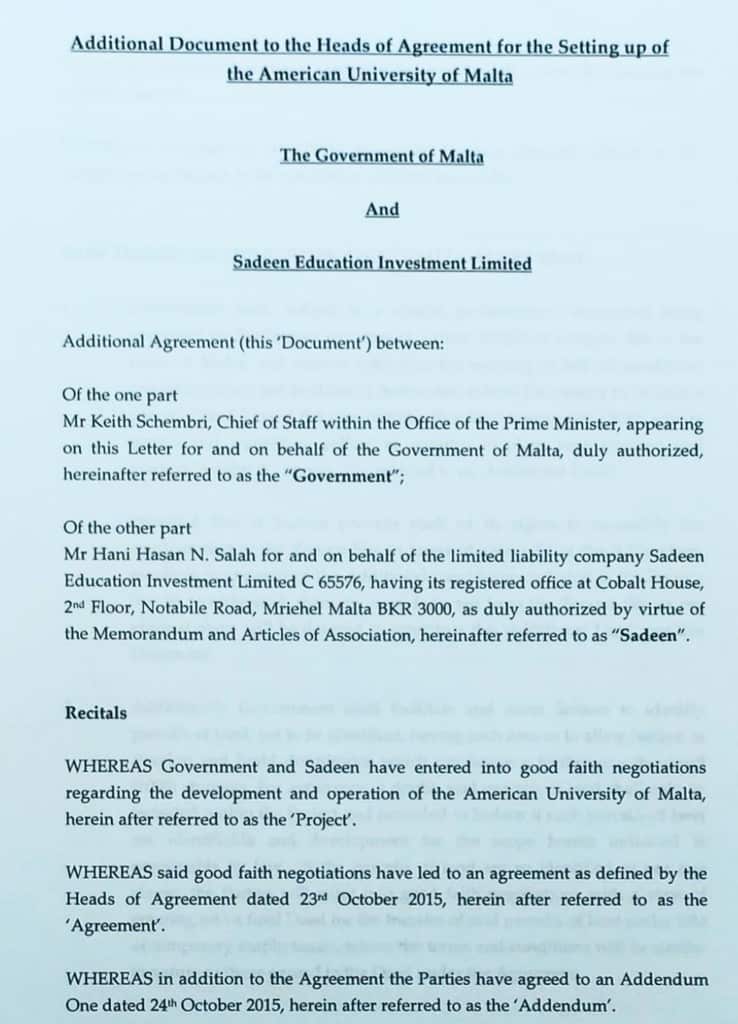 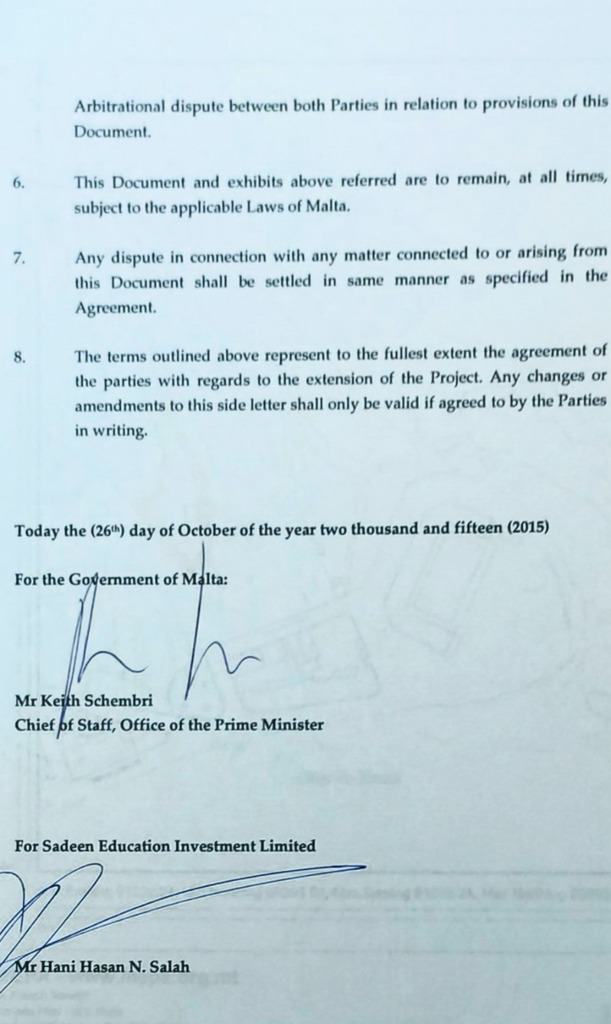