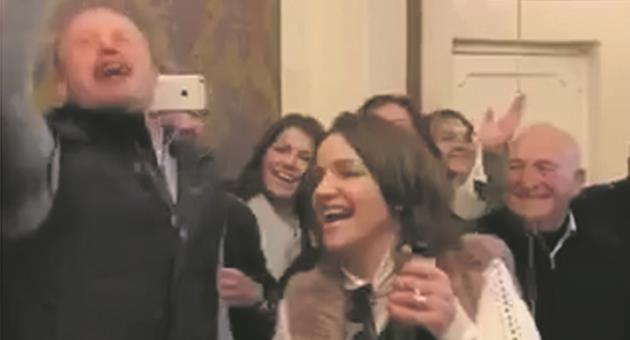 It’s easy to be impressed because this guy was a former prime minister. But this is what anyone feeling the noose tightening around their fate does. Consider the Degiorgio brothers who are facing court appearances for the rest of their lives as they are called to answer for the murders, they’re allegedly involved in that the police know enough about. They file constitutional cases complaining their fundamental rights as often as you order chicken nuggets over the food delivery app.

People who know they are at risk of conviction for crimes they have committed play the victim. It’s the most natural form of gaslighting. We’re born with that instinct. The first thing Adam did when he felt the heat of the first criminal investigation, was to blame God – the investigator – for giving him a woman to tempt him into sin. When the heat is on, blame the guy or gal with the badge.

Joseph Muscat wants the magistrate investigated because she is investigating him. She isn’t really, to be fair. Magistrates’ role is less investigative and more archival. She is collecting evidence and the search has taken her in places that Joseph Muscat finds concerning. He is protesting he is offended by the search. He would be.

He’s lashing out at any figure of hate he can think of. Jason Azzopardi is an easy and obvious one. Robert Aquilina is becoming that as he’s a regular feature outside police headquarters and the court building very publicly insisting the judicial process runs its course. Joseph Muscat says that the fact that Robert Aquilina admitted he heard his house was being searched proves he is inappropriately close to the inquiry.

It does nothing of the sort of course. Joseph Muscat lives on this planet, on this island, in a small village where neighbours live and know he lives there. Word of police rummaging through the house of a former prime minister spreads fast. It shouldn’t surprise anyone that word reached journalists and people that have made their interest in these proceedings very publicly known.

It’s not Robert Aquilina’s presence outside Joseph Muscat’s house that informs Joseph Muscat that the inquiry that has had the audacity to search his home has problems with confidentiality and secrecy. What tells him that is the fact that by his own very public admission he was forewarned of the search, he prepared a file with the ‘evidence’ he chose to exculpate himself, and he coordinated messaging with the prime minister likely forcing Robert Abela to cancel his trip abroad to stay here and stand by his man.

Then Joseph Muscat, again, lashed out at one of his favourite objects of hate, Maria Efimova, who has become a bit of a proxy for the late Daphne Caruana Galizia in the former prime minister’s paranoia. He once had blamed her for undermining his government on behalf of the Russian government. That was only one of the more outrageous accusations he levelled against her.

Now he says she’s received special treatment in comparison with him. I can’t see where the comparison fits. She’s not suspected of abusing power, taking bribes, maybe even misappropriation. She was arrested on the base of a complaint by her former employer that has proven to be a lie and, she claims, she was treated badly in detention. When she gave herself up to the police in Greece she was held in prison for weeks while she defended herself in court from action instituted by Joseph Muscat’s government against her. Twice Greek courts found she needed to be protected out of fear for her life. Her husband faced trumped up charges dropped by Interpol for being politically motivated.

How is any of this better treatment than what Joseph Muscat got?

What Joseph Muscat may have in mind is that this is better treatment than what he expects he might get if justice is allowed to run its course.

He’s determined not to allow it to run its course. That video from his washroom last weekend may not win any film awards next year but he knows the right people will be watching it. His audience are the attorney general who will have to decide on an order to prosecute if the magistrate recommends to her to issue one, the police commissioner, the arresting officers who will ultimately have to pick him up and file the charges against him, and, if it goes that far, the magistrate or judge who will hear the case against him.

And this is where the inequality then becomes striking. Because as stated above, any criminal would play these tricks in desperate hope of avoiding justice. Any day that’s water over the backs of judges, prosecutors, and policemen, the good ones at least. But most criminals do not have a cowering prime minister clenching their pelvic floor at their feet, a loyal party led by overgrown boy scouts wearing tailor-made Hitlerjugend brown shirts, and a mass of trolls baying for blood.

All (alleged) criminals are equal, but

Previous:GUEST POST: Oh, what a show
Next:It’s strange what they find offensive