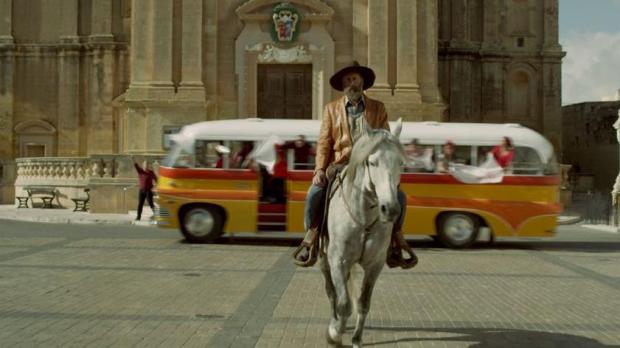 I didn’t think it would have been possible to up my goggle-box watching, but since COVID, I’ve managed. So, when it was proposed that instead of the usual Saturday evening movie (one becomes more of a creature of habit as age increases) we would watch The First Ever Malta Film Awards, I didn’t kick up a fuss. I could watch good telly any time, this was live.

The capitalisation of the name of the show is not in error: it reflects the breathless self-referencing adulation with which the organisers, Johann Grech’s Malta Film Commission, told us a million times that it was The First Ever Malta Film Awards.

I didn’t set out to write about the thing, so I didn’t keep notes. You’ll forgive, then, the randomness of my thoughts.

Now, I know for a fact that a good number of excellent Maltese productions decided not to play Johann’s “great value for money” (but how much money, mate?) game. The makers of “Simshar”, “Luzzu”, “Limestone Cowboy” (pictured) and “Is-Sriep Reġgħu Saru Velenużi” were not there and not because they were not worthy of a place. Quite the contrary, the word on the ground is, the show was not worthy of them.

When asked how much of the Film Commission’s budget was consumed by the spectacle, Grech was more than somewhat reticent. He promised a great value-for-money evening (more about that anon) but didn’t feel it necessary to show us the money. People who know about these things think that many 0000s, many, many 0000s, will decorate the bottom line when (if) the bean counters get to examine the books. One wonders whether we’ll ever get the lowdown on this, given the Government’s enthusiasm for (not) accepting Freedom of Information requests.

After all, the rumoured 20+ tonnes of equipment, platoons of foreign crew, hundreds of pretty lights swivelling about, not to mention David Walliams having to be paid for his valuable time and image, cost many, many €€€s. They spent so much rather than making the dosh available to the people they were supposed to be celebrating, as Joe Azzopardi (“The Boat”) quite rightly and gutsily said after being called on stage with the rest of the crew by the director of the film, Winston Azzopardi, to accept the award.

Not a word about this during the show from anyone else, of course, but the point was well made.

They spent so much and still left people like me wondering how many actual Maltese productions were being celebrated. I couldn’t tell you, mainly because not much of that material was shown: all we got was references to just about the same half dozen shows that felt they could participate, without their product even taking centre stage. I suppose the free and freely available clips from Gladiator were meant to make up for this void. For all the guff about celebrating Malta’s (pretty damn good) film professionals, as it said on the tin (“Malta FILM Awards”) we didn’t get much of that. There was plenty of Malta’s film industry and its history left out, too. Watching this show, you’d think that our professionals are just toddlers venturing out into the world of adults, instead of being respected in the industry already.

They spent so much, you’d have thought that the Commission would have put on an award-winning show, one that would have blown the socks off us, the Great Unwashed slumped in front of the box enjoying the Wolty-Bolty fare we’d ordered.

Buzz … wrong answer. Blooper, blips, blank air and blethering speeches were the order of the day.

It wasn’t all bad, like the curate’s egg, it was good in parts, but if one were to make the point “for this, millions were paid?”, one would not be miles out of place. Some of it was amusing, like when Kurt Farrugia was dwarfed by an influencer who tottered on in mile-high platforms he could have walked under without disturbing a hair on his head. Or when the “professional” lighting engineers and other assorted techies, and not local ones, either, managed to lose one of the presenter’s eyes in her pancake eye make-up, making her look like a star from World War Z.

Or like when we had a parade of cadaverous dark-suited worthies (three Cabinet Ministers, no less) stumbling through their lines and giving us a preview of what the election campaign is going to be like. Frankly, we could have done without Mark Sammut, Jason Micallef, Veronique Dalli, Johann Buttigieg, Jason Micallef, Kurt Farrugia, Kevin DeCesare (whose black tie got lost in his black t-shirt) and so many others, including those Ministers (for the record, a Clayton, a Herrera, and a Vella Carmelo) Mashall “Let’s Make the Best of It” and her Princesses were also there, but they didn’t get to go on stage.

Now, about Mr Walliams: I rather like the guy, and he does good work, not only in entertainment. The thing is, and the faint swish of tumbleweed in a dusty street that greeted virtually all his (pretty good) wise-cracks confirmed this, the audience had scant knowledge of him and all his works. He was getting visibly less engaged as the show wore on, and who can blame him? His delivery and material were pretty darn good, but they were pearls before (mask-less) swine and even a pro like him can take only so many blank looks.

Walliams being involved meant that the show had to be in English. There couldn’t have been any other reason, as it wasn’t being beamed around the world or anything. The Academy Awards it wasn’t, though maybe Johann and his merry men might have thought it was.

Now, I’ve nothing against the language, after all both Konrat Mizzi and Joseph Muscat, to mention but a couple of heroes of the proletariat, use it to impress. On this particular occasion, however, it left the Malta Film Commission with a hearty helping of scrambled egg on its face, because the consensus amongst the chatterers on social media was “what’s wrong with Maltese?”, “why are we so down on our own language?”, “couldn’t they have used one of the excellent Maltese presenters?” and plenty more on those lines.

So basically, Johann’s outfit could have saved itself many a thousand on the presenter. It could have saved many more thousands by using local resources, which after all they kept saying are excellent professionals, and by putting on a show that was fun and appropriate and not something that was obviously a vanity project (pronounced Prohjeckt).

Instead, they hoovered up the budget, and way, way beyond that, starving the industry of vital funding, in order to give the stage to a parade of “Tagħnalkollers” whose only reason to be there was to be seen and to have a reason to pump up their image. The cream of Malta’s film industry was nowhere to be seen. Makes you wonder what was being celebrated, actually.

For the sting in the tail, consider the audience at this glittering event – and glittering is putting it mildly, given the number of sequins that Ronnie and Charlie must have sown into their frocks. Not a single mask was to be seen, although at this time, masks at mass indoor events are still required.

The law does not apply to everyone, some pigs are more equal than others, which pissed off very many people who have to rock up to school or the office tomorrow wearing a mask. You’d have thought they were at a work-event in Downing Street.

Even Walliams noticed, when he quipped about the show being destined to go down in history as the super-spreader event that wiped out the Malta film industry. He got the tumbleweed treatment, of course, the joke whooshing over the heads of the audience, like all the others.