I don’t put up this link to Joe Brincat’s Facebook to add to the case that he’s an antediluvian Mintoffian grotesque. That case has rested a long time ago. 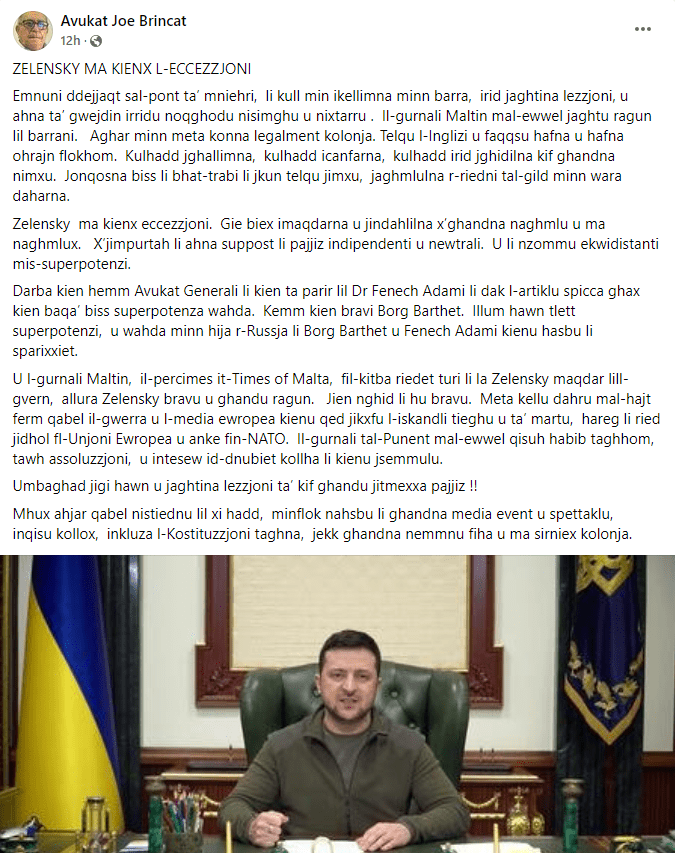 I put it up because it might answer my question of this morning on why Maltese Eurovision voters behaved differently from all other Europeans and did not vote for Ukraine’s song, out of sympathy for the slaughter they are suffering.

Joe Brincat accuses Volodymyr Zelensky of behaving like a colonist speaking to Malta’s Parliament to tell us what to do and where our understanding of his country’s needs falls short of reality. Because you see, you either praise us to high heaven or we play the colonialism card and accuse you of seeking to come here to exploit us.

Joe Brincat misses the painful irony that for centuries, right up to the present invasion, Ukraine has been occupied and if the explanation is to be reduced to colonisers and colonised, they are the colonised.

Then he accuses the local media of reporting what Volodymyr Zelensky said (not TVM and One, of course) for being servile neo-colonialists because patriots would protect the ears of Maltese people from the sound of criticism coming from outside.

Then he says the intervention itself was probably a breach of the constitutional obligation of neutrality and specifically the wording about Malta not being aligned with or against either one of two super-powers. He says Russia is a super-power so aligning against it – as listening to Volodymyr Zelensky clearly meant – is unconstitutional.

There was nothing in Joe Brincat’s analysis about the suffering of the Ukrainian people, and the damage the country is suffering from an unprovoked attack.

All he’s interested in is how it affects us, and he is angry at Volodymyr Zelensky for speaking about his country’s needs even though he was specifically invited to do so. And by ‘effect us’ I mean moderately annoying us by serving us a healthy dose of straight talking, not by forcing most of the population out of their homes, killing many of us, and locking us into a war we did not ask for in our own homes. Who cares? It’s happening to other people.

Joe Brincat thinks that, unlike him, people here lacked courage when they didn’t tell Volodymyr Zelensky where to get off speaking to Malta’s Parliament with a less than submissive and venerating tone.

It’s not people who understood, took on board, and repeated what Zelensky said that are cowards. The cowards are the neutrality clowns that behave like bullies with the invaded country out of fear of irritating the invader, Russia.

The neo-colonialist, slavishly making way for the colonisers, is Joe Brincat, he who never thought selling Maltese citizenship to 1,000 oligarchs of Vladimir Putin was a breach of our neutrality but calling a brutal invasion of a country that did nothing to provoke it by its proper name (a war) is an unconstitutional outrage.

Joe Brincat is not alone. Here’s Labour lawyer Chris Cilia’s Facebook just before Zelensky spoke. Clearly people who phone to vote for Eurovision are not in my echo chamber of social media. But they’re calling Joe Brincat and Chris Cilia bravu and prosit because this has become an uncurable society of self-centred, lazy, ignorant slobs led by antediluvian Mintoffian grotesques. 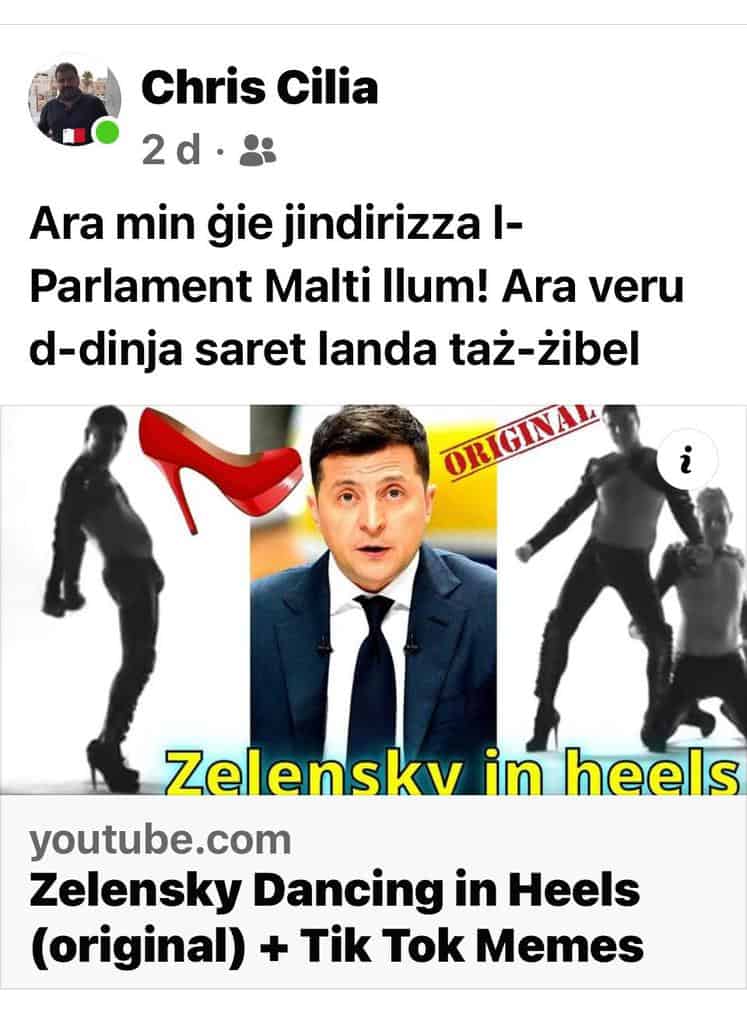 I see this sort of thing and I’m reminded of those famous last words. This truly is despairing.