The eerie silence of Chris Cardona for weeks after the death of Daphne Caruana Galizia was unmistakably conspicuous. But his name came up in many conversations he was not part of in all this time.

That was because, of all the measures of suppression Daphne Caruana Galizia suffered in her life, few were starker than Chris Cardona’s unprecedented use of precautionary garnishees against a journalist’s bank accounts.

That option has been available to people seeking redress for libel for ever. But it took the very specific character of Chris Cardona and (to be fair to the man, the grotesque viciousness of his lawyer Paul Lia) to resort to this possibility. 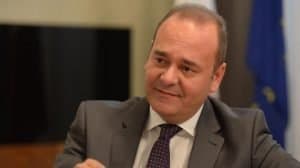 It was so bewilderingly shocking to everyone when it happened that even then, Chris Cardona’s colleagues in Cabinet promised to abolish it from our statute.

It was such an awesome abuse of power that within hours of it happening people raised the money needed for Daphne to continue living.

It was one of those rare moments when citizens here stood up to political power and insisted might is not right.

Chris Cardona and Paul Lia did not flinch. As Peter Caruana Galizia said in Strasbourg a few days ago, Daphne lived her last day on earth without being able to access her own bank account.

Here’s today’s Facebook post from Daphne’s sister Corinne Vella, calling out Chris Cardona after he stood up thinking this was a good time to break his silence.

Chris Cardona deserves no applause for withdrawing the garnishee order against Daphne Caruana Galizia days after she died. The judgement we must express is on the fact that he thought it was a good idea in the first place for a government minister to seek to silence a journalist by putting her in penury.

And on the fact that he continued to think that was a good idea until the day she died.