He posted today his elaborate treatise on the secret agenda of the civil society activists invited by a cross-party European Parliament delegation headed by a Socialist to speak about rule of law in Malta. Here’s his big thesis:

So understand this. I was a PN candidate in the 2013 election and that proves I’m now part of a PN conspiracy with lawyers who included the PN among their clients, a Local Councillor on the PN ticket and other people’s tenuous connections to the PN, past or present. Really? Is that your case. 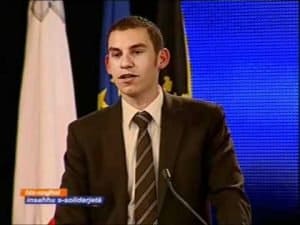 So if you too, Cyrus Engerer, were invited today, you’d be presumed to be part of the same conspiracy. You were a PN Deputy Mayor and a star speaker at the PN’s conference: far deeper than I’ve ever been.

Of course unlike me, you’re embarrassed acknowledging that fact. Because from the PN I moved to speaking out of conviction and you moved to Labour that covered up your convictions and placed you on the public payroll which you cash to mouth your master’s voice.

Indeed, Cyrus Engerer, when they circumcised you they threw the wrong bit away.

Previous:Chris Cardona breaks his silence
Next:Another institution for the chop