The Malta Police Minister looks for help from Turkey

Minister Michael Farrugia knows just which door to knock to get his policemen to act as instruments of an autocratic regime. Labour’s campaign to take-over the police force had various stages. First they decapitated the corps and put on top a blabbering fool. Then they strategically promoted cronies to top positions they were not qualified for. Then they squeezed out competent, fearless officers. Then they re-instated old-timers because of their criminal records, rather than because of them.

And now that no one except the government can rely on the police force for protection, the regime looks like its ready for the next stage.

Here’s Michael Farrugia tweeting today about cooperation between his Police Ministry and the Turkish government.

Farewell talks and further cooperation between Turkey and my ministry with H.E. Mr Reha Keskintepe pic.twitter.com/zhGZlVuWa5

Let’s understand what we’re talking about here. The Turkish police is in the eyes of Human Rights Watch for torture and ill-treatment of detainees in their custody, for abductions and enforced disappearances, and for perpetrating constraints on lawyers. 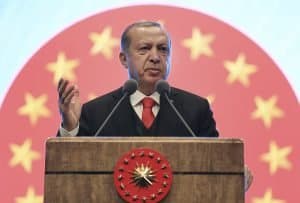 What does a police minister of an EU member state have to learn from the policing methods of Recep Tayyip Erdoğan?

If you think this is far-fetched remember the Labour Party still describes as the ‘Golden Years’ times in our living memory when people were killed in police custody, illegal arrests were a matter of course and the police stood by as government-supported vigilantes ransacked church buildings, set newspaper offices to the torch and chased politicians’ children over rooftops and shot at opposition offices killing people inside.

An autocratic regime does not stop at dismantling a democratic, competent and autonomous police force. It replaces it with something else.

Previous:It is not true that Jonathan Ferris is being protected by the police
Next:The EP delegation IS making a difference