While the entire community of political views, left to right, north to south, across countries and parties, stood to criticise Joseph Muscat for dragging Malta out of democracy and fundamental rights, the spin machine in Castille revved at full throttle to drown the news into drivel and distraction.

The Prime Minister “had a meeting” in Hong Kong was one ground breaking piece of news. A rather caravaggesque photo is distributed showing the prime minister and his tight political entourage speaking with people not related to Ilham Aliyev of Azerbaijan. 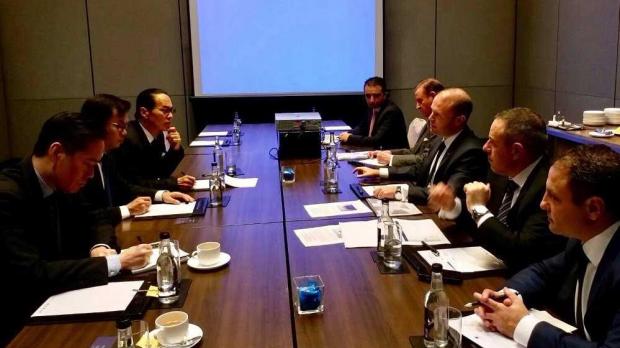 Hopefully this might lead to something more than a photo-op but today that will have to do. The prime minister is shown heroically “working for Malta” in contrast, the narrative goes, with the PN MEPs who used their powers of persuasion to force an entire chamber of parliamentarians, including Socialists, to, against their better judgement, bash Malta because this is how we do it.

Then a spin on the sale of passports. The catchment market will be “more exclusive”, says the prime minister. Not entirely clear what that is supposed to mean. A club that requires an entry ticket of a million euro does not strike me as particularly inclusive and proletarian. But I guess there are degrees of everything. Though more exclusive, the list of new passport holders will, it appears, remain just as secret as the more inclusive one was. So tax-dodgers and fugitives are still welcome as long as they have millions to leave at the door.

On a day when the European Parliament overwhelmingly judged press freedom in Malta under threat, two Ministers and the beleaguered attorney general announce a fresh attempt at reforming press laws. They’ve now done away with the fascist notion of obliging websites to require permission from the government to operate. And they’ve dangled a couple of niceties they’re in no hurry to introduce. First they wanted to double libel penalties. And now they decided they don’t want to double them anymore. Applause for doing nothing.

But there’s more and the hypocrisy is painful. Here are Evarist Bartolo and Owen Bonnici speaking about the liberating initiative of removing the possibility of people getting the bank accounts of journalists frozen while a libel case is being heard. And yet here is Chris Cardona still holding Daphne Caruana Galizia’s bank accounts frozen a month after she died.

These people do not even mind looking like they don’t practice what they preach. As long as they hog the news cycle.

And then dulcis in fundo. When shit really hits the fan, Helena Dalli is wheeled out with some ground-breaking “civil rights” initiative so that civil society can go tie itself up in knots instead of resisting government. This treatment is usually reserved for the PN but the PN is inflicted on itself enough pain already. It’s enough to throw same-sex marriage to have the PN in a bipolar crisis. It takes heavier guns to distract civil society that tends to be rather radical by definition.

But Joseph Muscat has perceived a fragile coalition in the resistance he is getting right now. Radical leftists, greens, middle-class people, intellectuals and the Catholic Church have formed a broad coalition of people calling out the government for its abuse of power and contempt for the rule of law. How do you drive a wedge between them?

Let’s start talking about abortion, as yet a taboo even among those who would favour it if they thought the issue ever had a realistic chance. Joseph Muscat calculates those people are in the civil society protests rubbing shoulders with Catholics and conservatives.

Joseph Muscat expects the same self-inflicted stabbing he relished causing in the PN. Instead of talking about allegations he received 6-figure payments from the Aliyev family we spoke about gay marriage. And now instead of talking about fundamental rights including free assembly, speech, holding of opinion and fair hearing, we talk about abortions.

The cynicism is offensive. It is also, alas, effective.