I used to think I could imagine how it might feel for the spin-doctors and the strategists of a suffering side of a poll to see their numbers stuck. The PN team had to dig deep into yesterday’s polls published by it-Torċa to find reasons for hope and they can’t have found much. Unless of course I can no longer imagine these things.

A 25-point lead should feel insurmountable. That is the gap between those who would consider Joseph Muscat as the right man for the job of prime minister and those who think Adrian Delia would be a better fit.

There are natural disadvantages anyone in Adrian Delia’s place would have had to contend with. People think of Joseph Muscat as the prime minister for the simple reason that he is. Not everyone can make the leap of imagination to think of someone else in his place. It’s like many people cannot visualise what the finished job would look like when you’re thinking of converting a run-down property.

There’s also the fact that Adrian Delia is trying to manage a practically bankrupt business: the party, I mean. Who knows where Labour gets its money from? But it flashes it like there’s no tomorrow. It is difficult for anyone to compete with that, combined with the squandered resources of the state channeled to partisan propaganda.

There’s also the detail that Adrian Delia has emerged from a relatively recent leadership battle. Anyone would have needed time for things to heal and everyone to fall in line and, to mix metaphors, pull on the same rope.

After all Joseph Muscat’s spin doctors and strategists would have had plenty of mitigating circumstances to console themselves with if they achieved a bad result.

They could say that any incumbent suffers from a backlash in support especially soon after an election when expectations are high and disappointing some of them a moral duty.

They could say that the incessant allegations of corruption, and the embarassing exposure and criticism in the international media may have created an artificial downward trend as respondents to the poll pick up on the fallout.

They could say that since he has announced he will not be contesting another election he may have allowed attention to divert to other Labour Party prospective leaders or even the leader of the opposition. 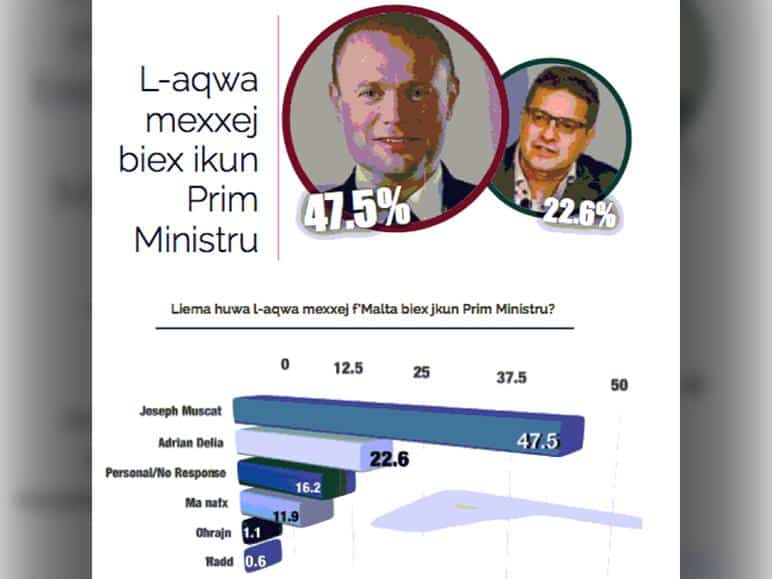 But Joseph Muscat’s numbers show he has suffered no consequence from any of this. At all.

The situation is only slightly worse than it was the day after the 2017 elections. Eight months have gone by in which a lot has happened and yet the fundamental balance between Labour and the PN remains unchanged, or if anything, the PN is weaker.

There were many opinions on what might need to be done within the PN in the hours after that electoral loss. And there was one opinion that prevailed over others.

It was time for radical changes.

First, the new party leader had to be recruited from outside the party. No one tainted by unpopular decisions taken by Lawrence Gonzi or the focused, some might say single-minded, anti-corruption drive of Simon Busuttil, could be allowed to run this party straight into another defeat.

The dogma was taken from the popular definition of insanity: doing the same thing over and over and expecting different results.

It would not be the same again.

Second, the agenda of the party had to change. The nagging negation of the dragon wife made no inroads. All the negativity, the hystrionics, the hyperbole of finding darkness and corruption where bright profit abounded had to be done away with. Keep doing that and you’d be as insane as not finding someone new to not do it.

Third: speaking of agendae, the party’s would no longer be “dictated by Daphne Caruana Galizia”. That required some heavy chest-thumping at first, until of course she died and she was no longer there to dictate anything to anyone. That change proved relatively easy to achieve if only by the unwitting intervention of someone else.

All three objectives, concocted in a smoke filled room somewhere in Naxxar that disappointing June, have now been achieved.

The new leader has descended onto the party like Sidharrta born an adult with giant lotus flowers emerging wherever he steps, no Gonzi or Busuttil shadows to darken his brows. Positivity reigned supreme for plenty of time to the point where the parliamentary opposition looked like it was feasting on unicorns and shitting glitter. Eventually that had to change a bit and some familiar anti-corruption discourse from the dark days of Simon Busuttil has re-emerged. And finally of course, there’s no Daphne Caruana Galizia to tell the PN what to do anymore.

So when where they expecting the results of this new way to start showing? When was the seed they planted supposed to germinate and the sapling sprout out of the ground? Because as Joseph Muscat consolidates his grip on power , now really, would be the time.

As month after month the polls remain depressing, we would all be wise to remember the definition of insanity.

Previous:Slovak investigative journalist assassinated: he reported on corruption in his country
Next:Zero tolerance for corruption