The Times of Malta report on illegal billboards is the fact file you needed if you were still impressed by the government’s insistence they was enforcing the law when they removed #occupyjustice billboards criticising them.

Discriminate enforcement of the law is illegal. The law is not made of the chapter and verse that is thrown at you when bullies armed with guns and hired trucks come to smack you down. If it were, apartheid could be justified because the whites were scrupulous about legislating discrimination and separation.

These were all illegal acts. But they were obeying a higher law, a more fundamental one, one that is at the heart of our contract with the powerful to whom we lend authority so we can live in peace. The law that requires that no other law can breach our basic rights which no one can take away from us because they are innate whether we belong to a majority or a minority, or whether even the matter concerns an individual on their own.

It is our right to tell the government where to eff off. And if the powerful use laws to stop us doing that, they are the ones that are breaking the law. 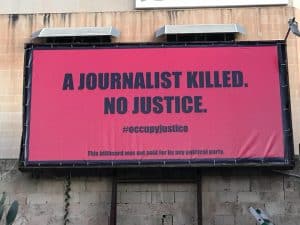 #occupyjustice have explained they broke no laws anyway. They booked with a provider and paid him in full, taxes and all. They signed a contract that warranted compliance with the law.

But the government was offended by the message and moved to silence it and quash it. They looked up what pretext they could use and used it. Their intent was not enforcement of law. If it was it would have been blind to who would be affected and all the many hundreds of billboards out there with something or other out of order would have been removed just as swiftly.

Freedom is the certainty that one’s rights are respected by those one disagrees with. We lost that.

Previous:Meanwhile, also this morning …
Next:Manfred Galdes on impunity in Malta