‘Laburisti sal-Mewt’ is a Facebook group for people who think support for their party is a life-long commitment. Or perhaps they think it’s a terminal illness. Either way they congregate there to live in a world where everyone agrees with them and any traitors in their midst can be made to walk the plank.

It’s not like only Labour Party supporters do this. I used to be part of a group called ‘Kemm se nsibu Nazzjonalisti ġodda fuq Facebook’. Its name may be considerably less morbid but its exclusive and inwardly comforting nature is hardly any different. Indeed at one point I too was found to be a traitor in that midst and made to walk the plank.

It’s unhealthy for people to lock themselves up in a place where they only speak with the like-minded. I’m guilty of it too so I’m not really preaching here. My Facebook newsfeed is mercifully and consciously free of racist bigotry, xenophobia and racial hatred. Anyone who shows up with ‘they’re taking our jobs’, or ‘go back to your country’, or ‘let them drown’ gets the virtual firing squad of one. Facebook makes it easy. Of course the consequence of that is that on line I live in a world where there are no racist bigots, which isn’t a reflection of life.

If you’re not a member of ‘Laburisti sal-Mewt’ you will not know that medical triage and out-patients prioritisation and scheduling at Mater Dei Hospital is ranked, not by clinic criteria, but whether you’re a Laburist. It turns out they run a special VIP service there that provides priority scheduling for Laburisti while the rest wait behind.

You get a VIP number you can call, which is obviously not the standard scheduling number for the hospital the rest of us mortals get, in order for your political credentials to be vetted. And if you’re kosher you’re scheduled for an early appointment behind the last red patient bumping down the blues, the greys, and, shudder, the browns and the blacks. 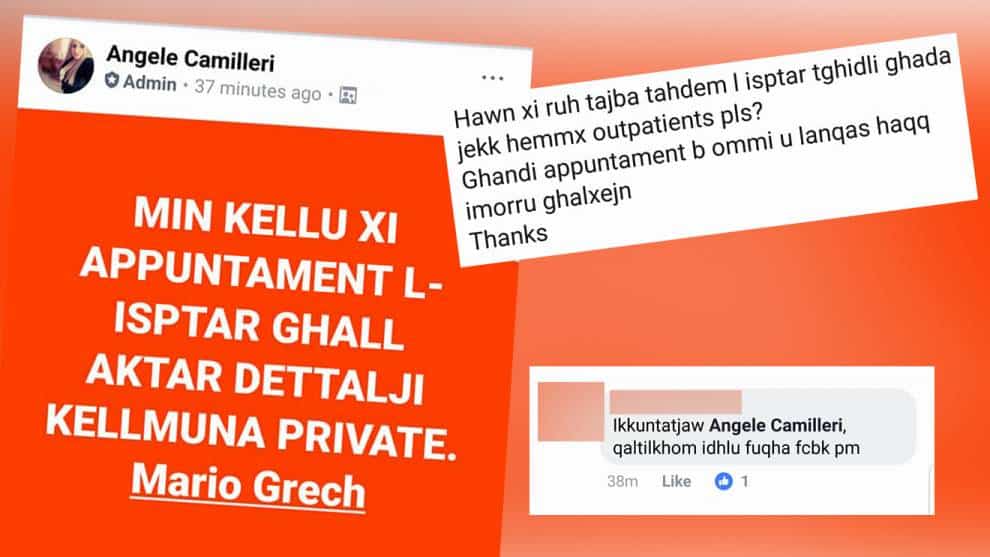 This became particularly painful when the doctors’ union realised that appointments cancelled due to their strike action earlier this week would bring about a double inconvenience to patients that may have very well sympathised with their cause. They not only have to regret causing everyone an inconvenience, they have on their conscience the fact that anyone who is not a Laburist tal-Mewt gets to be doubly whacked.

The tu quoque you get is that Nationalists did the same for their own people in their time so now it’s the turn of the long suffering Laburisti to stay on top. Quite apart of the fact that if that were even true anyone professing this political program condemns this country to an alternation of beneficiaries from corruption and moral bankruptcy, the reality is, no, the Nationalists did not do the same for their own people.

That’s why those Nationalists who thought they’d support their party for just these situations were perpetually frustrated by their party.

This social ranking according to whether you’re a card carrying party member or not is a residue from communist times. That it remains mainstream here really shows there’s a lot to be said for being ‘Laburisti sal-Mewt’.