Permission to say no

Jason Micallef used Labour controlled media to support that woman filmed using her walking stick to clear out flowers, pictures, messages and candles left at the Great Siege memorial in Valletta to remember Daphne Caruana Galizia and demand justice and an end to impunity.

He follows a chorus that includes Joe Brincat, Ray Azzopardi (the Valletta Councillor not the Warda Kanta compere), Emmanuel Cuschieri and several others sparing their political bosses the responsibility of embarrassing quotes saying the same thing.

It is no surprise to me that the government diverts discussion away from the subject matter of the protest to go into discussions about the manner of the protest. I have not laid flowers and lit candles at the Great Siege Memorial in Valletta these last four months to protest my right to lay flowers and candles. I would have thought that was a given.

I was and am protesting against a state of affairs in which a journalist is killed, those who ordered her killing remain at large while the stories she investigated are suppressed as the authorities of the state watch on.

Now if we are still to be called a democracy, protests are an intrinsic part of public discourse. This is especially true in a context where not even Parliament appears to be the adequate forum for the debate of what we feel is the most fundamental aspect in Malta’s political reality: does the law work here?

Jason Micallef and others accuse us of attacking the dignity of the Great Siege Memorial and denigrating the memory of those who died in the Great Siege. I will not go into a rhetorical melodrama about the Great Siege. I will leave the lyrical poetics about inter-generational fights for freedom for Whiggish tourist videos in overdone interpretation centres. Though I will remind that the monument has never been defaced in any way. You may disagree with the landscaping style but we have all seen worse.

The location has not been consciously chosen by someone intending to rub Jason Micallef the wrong way. It was the logical venue to protest the week after Daphne Caruana Galizia was killed – in front of the Courts were people seek justice — and people spontaneously left flowers and candles there at the end of the protest. Then more came and more kept coming.

Though I would hope for Jason Micallef and the others to join us in our demand for justice, I would accept their decision not to. But their intolerance for what is a perfectly temperate, non-violent, respectful protest that goes out of its way to avoid disturbing anyone unduly is truly unnecessary.

Or it would be unnecessary if it was not actually a conscious effort to confuse the issue. The government expected the call for justice and for the end of impunity to fizzle out long ago. It is not disturbed by flickering candles and faint flowers in the dark. The Great Siege Memorial is not particularly politically sensitive either. This is not the Jum il-Ħelsien or Dom Mintoff memorials.

But the government does see tourists flock to the memorial. It sees people who pause to reflect and lay a flower or say a prayer at any odd time of the day. It sees the memorial continue to feature in international news and documentaries from around the world. It sees foreigners who visit on government business ask for directions to the site so they can pay their requests. 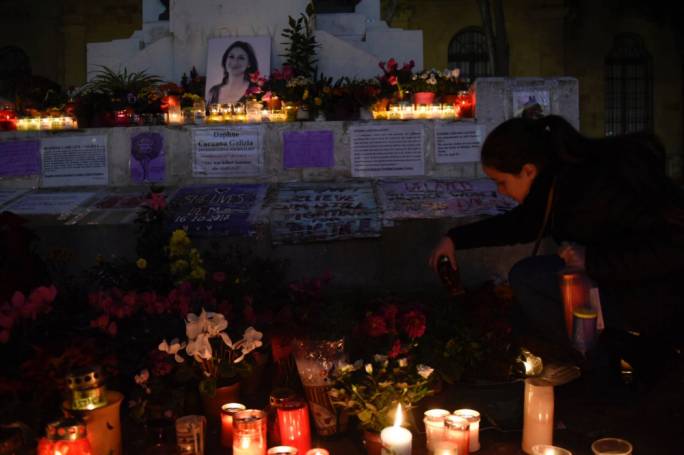 The memorial is a faint but constant flicker opposite the law courts. It is an unavoidable presence as great officials of the state walk up and down Republic Street smirking and beaming pretending nothing is wrong, when everything is.

Can you imagine Konrad Mizzi having his walk with his new buddy down Republic Street? Or how Keith Schembri might feel walking by there shuffling between his restaurants and his official desks?

So when will this end? I can speak for myself. This is no temporary location for me to remember Daphne Caruana Galizia while a permanent full-time location for something in bronze and marble is set up. I’m in no mood to enter into debates with the likes of Jason Micallef about where to put another statue for everyone to ignore.

If I want to remember Daphne Caruana Galizia, and I do every day, I flip open my laptop and go to her website to pick up any random post of hers to laugh a little, or cry a little or seethe in furious anger and remember why I’m so wound up all the time.

But I will feel the need to protest for as long as the impunity and injustice that existed in Malta on the eve of Daphne Caruana Galizia’s killing as much as the day after persists. She wrote about it and we did not protest. She died and it remained there. I feel the duty to protest until real change happens: the change Matthew Caruana Galizia and his brothers called for two days after her mother died when they reminded there can be no real justice without it.

If Jason Micallef’s bosses were not getting seriously annoyed by our protest I would feel it is in vain. Their annoyance and their threats to suppress it tells me that however faint the light from the candles we have lit, the protest is having the desired effect: of making the powerful realise more and more people realise what they’re really up to.

I should therefore like to assure those who put up Jason Micallef, Joe Brincat, Emmanuel Cuschieri, Ray Azzopardi and the rest of them to whip up their supporters’ furious anger against flowers and candles as if they were bombs and cannons, that I have no intention of asking them what manner of protest would not hurt their sensibilities.

By definition one does not ask permission for a protest from those one is protesting against.

Previous:Stand by your doctor
Next:Tales from the Land of Serenity 5