You’re greater than the party 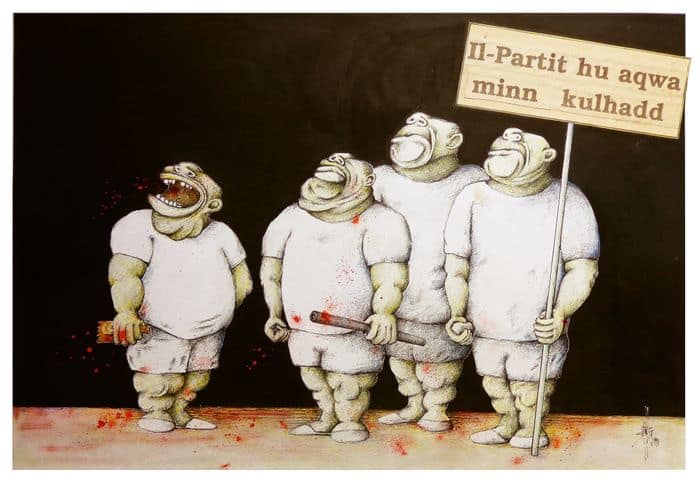 Everyone’s greater than the party. This notion that the party is greater than anyone is a pre-modern residue that must be dispensed with if we are to ever become a modern democracy. We must outgrow even the ambition of forcing hypocrisy on people as a matter of course.

Some greats of the Nationalist Party reminded everyone that ‘no one is greater than the party’. I remember Eddie Fenech Adami using it, though the context of the few times the maxim was invoked was, in my memory, never an appeal to authority to discipline someone or bring them in line. On the contrary, it was always stated as a maxim of self-restraint. ‘I may be the leader of this party, but that does not give me the right to impose my will on it’.

There was another maxim from Eddie Fenech Adami’s time, often used then and seldom, if ever, now: the human person must be the heart of our politics.

When Adrian Delia went on TV yesterday evening, he argued, as he has so many times before, that people must fall in line because the party is greater than they are, than any of them, than anyone.

The party always, right or wrong.

Presumably, because the man has not read a book in his life, he used phrases that have been dropped from mainstream political discourse since Khrushchev managed to take over the Politburo.

He appeals to the fact that he won his position as a leader by a vote of the suffrage of the party members. And, he argues, it is a democratic imperative that his will is followed as the party is nothing but an expression of his will.

And all Members of Parliament are elected by popular vote by universal suffrage.

Everyone has the legitimacy to hold a view, and all views are representative of their electors. There is no greater legitimacy in the views of one official over another. That’s what votes are for.

This is why it is particularly galling that Adrian Delia, who is the only member of the Parliamentary Group to have managed to join that group without a single vote to his name, now refuses to convene that group in fear that his individual will might not be successfully imposed on a majority of them.

He says no one is greater than the party and yet he refuses to convene the organs of the party to take the decisions they need to take. Instead, he rules by decree, perceiving, and expecting everyone to perceive, his authority as that of an absolute monarch and expecting his will to be equated with the will of the party, whatever that is.

That’s not what parties are for. I’m all for party discipline and pulling on the same rope. I subscribe to the idea that ‘together is better’. And I’ll give you an example or two from just this week when a little party greatness would have gone a long way.

On Sunday afternoon a leader of the PN in his senses — that does not panic on demand,  or worse has his loyalties in entirely the wrong place — would have called a press conference to tell Joseph Muscat where to stuff his advice on what to do with Simon Busuttil. He would have said Joseph Muscat should take care of his people and start by firing Konrad Mizzi and Keith Schembri for corruption. Let the PN assume responsibility about how it calls out corruption in government even if it has overstated its case.

Yesterday a leader of the PN in his senses would have called all MPs in his party one by one and gave them a little bit of party discipline, instructing them to simultaneously publish the leaked FIAU report instead of letting David Casa face the risk of arrest and prison on his own. That’s what a party is for. A leader of the PN would have told the MPs: ‘I don’t care if you’re scared; they might think they can arrest David Casa if he was on his own, but they’ll find it harder to arrest the entire Opposition’.

The cartoon with this piece is by Steve Bonello. Reproduced with permission.

Previous:The fog of war
Next:Whose signature is on the certificate?